I'm stunned sometimes by the things I find in bookstores on remainder tables. I know that many awesome hardcovers, no matter how well they've sold, will end up there once they move into softcover. I know books going out of print (because not selling well) might end up there too. But sometimes I feel that bookstores aren't being patient enough.

For example, there's no earthly reason why David Mitchell's Black Swan Green (in softcover no less) should be on the dead pile at . That book is less than 5 years old, David Mitchell is widely understood to be brilliant and he's got a new book coming out next year.

Keeping his books at regular market price is an obvious choice given that many people stock up on the older stuff they've missed when they know a good author is about to be published again, or they're blown away by the most recent book and then have to go collect all the past stuff.

Not that I haven't reaped the benefits of the remainder table. A long time ago, I discovered Barbara Gowdy’s hilarious Mister Sandman on one (which she wrote before she started to suck). I've found books by various obscure (to many North Americans) Japanese authors that I've never seen anywhere except on dead piles, such as Inside my Glass Doors by Sosecki Natsume. I've picked up books that interest me but I'm not sure I want to make the full financial commitment to, such as Rudyard Kipling's Strange Tales and Cornel West's Democracy Matters, both of which I picked up recently. (I don't know when I'll get around to reading either of these, but who cares? They were $5 each and therefore can't invoke much guilt for being neglected.)

I feel that buying books on the super-cheap and then neglecting them indefinitely almost amounts to a victimless crime. No one will be insulted because you haven't read the book they gave you for your birthday/Festivus/Solstice/May Day/your circumcision a year ago; no one will be put out in any way because it's taking you literally years to read the book(s) they've lent you; and you won't be metaphorically (or literally, I suppose, depending on how mad you are at yourself) punching yourself in the neck by getting no readerly return on your financial investment because that book you spent $30 on is just gathering dust. There's really just the minor guilt and the broken back every time you move and have to pack and move 50 boxes of unread books.

I've been a victim of the remainder table in other ways too. I once picked up a copy of E.T.A. Hoffman's The Life and Opinions of Tomcat Murr for $3 only to get it home and find out that one of the signatures had been repeated twice and one was missing. I took it back and every copy the store had was similarly defective. I've never once seen that book again.

I've also taken risks on books that simply didn't warrant the effort. I'd give you an example but the list is so long it makes me sad enough to need a nap to recover. Perhaps on the lovely bench pictured below? 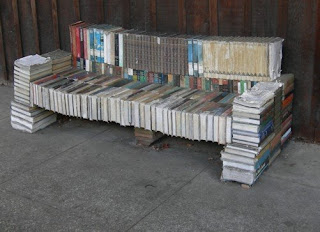 In the end, though, the real travesty is what happens to books after they've failed to sell on the remainder table. Their covers are torn off and returned to the publishers while the books proper are destroyed. Tell me, what's the difference between psychos burning books and publishers and booksellers destroying excess book stock? Temperature is the only thing I can think of.

For god's sake, do something useful like send these books to libraries or remote and small communities whose "libraries" are in some sweet old lady's living room. Make some cool notebooks out of them like these cool cats in Halifax do (sorry, can't remember the company's name but you can buy their stuff at Grassroots!). Or be creative and make a damned bench, or some other kind of furniture, out of them. In any case, don't kick writers in the head by killing their books! Murder will out, it will out I tell you! 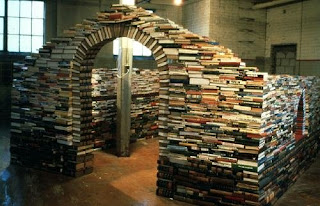 Can I live in this fort? Please?