It is not the job of the novelist to tell us how to read, or why 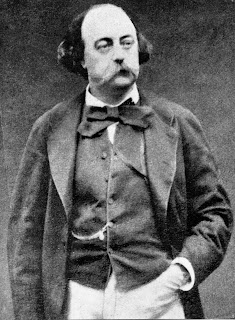 Ladies and gentlemen: Gustave Flaubert. I read Madame Bovary about 10 years ago and didn't enjoy it much; not because I thought Emma Bovary was a "slut" or something, as I've heard so many early 20-something members of the earnestocracy call her since. No, I just didn't think it was a very engaging book. Flaubert (and/or his translator) failed in the case of Emma Bovary and her very real plight to make me give even one tiny bit of a damn, either emotional or mental, about her, never mind any other character in the novel.

I'm sorry to say that, older and hopefully more mature as I am, I've found myself to be equally uninterested in every character of Flaubert's A Sentimental Education. Published in 1869 after Flaubert spent 5 years working on it, this novel is apparently one of the most influential of the 19th century, and was adored by George Sand, Emile Zola, and Henry James. I haven't read Sand yet, but I really disliked the one Zola novel I've read so far; as for Henry James, everything and anything is forgiven in someone who could write like that. If I weren't doing my French Literature Project, I would have taken Zola's approbation of Flaubert's book as a warning not to read it.

A Sentimental Education tells the story of one Frédéric Moreau, a young man from the provinces come to Paris to study and make his name and fortune. He's got some talent, but he's not brilliant; he's charming but prone to make social blunders which others nonetheless forgive him for. He's not stupid but he is remarkably flighty and shallow and generally unlikeable - and yet, his fortune ultimately comes to lie in the way of making advantage "alliances" with women with power and money. Mind, he always holds a flame for one Madame Arnoux, who does eventually fall for him, but won't ultimately go there.

First of all, all these women who either love or want Moreau - why? I never once got a sense of what could possibly be attracting any of them to him. And this is not a simple case of taste - Flaubert completely fails to indicate where the attraction might lie. One thing I really loved about Dangerous Liaisons was that while most of Choderlos de Laclos's characters were essentially despicable, his writing was sophisticated enough to make them incredibly compelling as well. There's nothing I hate more than a boring villain or cad, and I'm sorry to say that I Flaubert writes nothing else in A Sentimental Education.

Besides penning a tale peopled by the incredibly dull, Flaubert also fails to make the historical context in which he set his tale - the 1848 revolution and creation of the French Second Republic - seem anything but a dry exercise in listing historical details. I haven't read many historical novels - or, more likely, I haven't engaged with them enough as such - but having recently read Hilary Mantel's Wolf Hall, I have a sense of what a really good author can do with history, and Flaubert doesn't do it. History itself can come to seem so real as to have a pulse and a heartbeat, or it can seem so real as to cause claustrophobia - but not, I'm sorry to say, in A Sentimental Education.

In the end, this novel read to me like an intellectual exercise rather than as art; in my view, art should savour somewhat of the mystical if only in the execution (Henry James!). That Flaubert had an intellectual agenda in mind when writing this novel seems pretty clear both from the book itself and from translator Douglass Parmée's introduction to this edition. Parmée begins his intro with a series of aphorisms of Flaubert's describing both what he wanted this novel to do and how people ought to read it. I think it's Flaubert's instructions on how to read A Sentimental Education that caused me the most irritation, however: "Don't read A Sentimental Education like children, for diversion, nor for instruction, like ambitious persons; no, read it in order to live."

Eh? Every single character in this novel is either an idiot, a dullard, fatally spineless, or as selfish as a spoiled child - how are we supposed to use such things in our daily living? And how are we supposed to use it to live without taking it as instruction anyway? It is not the job of the novelist to tell his or her readers how to read, or why - and it's a doomed effort anyway. The thing about committed readers is that we will have our own experiences of each book we read, and I'm surprised when authors so completely fail to remember that. It makes me want to punch Flaubert (and maybe Harold Bloom) in the neck a little.

Now, I know it's too late to say this and be believable, but I will nonetheless try: in spite of the above, I didn't hate this novel. I didn't like it much, no, but there were substantial chunks of time in which I found myself reading a pretty good novel rather than a badly executed pamphlet, and those were enjoyable, engaging, and thought-provoking times. In spite of such  moments, however, I doubt I'll make time for Flaubert in the future - such moments were too much the exception.

To redeem my experience of 19th-century literature, I've already launched myself into the second of Anthony Trollope's Palliser novels, Phineas Finn - and so far, so good. But now, I'm off for Sunday brunch in the sunshine with friends.
Posted by Bookphilia at 09:58

Hi C, I had a similar experience with Sentimental, in that I tired of the onslaught of historical detail. I enjoyed your review more than the original, by a country mile. Have a good one. Cheers, K

Hi, I found your blog through Our Mutual Read and as I was slightly incensed that someone didn't like Flaubert, I had to come and check you out! And then I couldn't stop reading your blog! I love your posts on trying to find out what everyone's reading on the subway in particular. Also my husband and I have often talked about running our own bookstore someday (and we're Canadian as well, unfortunately currently in Calgary, where there is less of an independent bookstore climate left), so it's nice to see someone else out doing that. :)

As to Flaubert, the reason I liked Madame Bovary (I'd like to read A Sentimental Education but haven't yet) is that he's trying to portray reality, not just romance. From what I've learned of his life it seems he was very romantic and imaginative but tried to rein himself in and write realistically about what really happens in life, instead of what we wish would happen. As someone who constantly debates the romance vs. reality dilemma (or head vs heart?), I find his approach very interesting. But I do agree with you about Henry James!

I've not read Sentimental Education but I did find Madame B a bit dull in parts and never truly felt sorry for Emma.

I've never had any interest in trying out Flaubert. Just the plot to Madame Bovary sounds stupid to me, quite honestly.

Kevin: I think I wouldn't have minded the historical onslaught if it had been more interestingly presented, and better integrated. Ah well.

Carolyn: Ha, everyone likes Curious/Creepy best...I clearly need to raise my A-game on those book reviews... :) As for realism: I don't mind it per se, but I want it to have some poetry or something in it. Or maybe just a shade lest earnestness. I like those earnest English writers of the 19th century - they still manage to be funny sometimes!

Ying: Soggy! Perfect. See, that's why you're the writer.

Stefanie: Don't bother with this one then.

heidenkind: For me, plot matters much less than what an author does with it, how everything is described...and Flaubert loses me in the execution.

Well, I'm sorry to tell you, but you totally misunderstood Flaubert, and read it in the most naive way possible (i.e. - for entertainment), and took whatever's happening in the novel at face value. You should be aware that Flaubert is a ferociously ironic writer, and precisely because his irony is not immediately obvious, one should try to understand what he had in mind, before reading the novel. Or drop it down altogether.

Look at your comment. Back to﻿ mine. Back to yours NOW BACK TO MINE. Sadly, it isn't mine. But if you stopped trolling and started posting legitimate crap it could LOOK like mine. Look down, back﻿ up, where are you? You're scrolling through comments, finding the﻿ ones that your comment could look like. Back at mine, what is it? It's﻿ a highly﻿ effective counter-troll. Look﻿ again,﻿ MY COMMENT IS NOW DIAMONDS.

i, too, have often wished to punch Harold Bloom in the neck. just stumbled onto your blog and have really enjoyed it. all best.