I have returned from my forays into the wilds of Ottawa and Montreal and have several posts to write about them. Today, I'm going to begin with the most recent past, during which Bookphilia crept about on the Montreal Métro peering over people's shoulders in French. I assure you, creepiness is a universal language. As, thank goodness, is reading. 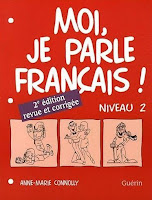 A lady in, I guess, her early 40s was perusing this instructional manual. I wanted to point out to her that if one wants to learn French with any sort of speed or commitment, Montreal is not the place to try to do it. Everyone spoke English as easily as they spoke French and the minute either your (i.e., my) terrible accent or look of confusion revealed you weren't a native speaker, they'd switch to the Queen's English. Freddie Mercury Queen, not Elizabeth Queen.

Montreal is probably my favourite city in Canada and I'd pack up and go if I could. I found great bookstores there, one in particular, but more of that later this week. I would be well-read and fat as hell if I lived there - the veg food is also outstanding.

Le sigh. When I saw someone reading the French translation of The Girl With the Dragon Tattoo (which is much less true to the original title than the French one is - apparently Larsson called this novel, simply, Men Who Hate Women), I despaired a little. It may be a good book; it may be the show-stopping number everyone swears it is. But it weirds me out a little when everyone, everywhere is reading the same damned book(s)!

I want my spying to yield the kind of diverse, obscure, and fascinating results that a deep browse in a super-fantastic secondhand bookshop yields. Selfish of me, perhaps, but there you are.

In spite of my chagrin about this one (and the next!), I am inordinately pleased with this cover. Why is Christina Ricci as Tuesday Addams sporting a lovely necklace of severed heads gracing the cover? Is there something about this book I don't know? Whas she was the inspiration for the main character? Yes? Why, thank you, Thing!

Elizabeth Gilbert, guru of the yoga and non-fat latté set, has a new book out and it's called Committed. It has very recently been released but several people have already come into my shop asking for it.

The lady on the Métro had the English version in hand; it's so new that I doubt it's been released in other languages yet. Anyhow, she was deeply absorbed in it and was thus oblivious, but I noted that I wasn't the only one spying on her. Her book, with its clear display of the Precious on its cover, was eliciting a great deal of interest and perhaps some hissing and rubbing of bony hands. I could also feel the icy stare of Sauron on my back. *Shudder*

AGAIN, with the reading what everyone and their dog is reading, but in French. The Gospel According to Albom is, like most religious texts, translated into many languages and distributed amongst the heathens for their instruction and delight. You may also find it in the drawer next to your hotel bed, along with the Gideon Bible.

I'm curious though: does the book reveal how his revelations came to him? What is the mystical significance of the number five? Will this book teach me how to attain salvation without my having to do anything uncomfortable, like get up early at weekends, be nice to people, or give homeless people spare change? Are there non-fat lattés in heaven? What about Wholefoods?

Such mystical queries are likely unanswerable. However, I'm glad to know that at least two of the five people to be met in heaven will be dressed stylishly in bowler hats and well-cut coats, not to mention wielding posh walking sticks. That sounds like my kind of social club.

Oh, but look! A real French novelist represented on the Montreal underground transit system! The Wikipedia tells me that Levy is the "most read French novelist in the world". Really? Had you heard of him before? I hadn't. No one has ever come to the shop looking for his stuff. Maybe Canada is too small fry to make appreciable differences in world book sales numbers.

I like the cover of this novel. It looks like it might both Deep and True, as well as feature gigantic ninja sharks that silently dive out of the water to grab you and munch your bones. You know, the kind of book that can sit comfortably on both HIS and HERS bookshelves.

And another French book! Have I mentioned that transit riders in Montreal are more readerly overall than they are here in Toronto? Also, maybe it's just a more book-friendly place. I saw just scads of people reading while walking down the street and on transit; and there were oodles of bookshops, mostly French. Did I mention that Montreal is the coolest city in Canada?

Guillaume Musso is another French from France writer. He is also one year older than I am and has published 7 books. Somebody should talk to him about reigning it in a little; he's making me feel like a useless bump on a log. If I felt like a useful bump on a log, I suppose it wouldn't be so bad, but...

Zadie Smith used to make me feel bad for the same reason but I hear nothing she's written since has lived up to her first novel, White Teeth, so I probably won't have to send the ninja sharks to get her after all.

And finally, a real classic writer, also French. My hubby spotted this one; he's apprenticing in creepiness these days and I'm very proud of the progress he's making. I read Guy de Maupassant's short stories a number of years ago and thought they were just fine; however, I can't remember them at all. I do recall reading them in poor lighting and getting headaches. Nothing says classic literature like eyes that feel like they're slowly being pulled out of your head, hey?

I'm disappointed that I didn't see anyone reading any French-Canadian lit. Gaetan Soucy, Marie-Claire Blais - they need to be better represented by the tired 9 to 5ers of the beautiful city. Yes, that's a challenge. But no, I won't be reciprocating with the Toronto writers; they win the big prizes no matter what schlock they barf into their publishers' hands and so don't need my help. (Dear B. Gowdy: I loved Mister Sandman and We So Seldom Look on Love and The White Bone, but I will never forgive you for that pile of shit you titled The Romantic.)

Next, a little tour of my favourite bookshop in Ottawa, because I'm all post-modern in my messing with the chronology of my trip. That's just the way I roll.
Posted by Bookphilia at 14:20

I am really glad to have found you (via the magnificent Y S Lee). Hoorah!

It freaks me out when everyone is reading the same book, too. I felt that way with The Da Vinci Code.

And now I am wracking my brain for the artist who paints the bowler hats. Heaven is like Seurat? Miro? De Chirico? Google suggests "Magritte" but that's not who I'm thinking of. :-(

I love the cover of the Dragon Tattoo book in French, it might even make me pick it up. Might. I also stay clear of the books that "everyone" is reading :-)

I'm sorry you didn't see any French-Canadian lit either, no Nancy Huston? I'm curious if she's as popular in Canada as she is in France.

Back in Chicago, I have to say, the level of reading on the elevated train, or the Brown and Red Line, at least, was pretty impressive.

Once, I was reading Pride and Prejudice, and I noticed that the woman across from me was reading the same book. I asked where she was in the book (she was ahead of me) and insisted that she not tell me what was happening. She seemed to find that amusing. Or at least not too creepy.

Monkey: I'm glad you found me too! I got my mother to look for a photo of me in my Nova Scotia tartan (which I wore a lot around ages 4 or 5) for your project mentioned on your blog, but alas, none seem to exist.

heidenkind: Oh, the Da Vinci Code. When I took over my bookshop, people were still scooping Dan Brown up; now everyone's trying to off-load and I just turn them away - I can't even give Dan Brown away now.

I don't know anything about art, so can't help with identifying the painter of bowler hats.

verbivore: I'd forgotten about Nancy Huston being F-C. She sells really well here in English, if that's any consolation!

Amateur Reader: I have never seen anyone reading the same book as I've been reading. Which, given that I just finished Wolf Hall, is both surprising and maybe a little disappointing.