Why this is hell, nor am I out of it

Summer has arrived in the big city and with it, this past weekend, performances of the entire 23-play Chester cycle. The Chester Mystery plays are a set of interlinked short dramas chronicling the entire span of Christian history as it has and must occur, from Creation to the Harrowing of Hell and the Last Judgment. Such plays were traditionally put on annually in any number of towns in England, with each piece being performed by a different guild; each guild had their own costumes and carts depicting the key scenes of their play. The players were not, of course, professional actors (which came later and helped push the mystery plays firmly out of fashion), but rather guild members.

That the Chester cycle was being shown, in its entirety, this weekend in downtown Toronto was a huge deal and one which I almost didn't know about, until two history profs from NYC came into the shop and mentioned it approximately one hour before the start of the first show! Luckily, I was able to spend part of Saturday and Monday watching plays (in this case, each play was performed by a different company of players, often university-affiliated, from around North America). This may have been a once in a lifetime opportunity, so I'm really happy I was able to drop a great deal (not everything) and spend some time in the audience. 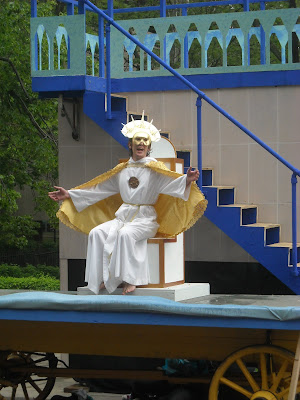 Of the 23 plays, I managed to see only 6 but all were worthwhile, even if quality of performance and production did vary fairly widely. I was lucky to be there for the commencement of the whole event, the play The Fall of Lucifer. The God in this play created the world (what he's doing here) and was disobeyed by Lucifer and Lightbourne, who he casts into Hell.

I really liked the way this actor played God as both benevolent and pleased with his work, but also immoveably unforgiving of his angels' disobedience to his edict to not try to usurp his power. God, at least in this cycle, has a taste for forbidding things and then hiding 'round corners to see if angels or people will feel tempted or not; he's a bit of a jerk that way.

Lucifer, of course, hearing from God how awesome he is, believes it - and goes for the throne when God does said hiding. The other angels know their place - and engage in a fairly substantial discussion about remaining there, which would have had immediate social, never mind spiritual, resonance as class was so deeply and visibly ingrained in everyday social relations in medieval England.

God and Lucifer were both really good in The Fall of Lucifer and I regret not managing to get a better photo of Lucifer. Besides being quite talented, she was really beautiful and her costume the same - as Lucifer should be (to God's stage right here, in the mask with the giant black feathers). 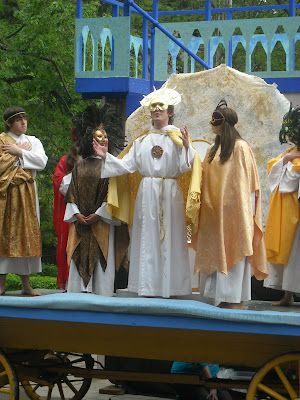 What I think I liked best about Lucifer is how the actress played his fall in a way which would be quite familiar to those familiar with Renaissance tragedy - specifically, with Marlowe's Doctor Faustus. It's not Faustus I'm thinking of though when I say this; rather, Mephistophilis, the devil Faustus summons to do his bidding, speaks of a tragedy more profound than Faustus can conceive of, and makes the latter's pride and desire look absurd:

Faust. Tell me what is that Lucifer thy lord?
Meph.  Arch-regent and commander of all spirits.
Faust.  Was not that Lucifer an angel once?
Meph.  Yes, Faustus, and most dearly lov’d of God.
Faust.  How comes it then that he is Prince of devils?
Meph.  O, by aspiring pride and insolence;
For which God threw him from the face of Heaven.
Faust.  And what are you that you live with Lucifer?
Meph.  Unhappy spirits that fell with Lucifer,
Conspir’d against our God with Lucifer,
And are for ever damn’d with Lucifer.
Faust.  Where are you damn’d?
Meph.  In hell.
Faust.  How comes it then that thou art out of hell?
Meph.  Why this is hell, nor am I out of it.
Think’st thou that I who saw the face of God,
And tasted the eternal joys of Heaven,
Am not tormented with ten thousand hells,
In being depriv’d of everlasting bliss?
O Faustus! leave these frivolous demands,
Which strike a terror to my fainting soul. (iii.60-80) 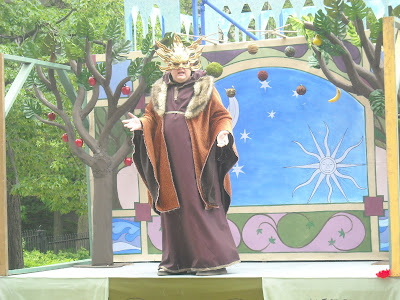 And, indeed, Marlowe was influenced by Medieval dramatic history when writing his most famous play. Lucifer, in the Chester cycle, has no competition for title of tragic figure. Jesus's death is criminal and heart-breaking but not tragic, in the literary sense, for he doesn't bring it on himself.

One of the things I love about mystery play cycles is that the tragic and awe-inspiring exist quite comfortably in close proximity to the comic and even slap-stick. In the second play in the cycle, The Fall of Man, the comic dominated as, even though expulsion from the garden is awful, Adam and Eve are simply too child-like (in both good and bad senses) to be capable of either tragic action or reflection.

They follow the dictates of their bellies and cower in gutless and abject fear when confronted with their wrong-doing; Adam and Eve's naivety are thus easily played almost slap-stick, even if the consequences are horrifying. 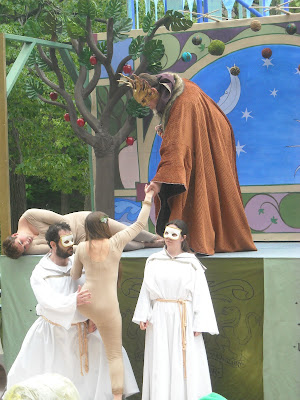 The cart each play is staged on can make a notable difference in what will make performance sense. For The Fall of Man, the key is, I think, in highlighting the innocence and beauty that precede the fall and this cart did this perfectly. Also, there's no way to make nakedness look un-silly unless it's real nakedness (which it wouldn't be, either now or in the Middle Ages), and so playing up the ridiculous is easiest and makes sense really - for after all, how foolish to lose everything for an apple! (Photos: above is God as imagined by this group of players; to the left is Eve entering the garden after being created from Adam's rib).

Nonetheless, by the play's conclusion, the irreversible nature of Adam and Eve's transgression becomes terrifyingly clear as the same actors (some seen in white here) who baaaah-ed like sheep when God was making the world plentiful, become angels of doom and vengeance wielding swords of fire.

And that's the thing about masks - they allow individuals to become secondary to the roles (both literal and dramatic) they play, which is part of the Mystery plays' larger conflation of the history of real, individual people with the history of God's world. 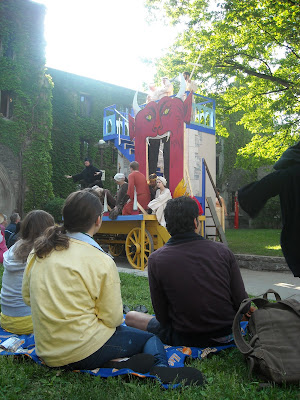 This dramatic conflation of the individual and the historical is nothing less than a playing out of medieval England's dominant mythology of its identity within the continuum of religious history. The personal nature of history (and future, as the cycle nears completion) is crucial to the effectiveness and power of mystery cycles for it shows us precisely what we're up against, both in terms of past transgression and future trials. On Monday morning, I began the day in the 0800's with The Harrowing of Hell, in which Christ opens the gate of hell to pick out those who deserve salvation, etc.

The hell mouth seen here, which is very nicely reminiscent of the hell mouths known to have been used in medieval drama and into early Renaissance drama, is meant to focus audience attention precisely on where they will be when the harrowing begins. Besides seeing people on stage with whom they would have interacted normally in their everyday lives, the fourth wall of the stage is constantly being crossed as demons creep up from out of the audience (one hissed quite loudly in my ear, to make me think on the state of my soul) - in other words, the gate to hell, through that gaping and toothy mouth, is not very far away at all and maybe more importantly, not metaphorical.

This emphasis on the personal and immediate aspect of the history of the world is best emphasized, however, by the structure of the cycle as a whole. The carts used are moveable and as one performance finishes and its cart is rolled away, the next is moving inexorably forward to take its place; further, while watching one play you can hear the voices, screams, music (often ominous drums, as the cycle winds down) of the cart that follows which, while its play is being performed simultaneously not 100 feet away, will come forward and be performed again in front of you.

Way back in the day, I wrote an undergraduate paper on three of the final plays in the York cycle (all the mystery play cycles tell the same basic story of creation to judgment but show really interesting local differences). As I recall (like I said, waaay back), I focused on the staging of The Last Judgment, put on by the butchers and staged near their shops so that as audience members watched the final word on God's judgment of them and the world, random animal body parts would be floating by on a river of blood! Really, there's no wonder I ended up focusing on drama in grad school, is there?

Being able to sit outside (on Saturday, in the rain; on Monday, in the glorious sunshine) is something that really should inspire me not only to get outside and read more there but also to take in more outdoor drama, of which there is no shortage here. Now that I know I can read Shakespeare, I'm sure watching some Shakespeare in High Park wouldn't kill me - unless the acting is atrocious, of course; but then, that would give me lots to write about...
Posted by Bookphilia at 14:19

I've never seen any of these, but I know that my home town, Coventry, puts on Mystery Plays every three years or so (possibly alternating with York and Chester?). Of course, the ruined old cathedral, bombed by the Nazis, would make for a very suitable setting...

I have read mystery plays but never seen them perforemed. i an guessing that they are quite aspectacle.

What a great thing to be able to see!

Tony: Every time you post here lately, you just reveal one more cultural thing in England you missed out on before moving to Australia...Are you feeling homesick?

Hannah: They can be, but the effort has to be made with the costumes and the cart. The last play I say was actually a huge letdown in both regards.