So, I have finally begun my French literature project, having slowly made my way through The Song of Roland - which required 3 copies of it from the library. The first copy was too marked up to be readable and the second was too completely unfootnoted and insufficiently introduced to make sense to a complete medieval French literature novice like me.

In the end, it was the Penguin Classics edition that satisfied, and I think this ordeal and abuse of library resources was a valuable lesson: until I get into the 19th century, it'll be nothing but Penguin or Oxford Classics for this French lit project.

The Song of Roland was likely penned around 1098-1100, but is based on a relatively minor incident in August of 778 (if you consider death and destruction minor). Charlemagne was making incursions into Spain at this time with various success; at the particular time of the incident in question, he was leading the Franks out of Spain when the rearguard was ambushed by Basques and slaughtered to a man.

Roland was apparently the (failed) hero of this battle, although the various editions of the poem I've looked at have differed on whether or not Roland was a real person, or if he was, if he lived at the same time as Charlemagne.

In any case, the tale as it is manifested in this epic poem is being mobilized quite strenuously to justify the Crusades and Christian antipathy towards Muslims, and therefore France's militaristic/imperialistic adventuring in foreign lands. I'm sure scholars have been all over the imperialist rhetoric in this one, for it's like most of the epics I've read (Paradise Lost notwithstanding, although even that has weird imperialist stuff going on) insofar as it's about vilifying/grudgingly admiring the Other (for if they're not at least somewhat admirable, kicking their asses doesn't look as good on Us) and seeking the glory of Our nation.

The Song of Roland, however, is also about the terrible choices individuals make in battle, and the far-reaching consequences thereof. In a sequence positively Shakespearean in its pathos, Roland refuses to blow the horn that would summon help to defeat their attackers, everyone's killed, and he's left to wander - entirely alone - amongst a field piled high with thousands and thousands of bodies, to confront directly the results of his hubris in imagining his small Frankish train could win against such superior numbers. A poignant moment, even if the power of the language (that I imagine is present in abundance in the medieval French original) is pretty much entirely lacking in the drab modern English of the Penguin Classics edition.

On the other hand, there were moments when I laughed a little at Roland and I honestly don't know if he was meant to be understood as somewhat foolish or entirely tragic (if the latter, I'm not convinced, but then this poem wasn't written for me, given as I am not up for a little Crusading, thank you). He faints a lot in the face of great grief, which to me doesn't seem like an appropriate response when in battle; when he realizes he's going to die, he arranges himself so that when his body is found he'll look extra heroic for being ahead of his troops in relation to the enemy; and he dies, not from battle wounds, but from bursting his temples due to strenuously blowing the horn (much too late) that would have brought help. He died of a bad headache? Are you sure that this wasn't a satire? 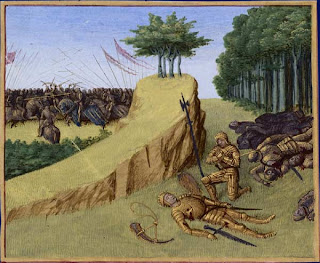 The editors three of this poem have said nothing of the possibility of this being a send-up and in fairness, it was never treated as one; indeed, it's well-known that at the Battle of Hastings, someone went on the attack singing parts of The Song of Roland. But then again, Ronald Reagan wanted to use "Born in the USA" as his campaign song, so it's not like people don't sometimes miss the point when they're on the hunt for some musical propaganda. 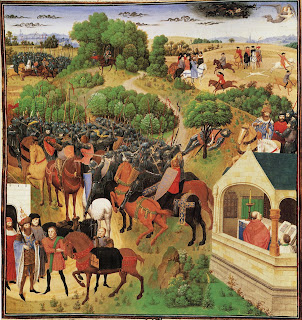 In the end, I enjoyed this more in an anthropological than a literary way, but I suspected this might happen with translations of the very early stuff. But I'm still keeping my fingers crossed that Chretien de Troyes' Arthurian Romances will be a rollicking good read.

PS-Please let me know what you think of this stretchy new layout - is it easier to read? Harder to read? The same? Prettier? More charming, but less sincere? Any feedback will be helpful!
Posted by Bookphilia at 07:19

Hey DreamQueen :) This post is awesome - your attention to detail and how clearly you explain your responses makes it engaging and really gives me a sense of how the experience of reading this poem was for you (doesn't that sound like something a prof would write on an undergrad essay?).

The pictures are really cool :)

After giving it a little more time, I like the stretchy format, but only if I make my browser window narrower so that I can set my own right-hand margin.

As for further adventures with French literature: bonne chance!

Sounds like a pretty interesting project... And a logical start to it as well. I'm looking forward to seeing where this goes.

Great post! This one is on my TBR list and I'll feel quite oriented when I get there.

I am a new visitor so not qualified to speak on the new layout. But I do appreciate a quiz that includes "More charming, but less sincere" as one of the choices. :-)

1. You hone in on exactly what makes Roland human, despite his not being quite human. My favorite part of the story is when he tries to break his sword - heroic or pointless?

2. Yeah, I suppose it's meant seriously. But not too much later - 300 or 400 years - Boiardo and Ariosto have plenty of fun making Roland look ridiculous, whether he's Inamorato or Furioso.

3. The new layout looks good to me. I love the illustrations in the post.

4. Wait, hang on, not so fast with those Penguins! I recommend:

Galway Kinnell's translation of Villon;
C. H. Sisson's tr. of Du Bellay's The Regrets - this masterpiece is really worth tracking down;
the Molière of Richard Wilbur and/or Donald Frame.

Fascinating review. I am so unfamiliar with this area of literature, so I don't have anything to add except to say that it is a great introduction to a whole new world for me. I do like the new layout but I liked the old one too...so there you go...me not being helpful.

Yuri: If I had an undergraduate write so much about their experience of reading something, I'd give them a very bad mark indeed. But thank you for the compliment!

An Anonymous Child: I'll be reading Chretien de Troyes' Arthurian Romances next...and the list on the left side of the blog isn't even close to complete yet. I've been too busy to put in the rest of the list as it currently stands.

J.G.: So many things could have "more charming, but less sincere" as a possible descriptor - how could I possibly narrow it all down to one quiz? ;)

Amateur Reader: I'll look for the translations you suggest - thanks!

I'm not sure how I managed to get my degree in French literature and never read La Chanson de Roland...extraodinary isn't it? Let's blame the professors :-) Although I guess there is just so much to choose from. You are definitely starting in the right place and I look forward to reading your posts as you work your way forward in history.

The only French book I've read, in French, was Candide by Voltaire. I'm really not very well versed in them, but I did enjoy my English translation of Madame Bovary which I just reread this month. You encourage me to step out of my normal routines!