In which I barely address the book in question

I was supposed to be doing a 24-hour read-a-thon right now but illness and overworked-ness have put the kibosh on that. While kick-ass bloggers BookPsmith and Raych are read-a-thonning and blogging away, I've barely managed to read 13 pages of book today. 13 pages!! What am I, 5? Is it time to watch Battle of the Planets (go, G-Force, go!!) and books be damned?

No, I'm just knackered. Knackered. A good word. It makes me think of being kicked and punched a bit and that's sort of how I feel. My sweet hubby got sick earlier this week so I've been trying to take care of him, and I'm doing a fast and thorough inventory of our entire bookstore (with friends, thank gawd), and I'm a bit sick myself. It's mush I tell you.

The good news is, I found my missing Old Peter's Russian Tales, which I hair-tearingly misplaced with only one story left to go. Yes, said story was the 13 pages mentioned above. Pathetic.

I think most people read this one when they were kidlets but I ignored its presence on hubby's shelf until I read a YA novel based on Ransome's life, and then I became intrigued. I enjoyed Old Peter's Russian Tales, full as it is of fairy tales which are fantastic in the older sense of the word, i.e., they don't make any sense at all and don't need to.

I think, based on Sedgwick's novel about him, that I would like to read a biography of Arthur Ransome. And having read one biography in full and concluded that I didn't want to know that authors I liked were complete jerk-faces, that's saying something. But I probably won't even look into it because if you could see the book queue I've got going AND there's the fact that I'm currently reading 5 books...well, it's just too much.

I haven't said much about Old Peter's Russian Tales, have I? There isn't much to say. The stories were enjoyable the way fairy tales are. I especially liked "Tale of the Silver Saucer" which was lurid and bloody in the ways I think fairy tales should be.

Now, it's time for me to go back to bed. Peace and love and non-caffeinated energy sources to all you 24 read-a-thonners! I'll be with you next time! 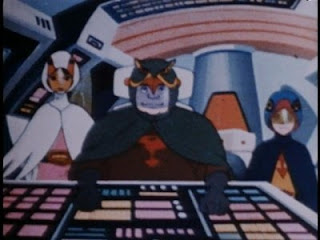 Bat-shit fairy tales are my favorite. I swear this one will cure what ails you.

Hee hee...you said jerk-faces. Maybe because I have been reading too much today but that made me giggle maniacally. I was worried about that book you lost...something like that would drive me crazy until it was safe in my possession once more. Another thing that drives me insane...illnesses that have overstayed their welcome (of course they are not really welcome in the first place, are they?). Wishes for you and your husband's returned good health.

I hope you feel better soon.

Battle Of The Planets! Woot! ( Go Katchemon, Go!)
I love anyone who manages to reference BotP's from nowhere and out of the blue!

Hope you're feeling better though and haven't succumb to the dreaded lurgy.

sorry You didn't get to join the read-a-thon.

so do used book stores.

Having made timid forays into Russian literature via Dostoyevsky and Pasternak (both immensely rewarding), I somehow never considered the idea of Russian childrens' lit. (Well, I knew there was such a thing in theory, of course, but as Raskolnikov's soul trembled in dread at his fate, tales for tots never entered my mind.)

But hey, I guess the Russians love their children too ;)