Thursday is the new Friday

I can't tell you how GRATEFUL I am that tomorrow is a holiday AND that I had the prescience to decide to close the store for the entire Easter weekend. I'm half dead here, people. You won't believe it but it's true: I'm just too tired today to read my fat 19th-century novel, Ivanhoe.

I don't blame you for being dubious about this claim; I can hardly countenance it myself. The store's empty, I'm lazy, it's Friday eve, and most importantly, Ivanhoe is a really damned good read. And I'm 3/4 of the way through! And Rebecca is in serious need of rescuing, stat!!!!! But I'm too pathetically tired. Ivanhoe is an adventure story but it also requires active mental engagement and I can't supply that right now.

My lack of brain action requires something simple, and what could be simpler than the short stories of Raymond Carver? Back when I was a teen, Carver was quite popular, but I somehow missed that boat and am now reading him for the first time. I just read the first three stories in What We Talk About When We Talk About Love and they were fine. Not much happens. There's not much writing. It's all pretty much not much of anything. But it's inoffensive and I'm tired so that's all I can reasonably ask for at this point, I think.

But the introduction of this Carver book into my current reading list brings my active book number up to 5, which I feel is dangerous and irresponsible. Someone could get hurt, maybe even me. My instinct tells me that I'm reading too many books, but since 4 out of the 5 are collections of short pieces, it's not as critical as trying to read more than one novel at a time. But how many is too many? 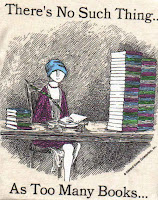 Edward Gorey, even though he's dead, insists that the the phrase "too many books" is an oxymoron. Theoretically, I would agree; but I have to say that 5 is, I think, the farthest I've ever taken things and really, I'm feeling a little intimidated by my own ambition in this regard.

But maybe I could read many more than 5 at a time if I were able to don the protective gear of a 1920s flapper girl, like the girl in Gorey's instructional drawring here. If I had a hat that cool, maybe I could do anything!

What say you? What constitutes "too many" when it comes to books? What number of books in the currently reading pile would make you throw up the white flag in ignominious surrender?

PS-In case you're wondering what happened to my French literature project, I'm poised to begin it but I came up a very annoying road block: I ordered The Song of Roland from the library and it arrived but it's so full of highlighting and inky annotations that I can't read it. So I've ordered another copy and am waiting on that. People who write in indelible ink in library books should be subjected to the thumb screws, dammit!
Posted by Bookphilia at 15:41

Of course I will drop by during the read-a-thon. Are you nervous? I'm a little nervous. I love to read but haven't attempted reading for 24 hours straight.

Two books at a time is my limit and one of the two has to be a collection of some kind (short stories or essays). More than that is crazy making for me.

Your library book experience is going to have to go in the same category with the tissue-dropper...Things You Should Have Learned as a Wee-One...1. No littering and 2. No writing in library books.

I have not read Ascending Peculiarity.

I am nervous about the read-a-thon too. I have read all night long, but not in about 20 years and I haven't stayed up all night for any reason in at least 10. I'm not sure I'm actually capable of doing it but I'm stock-piling easy things, including treasuries of Peanuts cartoons and Winnie the Pooh stories, for the depths of night and exhaustion.

Two is definitely too much for me. I know that this is not very "modern-multi-tasking" efficient, but I am doctor Jim, not a machine! (And who said that reading had to have anything to do with efficiency anyway, huh?)

Usually one. In fact, the only time I read two books simultaneously this year was when I had a PDF copy of an unreleased book on my PC at work and read it in five-minute periods while looking over my shoulder to check that no-one was watching me. Which, as you can imagine, was not fun...