The death-throes of virtue 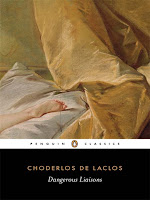 It seems that I'm really pretty much over the stress and horror of grad school generally and my dissertation specifically for I've just read AND enjoyed an epistolary novel. (My dissertation was all about letters, and previous attempts at reading epistolary fiction have inspired hyperventilation and self-loathing.) Woot, I say! The literary world is my figurative oyster again.

Choderlos de Laclos's Dangerous Liaisons was suggested to me by Amateur Reader when I lamented the lack of naughtiness in Abbe Prevost's Manon Lescaut, and Dangerous Liaisons certainly made up for the former's lack of promiscuity and cruelty. Laclos's novel focuses primarily on the Marquise de Merteuil and the Vicomte de Valmont, their complicated relationship with one another, and their diabolical manipulations of their greener companions. There was Sex!, Intrigue!, and Death! and it was a damned good read.

Laclos was rather cagey about whether or not he believed Dangerous Liaisons ought to be an enjoyable read; he seemed clearer, however, that it should be an edifying read:

The usefulness of the work, which will be perhaps even more disputed, seems to me to be easier to establish. It seems to me at least that it is doing a service to society to unveil the strategies used by the immoral to corrupt the moral and I believe these letters will make an effective contribution to this end. (p. 6)

It's hard to know whether or not Laclos really intended this novel to inspire moral contemplation; after all, many other epistolary novelists of the 18th century made similar claims - so often, in fact, that these claims seems rather more calculated to create readerly goodwill, like the humility topos attached to so many works of the Middle Ages and Renaissance, than to actually function as reading instruction. Richardson's Pamela is supposed to be the pinnacle of epistolary moral didacticism, after all, but it's one of the kinkiest novels out there!

The thing about epistolary fiction is that it can make claims to represent reality in a way other, more distant, narrative forms cannot, for letters are meant to reveal the innermost workings of the characters, unfiltered through the lenses of either delicacy or censorship. And indeed, titillation ought to be a primary keyword in any search for Dangerous Liaisons. The Marquise de Merteuil, as sort of adopted older sister to the extremely naive Cecile, describes in a letter to the Vicomte how she "consoles" the 15 year old over one of her various adolescent heartbreaks:

You would not credit how beautiful she is in her grief! I guarantee that if she were trying to be charming she would often be in tears. This time it was not a ploy...At first I was very struck by this new allurement which I had not previously encountered and which I was very glad to observe, and I only offered consolation in a clumsy fashion, which made her feel worse rather than better. And thus I brought her to a point where she really did seem to be suffocating. She was no longer weeping, and for a moment I feared she might have convulsions. I advised her to go to bed and she acquiesced. I took on the role of lady's maid. She had not yet begun to dress and soon her fine hair fell down over her shoulders and bosom, which were entirely uncovered. I kissed her. She let herself go into my arms and her tears once more began to flow effortlessly. My God, how beautiful! Ah, if Magdalene was like that, she must have been much more dangerous as penitent than sinner!

When my grief-stricken beauty was in her bed I set myself to consoling her in good faith. I reassured her first of all on that subject of the convent. I instilled in her the hope of seeing Danceny secretly. 'If only he were here,' I said, sitting on the bed; then elaborating on that theme, I led her by one distraction or another to forget her suffering entirely. (p. 133)

Phew! Hot! Cecile is corrupted and dishevelled fairly easily (and frequently) at the adept hands of the Marquise and the Vicomte, who are using her as a pawn in an elaborate revenge scheme against others who've slighted them. The Vicomte is also responsible for the fall of Madame de Tourvel, a lady whom everyone rightly sees as the epitome of virtue. Madame de Tourvel's seduction is prolonged, cruel, and sexy in a degrading sort of way and titillation is even more so the primary keyword.

However, Laclos ultimately does fulfill his promise of making Dangerous Liaisons into a moral treatise as well as a novel, for the Marquise, the Vicomte, and Madame de Tourvel are all punished in ways that just scream DIVINE JUSTICE. Yet, for all the tidiness surrounding these characters' ends in the book, Cecile's and Danceny's positions (they being the original young, innocent lovers who their elders work so very hard to corrupt) are much more ambiguous. Cecile ends up in a convent but only because she chooses to and it's suggested that her motives are not religious. As well, Danceny, having killed someone (!!), is allowed to go unpunished because he does the delicate thing in making sure everyone's letters end up in the hands of someone who won't use them to cause more scandal. And yet, there's this novel...

This is what I find so fascinating about epistolary fiction - so often the moral work it claims to be intended to do is overwhelmed by the base and rather shabby pleasure it provides in offering a close look into the sordid details of humans rather more interesting and morally complicated than we generally are.
Posted by Bookphilia at 11:01

Have you seen the movie? I just watched it again and IMHO it is John Malkovich's best role--and Glenn Close is pretty amazing as well. I confess, I haven't read the novel, but you make it sound like a lot of fun.

Have you seen the film version with Colin Firth as Valmont (actually, it's called Valmont)? I like that one better than the John Malkovich version because it has more humor in and Valmont comes across as more of an idiot than Malkovich's smarmy version of the character. Also, weirdly, it's much more explicit about the sex in the novel.

The wildest thing is that this novel is a direct descendant of Pamela. de Laclos read Clarissa and thought, what if I just kept all of the good parts? Meaning, you know, the good parts? Richardson would have been horrified. The rest of us can cackle with glee.

Dear god, so much for the random word generator - I have to type in "labia" to comment on my post on Dangerous Liaisons!

Rohan: I have not seen the movie and in fact didn't even know who played the main characters. I will watch it though as I would like to see how it translates to the big screen.

heidenkind: Hmm, I'm skeptical about making Valmont into a silly character. Yet, what else could one do with Colin Firth? I want to have his babies but he's got no edge.

Amateur Reader: And cackle with glee we do. I'm sure Richardson would be horrified, as you suggest, but I can't imagine he wasn't aware of how powerfully sexy Pamela (the book, not the character) was either. (I haven't read Clarissa yet.) As an author, what does do you do when your novel turns out smarter and more interesting than you intended it to be?