Breaking news: I'm almost settled enough into the bookstore and into the new apartment to get back to reading Henry James' short stories. In the meantime, I'm reading some cool books I've discovered in the shop while frantically trying to fill an online order or desperately re-alphabetizing things.

First said short book was The Lais of Marie de France, which I picked up 1) because it was written during the Middle Ages; and 2). I've taught one of Marie's lais, Lanval, and really enjoyed it. Really, what's not to like about sex and the supernatural and chivalry?

Of the 12 lais included in this book, Lanval is in the end still my clear favourite. This may be because of the creepy and ambiguous conclusion but it may also be that I just don't particularly admire the Penguin translation I read.

Lais are poems around the 12th century in France, composed to be sung and accompanied by harp; Marie de France simply took some popular ones of her day and re-wrote them in her own verse and they were very popular. This translation doesn't even try to maintain the verse and so the language often becomes that indistinguishable and forgettable Penguin Classics prose which makes The Iliad sound like The Lais of Marie de France which sounds like Anna Karenina. When I originally read and taught Lanval, it was a verse version and while much was surely lost in translation, it was still more fun than this was.

In the future, I'm going to avoid Penguin for things that aren't reproduced in whatever their original form is. Marie de France was a learned and sexy lady; she deserves better. 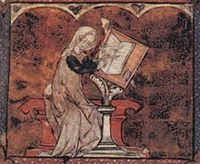 Do you remember the source of the translation you liked? I am interested in reading her.

I remember reading her in college but haven't a clue what I thought at the time. I should look for this - will see if there is a modern French adaptation at the bookstore, that could be interesting as well.

verbivore: I bet French, even modernized, would be even better. :)