I sometimes wish I could be as open-minded about other kinds of books as I am about Japanese literature. At this point in my life, I'll try pretty much anything by a Japanese author, and that is absolutely not true about any other authorial country of origin, genre, time period, etc.

Realistically speaking, however, were I as open-minded about everything else I probably wouldn't get much done and I might miss out on gems like Fumiko Enchi's Masks just because of the sheer busy-ness of it all.

I found Masks in a remainder pile at Book City in the summer, I think (I think this because I believe the book bin was outside). I saw the name, saw it was translated, and bought it. No page 40 test, no corroborating page 1 test, no perusal of the back cover. It was a financial-literary leap of faith.

Friends, there was a net - Masks is a really, really good book. Enchi was clearly influenced by Junichiro Tanizaki at his best (i.e., not Naomi) but her authorial voice was entirely her own too. I loved the way she was able to blur the lines between physical and intellectual obsessions and passions. Many writers see these as antithetical but Enchi really explored the disturbing things that can occur when research into mythology, spirit possession, and Noh theatre get mixed up with physical lust and emotional desire.

And the writing was fantastic. Thank all good things for talented translators. 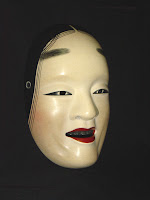 Central to the book's look at the complicated relationships between the widow Yasuko, her mother-in-law Mieko and Yasuko's two suitors Ibuki and Mikame is the ethereal magic of the masks used in Noh drama. The masks are made with static impressions but the way actors position their heads and pose their bodies appear to change the masks' expressions according to the needs of the plays performed.

Mieko is deeply interested in Noh masks and she is both directly and obliquely compared to an actor manipulating a mask to establish certain "dramatic" ends known entirely only to her.

When it was finally revealed what her ends were, I was both incredibly disturbed and somewhat disappointed; I'm not certain how to reconcile such contradictory feelings. But my confusion over the book's conclusion is minor. Masks is an absolutely beautiful book and I recommend it whole-heartedly.
Posted by Bookphilia at 17:13