This book made me cold, so cold 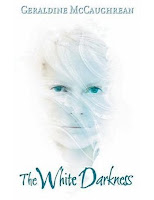 Geraldine McCaughrean's The White Darkness is one of the best YA novels I've ever read. That's a bold statement, I know, but I think McCaughrean's up there with Philip Pullman when it comes to good writing - and Pullman's talent is turned up to 11. What I'm saying is, if you like YA novels, go read The White Darkness now (NOW), in spite of its terrible cover art. Show some love and don't judge a book by its cover.

My friend Shelley, who's a children's lit specialist, recommended this one to me so I jumped on it as soon as I could. I would say I couldn't put it down but at times I had to because it was making me feel so anxious and claustrophobic. Not many books affect me viscerally but when they do it's because the writing is so transcendent that it makes me forget I'm reading.

The White Darkness tells the story of the dangerously naive 14-year old Symone whose best friend is the long dead "Titus" Oates of the Scott expedition to the Antarctic. She talks with him constantly in her head and she's obsessed with The Ice and has read voraciously about it. Her "uncle" Victor is a prize jerk, a fact which everyone but Sym can see, who basically kidnaps her to the Antarctic because...well, I won't tell you. Let's just say, I was continually surprised and disturbed by the plot twists and turns. Also, Sym's relationship with Titus becomes key to her survival and that's all I'll tell you about the plot.

This book made me want to read more about the Scott expedition and I realized when I was done that I already have another fictional account on hand: Beryl Bainbridge's The Birthday Boys. Given my commitment issues, it's not certain when I'll get to Bainbridge but there is some hope on that front: having just blogmented about not being able to commit to a Japanese book to finish The Japanese Literature Challenge, I started reading Fumiko Enchi's Masks AND I'm about halfway through AND I'm really enjoying it. So there's reason to be optimistic in terms of reading commitment. Or, I'm just so contrary that I have to act to prove myself wrong too.
Posted by Bookphilia at 12:13