My brain is still on sabbatical 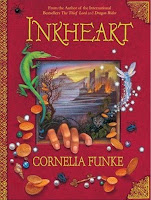 My friend Erin, whom you very recently met on The Reading Lamp, gave me her copy of Cornelia Funke's Inkheart when I met her for dinner in Kingston back in December.

As anyone who knows me well enough to shower me with presents knows, it usually takes me much longer than three weeks to read a gifted book. I'm years behind with my brother Roger's gifties. (Sorry, Roger.) But in the post-defense, extreme burn-out phase I'm currently stuck in, children's lit is exactly what I need. And still all I'm capable of reading, to be honest.

For example, this morning I tried to start reading Yasunari Kawabata's The Sound of the Mountain because it's been a long time since I've read any Japanese lit and because the clock is ticking on the Japanese Literature Challenge I'm participating in; but I had to give up after 20 pages or so because my eyes and brain simply refused to cooperate. I have no idea if the book was good or bad; I am certain, however, that I'm currently suffering from the mental equivalent of lazy eye. It's hard to focus on things that aren't either exciting or very bright and shiny.

Speaking of exciting, bright, and shiny, Inkheart is a rollicking good read, basing as it does an entire 500-page novel on the intrigues and nail-bitings which occur as the result of literally bringing characters to life by reading their stories out loud. I love it when authors literalize metaphors.

(But it's also good that people can't really read characters out of books and into the flesh, not for the villains (as in Inkheart) but because of the murders that would be committed: Jane Austen's gossipy harridans Emma Woodhouse and Mrs. Bennet would both have to die immediately, as would that whiny wanker in Of Human Bondage whose name I can't recall now.)

Inkheart is also an amazing nerd fest dedicated to the arts of book restoration. I love that Funke has the chutzpah to make that central to a YA story - it bespeaks both a confidence and a faith in young readers that is too often sadly lacking. That's it: I'm going have to place Inkheart in that sad category of "THIS SHOULD HAVE BEEN WRITTEN WHEN I WAS STILL A KIDLET, DAMMIT!"
Posted by Bookphilia at 21:03

I've read a lot of praise of Inkheart, so will have to try it.

I have to denfend Emma though.
Gossipy harridan indeed!

you know, i think my little sister's read this. the cover and title are vaguely familiar; i feel like i've seen this book lying around my house. possibly it was checked out of the library on my card.

I love the idea of a story surrounding book restoration, something I have always glamorized in my mind the way CSI glamorizes...well...CSI.

I saw a commercial for the soon-to-be-released movie version the other day, however, and heard nary a word on that particular aspect of the plot.

Either it is not exciting enough for the silver screen, or possibly it will serve as a framing narrative the way that Peter Falk introduces and nudges Princess Bride along...

I've got Inkspell, the next one and I'll pass it on when I'm done. Glad you liked it :)

Sarah: Well, she is a gossipy harridan. I'm not saying I didn't really enjoy the book because Austen is generally incomparable. But I wanted to ring Emma's neck.

Fathima: Are you implying I have reading skills equivalent to your 11-year old sister? Should we take this outside?

Yuri: I would like to see the movie A LOT except for one little problem: Brendan Frasier. Why'd they get a lummox to play someone bookish and intelligent?

Red Cat: Yes! I'll looking forward to that. I saw the third and final installment in Book City the other day but it's in hardcover. Boo.

I liked the second book in the trilogy, Inkspell, much better than Inkheart. But it was still a good read. I haven't read Inkdeath yet, but I look forward to it.