If you're in Montreal and need good reads... 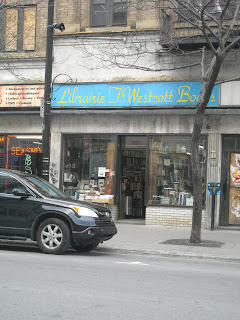 In contrast to my previous post, which was somehow both maudlin and dramatic, I thought I'd better provide some good news re: bookstores; luckily, I still had my photos from Montreal's bookstore awesomeness to share.

I hadn't planned on actively seeking out English bookstores in Montreal but besides not picking up as much in Ottawa as I'd thought I would, I think I finally began accepting, in a holistic and spiritual way, that I'm the kind of scorpion who asks someone to help me cross the river and then I sting them when we're in the middle and we both drown - I can't help it, it's in my nature.

Deepness behind me now, I can move on to pure bookstore appreciation. The first shop we visited was on rue St. Catherine. Westcott Books is your classic dusty, cluttered, old book smell sort of used shop. The owner has his entire inventory in his head, which is something I both fear and admire. It's the kind of place where you can really lose track of time, and not just because of the crazy amounts of books. 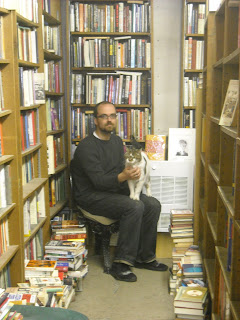 He also has two bookstore cats, Emma (from either Austen or Flaubert) and (T.S.) Eliot, and Eliot decided that while he liked me just fine, he really found my husband to be very much more attractive.

Eliot spent a lot of time rubbing himself all over Brook and the result was that both were happy and Brook ended up with a very furry shirt, just as though he'd been rolling around in an entire pile of long-haired cats just coming down with the mange. It was so bad, actually, that he went to the dollar store and got one of those rolly things just to deal with it.

This is sort of what my bookstore looks like, except for the cute cat business. We do have cats (scads of them, actually) but none are quite nonchalant enough to be bookstore cats. Also, I like to keep the front door open in the spring and summer and they'd die on the road, which is full of people who like to speed and run the stop signs.

I got one book at Westcott Books: Anthony Trollope's Rachel Ray, but I doubt I'll read it. For the same reason I'll never be able to read Janette Turner Hospital's Borderline - the pop culture references the titles makes me think of are much too distracting. 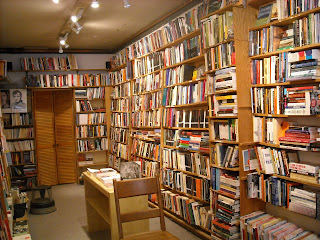 Further along on rue St. Catherine, we found a lovely little (and I mean little) new shop featuring English books - Argo Books. The owner, even younger than self, which is nice to see as older booksellers have frequently lamented to me that no young people are getting into the trade, could curate good literature like a superstar.

I could have purchased his entire literature section just for myself. It was like something from a '70s SF novel in which the bookstore is sentient and adapts to meet the needs and desires of each person who comes in. And says, "I'm sorry, Dave, I'm afraid I can't do that," when you ask for a little Maeve Binchy break from the heavy stuff. 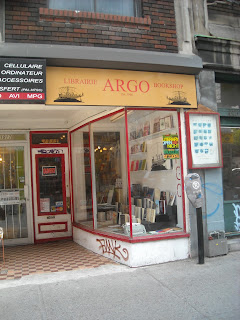 Also he used the space well, as you can see. Apparently, the closing of The Book Room in Halifax (which had been open something like 160 years) made Argo Books the oldest bookstore of new English books in Canada. Or was it eastern Canada? I forget, but it's been open since 1966 and that's significantly older than self, which is also nice to see.

That said, I don't want you to think I feel anything but theoretical pain at the demise of The Book Room. I grew up in Halifax, and I never once purchased a book at that store. It was so dull and predictable. It blamed big box stores for its death but part of the problem must have been its refusal to stock interesting or unique books. As the Book Mark up the street had no such fear, I shopped there, and last I heard, it was still thriving. Before you begin to condemn me for heartless, though, please understand that my theoretical pain is profound. Profound, I tell you!

Now, I really like Westcott and Argo, but I found my Shangri-la of used bookstores in Montreal near McGill University - The Word Bookstore on rue Milton. It's also small, and it also uses its space well, and it also could easily bankrupt me. I had only 10 minutes to browse there but in that time, I found 3 books which were in great shape and incredibly affordable and that I really wanted.

Also, the shop just looked so bookstore-ish; it was hyper-bookstore-ish. Here are two photos: one of the exterior, and one of the interior; you should be able to see the proprietor hiding behind a stack of books in the second. 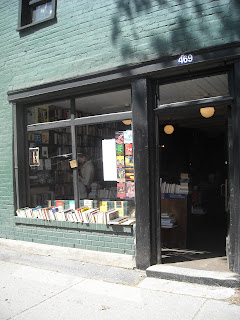 I love that he doesn't even bother to have a sign outside his shop. Besides being hyper-, it's also kind of meta- - it requires no signage. It just is and everyone knows it (it was quite busy while I was there). 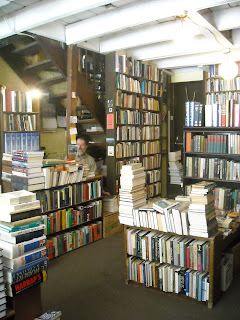 As I mentioned, I got three books here within 10 minutes and here they are, looking stylish on the table of a nearby veg restaurant that served me a curry that was so obviously full of veggies from a freezer bag that I can only laugh...and wonder why people love the place so much (it was also quite busy). 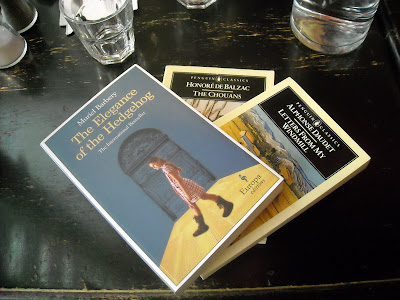 As for French language books stores...friends, they were everywhere. And in abundance. Montreal doesn't seem to be suffering from the same poison that kills used bookshops in Toronto. The man from The Word told me there used to be 17 used shop on Queen St. West in Toronto alone...and now there's one. In my relatively short time here, I've seen 5 or 6 disappear.

Kids, in case you're real dense, the moral of the story is: if you live somewhere that actually has indie and used bookstores, support them. Or burn in hell. Whatever.
Posted by Bookphilia at 18:30

I've only visited Montreal once, but it was beautiful! I'll keep these bookstores in mind as must-visits if I ever go there again.

What a great post! So glad you featured Emma and Eliot and that you enjoyed Montreal :-)