If you're in Nova Scotia and need good reads...

As promised, here is my little homage to the kick-ass used bookstores that make Nova Scotia (well, Halifax and Wolfville, anyway) a seriously dangerous place for my bank account. As I've mentioned before, I bought a lot of books for myself when I was on vacation last week...and there's no shortage of books where I live and work already. It's just very difficult to resist the random finds in shops that I only get to once a year or so. Halifax, my home town, has a fantastic collection of used bookstores, but at the top of my list is Back Pages on Queen Street. 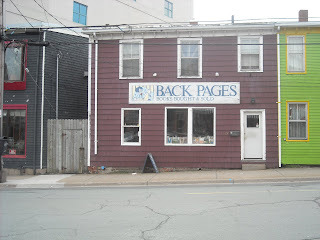 Back Pages is a tiny place, comprising only 3 small rooms, but I always find books I can't resist there. During this visit, what I couldn't resist were some Ellis Peters novels and that Hardy book which I hope I'll read before my next visit to Halifax.

The past 3 or so times I've been in Halifax (so over the past 3 years), I've noted that Back Pages always had the same copy of Gargantua and Pantagruel prominently displayed in the literature section. I always felt tempted to buy it but never did; this time, however, I vowed that if it was still there, I would have to buy it, because clearly it was the subconscious inspiration for my French Literature Reading Project. But alas, or thankfully, it had finally found its way out the door.

My other favourite tiny Halifax used bookstore, which is even tinier than Back Pages as it consists of only one room, is The Last Word on Windsor Street. That this shop has been thriving for at least ten years (run by a former sea captain, yaaaarrrr), is a testament to how kick-ass it is - Windsor Street is kind of a weird place to have a business, and many have tried and failed. It's sort of a major street but it links up primarily with residential streets and is mostly residential itself, at least at The Last Word's end of it. 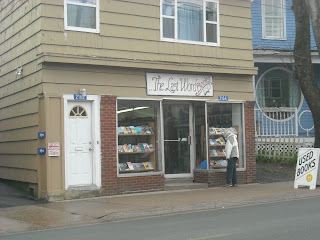 I didn't actually buy anything at The Last Word this time around, but in the past it's been one of my best sources of Japanese literature, and the cap'n and I have spent a lot of time discussing our favourites. I think he might be hiding them behind the counter now, which is fair; in the past, I've forced him to sell me his stash of Japanese novels, which made him look quite demoralized and downtrodden. This time around I didn't have the heart to do it; also, my suitcase was already getting pretty full.

Right on Barrington Street, which used to be the heart of downtown, and then died, and which now appears to be reviving itself somewhat, is the gargantuan J.W. Doull's Books. The ceilings are 20 feet high and the bookshelves the same, the stacks on the floor are 3 feet high, and the space itself is about 3 times the size of my bookstore - and we have about 35,000 books in stock. Yes, Doull's can be a little overwhelming. 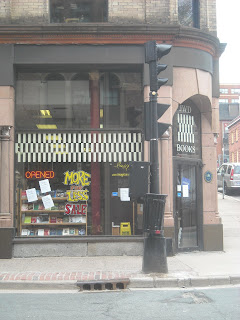 But in a place this size that hasn't given in to the selling remaindered bestsellers racket/cop-out, the treasures to be discovered are endless. This is where I got my new Gaetan Soucy novel (yay!), as well as some later Ellis Peters, Diary of a Nobody, and My Cousin Rachel. I could have bought a lot more, especially because they had a big sale going on but I had to show a little bit of restraint...because I was worried Porter Airlines would tell me I couldn't check my baggage on the trip back because it was too heavy. Also, I was shocked to discover that they didn't currently have any Wodehouse in stock, which I likely wouldn't have been able to resist either.

My friend Yuri and I took a road trip when I was down east and we ended up in Wolfville, where he took me to a great used bookstore called The Odd Book. It's not located on the main street but it seems to do well enough anyway. 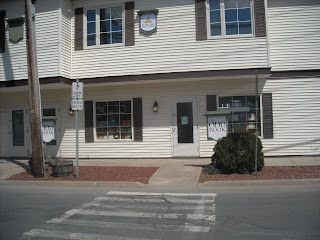 It's also not at all pretty on the outside, and the lighting inside is rather too bright for my tastes (I like used bookstores with dark corners and an abundance of dust), but the selection was great - this is where I got The Vinland Sagas, which I'd never even heard of. Presenting previously unknown reading gems is, to me, one of the most important functions of used bookstores.

It may seem as though all I did in Halifax was go book shopping, and that's almost true. But I also ate and so that you don't think that my book addiction is endangering my health, here's proof that I sometimes put down the book to feed the machine: 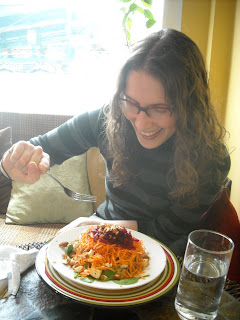 Okay, so you just told me about bookstores that I don't even know about! That's probably not a good thing. lol

If you ever road trip down to the Valley area again, there is also a great second hand bookstore in Coldbrook.

I find J.W. Doull's Books hard on my head at times. I am sure every time I walk in there I walk out overlooking something I really want, but it is just so big! So big that it is actually two stores now. I haven't been to the second one yet, though.

Did you miss Dust Jacket Books in the basement of Maritime Centre? It is (I believe) run by a former member of the air force (tally ho!), and dances a line between organized/disorganized that you seem to delight in.

It was great having you here!

Kailana: I grew up in NS, and I've never even heard of Coldbrook! But I'll try to remember to take a drive there the next time I'm down east.

I haven't been to Doull's second store either. And yes, it's definitely hard on the head (and neck, when looking at the books 7 shelves up).