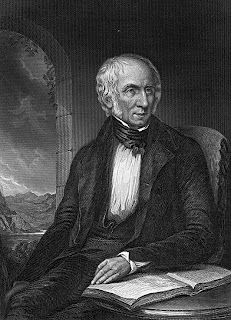 William Wordsworth (1770-1850) was one of the Romantic movement’s most important figures. He produced an astonishing body of poetic work and with Samuel Taylor Coleridge, established the terms and ideals by which the literary art of their time was defined (see Preface to Lyrical Ballads).

Bookphilia: Today, I am joined by William Wordsworth, Romantic numero uno and no friend of mine.

William Wordsworth: Well, I don’t like you much, either. You dragged me away from a really good episode of Survivor 437: Kim Kardashian’s Cousin’s Guest Bedroom!

B: Good lord, what is such a widely respected artist like yourself doing watching such mush??

WW: Reality television is the new Romantic poetry; it’s all about orchestrating emotional explosions everywhere, regardless of how inappropriate the context.

B: I see…but the stars of such shows aren’t always as…articulate as yourself.

WW: Well, that’s true. They are, generally, a bunch of ass-licking mouth-breathers, but the world has declined a great deal since I last wandered lonely as a cloud, so we must make due. Also, there’s nothing else on.

B: Why not skip TV altogether and do some more writing? If Shakespeare can still manage to write new plays then surely you can write some new poetry…?

WW: Well, I would. I REALLY would, but you know…the world can’t handle me anymore. Looks nervous, shifty eyes

B: Is that really why you’re not writing?

WW: No…Weeps inconsolably for a few minutes. My sister, Dorothy, won’t give me back my ink and quills unless I promise to write an epic pastoral gothic nightmare about an earthly goddess named Dorothea walking 20 miles out of her way to avoid crossing the paths of cows who stare horribly while munching hay in large fields.

B: Er….Well, that is a rather ridiculous topic…but maybe she has a point underneath it all…

B: Well, your poems are all so…self-involved. Maybe it’s time to branch out a little?

WW: Bitch, it is all about me. And cows have nothing to do with me. I’m William Wordsworth, for God’s sake. The only topic important enough for me to write about is William Wordsworth! Now, let me say something else even deeper and more awesome than what I just said, for I feel some blank verse coming on-

B: Why are you talking this way?

B: Like a low rent trailer park denizen with more attitude than smarts?

WW: You’re the medium; I speak the way you think. How I say the absolutely unstoppable and crushingly deep shit that comes to me now reflects your pathetic little pea of a brain-brain.

B: Right then, let’s talk about your sister Dorothy.

B: I insist. While I think I don’t like your wanky poetry, I can see now that I probably haven’t read enough of it to be able to form a real, informed opinion on it. You see, I managed to sneak through uni without taking a course devoted to the canonical Romantic writers; in fact, my only Romantics class was about Romantic women writers, one of whom was your sister, Dorothy. We read her diaries, and they were as lame as a one-legged duck on broken stilts. EXCEPT, except, for the funny bits in which she describes walking 20 miles out of her way to avoid cows who stared horribly - and, of course, the incestuous bits.

B: I think so too! That’s why we should talk about it. Class discussion just wasn’t allowed to go there, so it’s high time you cleared things up for me. You know when you got married and Dorothy insisted on wearing your wife’s wedding ring and sitting between the two of you? Did you reciprocate D’s unspeakable desires?

WW: Weeps again. Of course not! Who could love a woman fearful of such gentle, simple, natural, spiritual, earthy beasts as cows? She’s a monster, I tell you. She even tried, on my honeymoon with my wife, to-

Dorothy Wordsworth: William, really. This chit won’t understand. Ours was a love that transcended the gross semi-intellect of people not possessing the last name “Wordsworth”. Or perhaps Coleridge.

DW: Oh, but my dear Will, there is no feeling more given to spontaneous overflow than our love, during which time each minute becomes sweeter than before-

WW: Rolls up in a ball, and begins rocking back and forth.

DW: Love, I will frame the measure of our souls and they shall be turned to hot brother-sister love! Why do you insist on provoking me with your resistance? Dorothy grows larger and more fiendish-looking as she speaks.

DW: I defy thee, thou nameless wretch! You too will submit-

B: Shoots lasers out of eyes and kills Dorothy Wordsworth.

WW: Momentarily speechless. Oh thank you! Everything is forgiven. Well, mostly. Really, how can you not like my poetry? It really is unsurpassingly brilliant.

B: Maybe I haven’t been fair to you. Had I known your incredibly dull sister was actually a succubus with big scary teeth, a surprisingly large vocabulary, and a taste for fan girl pornography, I wouldn’t have been so hard on you.

B: And all was peaceful again in the literary universe.

Dammit! I will never think of DW again without the phrase, "incestuous cow-hater".

OH THANK GOD. That biyotch needed a smack down (although I do agree that cows can be pretty creepy sometimes).

I used to think I hated the Romantics, but then I realized that I really liked Keats and sort of liked Shelley and loved The Rime of the Ancient Mariner, so...

WW: So you're saying it was just me you hated?

YS: Why would you think of D as anything BUT an incestuous cow-hater?

heidenkind: Cows are not creepy. Or if they are, we deserve it.

Wow, I am stunned. I had no idea. I always thought DW was a supressed artistic genius and WW was the evil life sucker. Who knew? Thanks for the giggles :)