I got barely any reading done this weekend because I was busy preparing to hold my first large-ish social event in about three years. While we were in the bookshop, we had no time to entertain and besides, our apartment was a hellish bit of hell on earth and we were too embarrassed to have friends over.

Yes, we had a party and do you know what kind of party it was? It was a PIE-LUCK. Yes, like a potluck but ONLY pies. There was a pretty even mix of sweet and savoury offerings, and all of them were ridiculously kick-ass. This may be the best idea I've ever had in my life; I'm not really kidding.

I made chocolate pumpkin pie (filling recipe courtesy of Dreena Burton and flaky crust recipe courtesy of Colleen Patrick-Goudreau), which you can see in the photo below - it's the one with PIE LUCK written on it in Dreena's appropriately named Celestial Cream. There was also blueberry pie, chocolate peanut butter banana pie, bourbon pecan pie, S'Mores pie, curried cilantro granola pie, pot pie with mushrooms and leeks and cracked pepper biscuits on top, quiche, frozen peanut butter pie with raspberry coulis, Boston cream pie cupcakes - just to name a few. In the end, there were more than 10 pies going. This will definitely be an annual event with us! 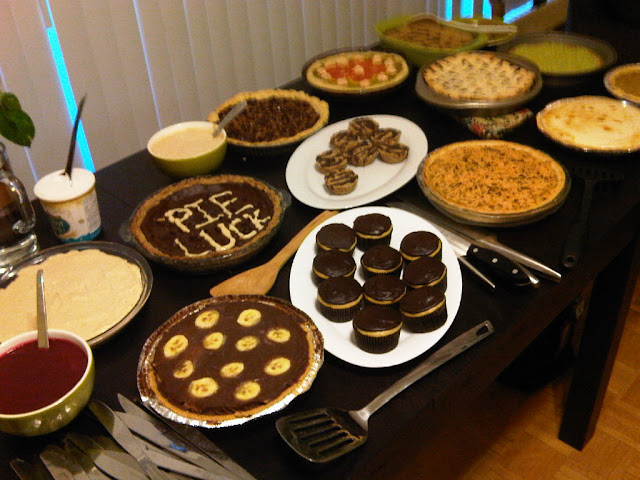 Tomorrow, I'll be back to the books with a slightly larger belly. :)
In the meantime, the results of my first reading poll is in - after I finish Ngaio Marsh's Grave Mistake, I'll be reading China Mieville's The City & The City. Tell me how you feel about deciding my reads for me in the comments!
Posted by Bookphilia at 23:05

That is a brilliant idea Colleen! Is your chocolate pumpkin pie vegan? If so, can I have the recipe? :)

The pie recipe is from Dreena Burton's Eat, Drink, and Be Vegan. If you don't have this book let me know, and I'll email you the recipe.

How I feel about deciding your reads for you is the least applicable bullet point of this post. So! Many! Pies! If I ever moved easterly, I will come to your pie-luck and bring my caramel-apple pie. Prepare to die.

You are a genius! What a fabulous idea.

Oh raych: I really hope you move east. I think caramel apple pie would be a great way to go.

heidenkind: That was the consensus!

J.G.: Thank you. I never would have believed it of myself before this. ;)

Wow - what a spread! I'll be you had a fabulous party. I am very interested indeed in what you think of China Mieville. I have that book to read and so nearly picked it up just before Christmas. A review is exactly what I need to move it up the tbr pile.

Great idea ... the Pie Luck I mean. Looks like a wonderful tradition.

As for choosing your books - I think I'll sit on the fence for that one and see what happens.

litlove and whispering gums: The City & The City (and by extension the poll that determined that I would read it when I did) was a success - I really, really liked it!