The term to which this blog title refers is "buffle-headed" and that's how I feel right now. Or how I think I feel right now. I haven't looked up this glorious adjective in the dictionary to see if I'm understanding Osborne rightly but I just like the sound of it; I feel it reflects how I'm feeling.

I am currently on some serious painkillers and other drugs that are making me stupid and dizzy. I am writing this blog post as an experiment: to wit, if I can write a fairly lucid post now without insane amounts of effort, I will try to get back to my thesis conclusion this afternoon. I had to abandon my conclusion on Wednesday morning in favour of a trip to the emergency room and large doses of pain-managing narcotics. Yes, I'm going to be okay even if I'm not really right now. So, let's see how this goes, shall we?

The following books are all ones that I've read in 20 minutes or less while browsing happily in bookstores. Because all were perused in such short periods of time, I don't feel like I can fairly count them towards my year-end total, but they're all interesting and/or irresistibly charming and therefore deserve mention. 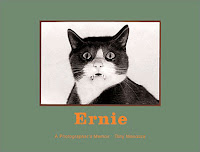 Ernie by Tony Mendoza. I've actually "read" this one a number of times which, while filled with boring and forgettable text, contains some of the most amazing photographs of cats I've ever seen. They're so amazing because they reveal how utterly manic, evil, and uncute cats can be.

The photos are all black and white and were taken in the late 70s, I think, and so the titular subject is by now long gone and presumably wandering about in cat heaven biting ankles, wrists, and faces. 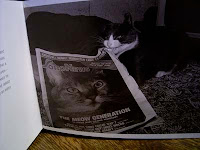 I found this amazing book in Pages at Queen and John where one of the booksellers informed me that Ernie is actually a best-seller there. (Indeed, I've given this book to Vee, the subject of my most recent Reading Lamp post.)

It's perfect for those of us who love cats but not the cutsie renditions of cats we all too frequently receive in the forms of birthday cards, calendars, chain emails, and gawd forbid, t-shirts.

The Gas We Pass by Shinta Cho. Improbably as all get out, I found this book being aggressively displayed in the window of an upscale children's toy shop in snobilicious Yorkville several months ago. The incongruity of a fart book for kids being displayed in the land of "shit that smells like roses" was matched for me only by the fact that someone took the time to translate this Japanese book into English!!! 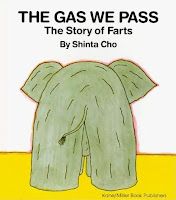 I bought it for a friend who appreciated it, or at least did an excellent job of pretending to. It doesn't matter; I enjoyed it immensely and showed it to many people before passing it along as a gift.

The Gas We Pass is a really strange combination of veggie propaganda (it claims that people who eat meat have stinky farts while those who eat veg food don't - ha!), an anatomy lesson with (given the projected age group for the book) pretty complicated drawings and explanations of the GI tract, and, of course, fart jokes.

Genius, I say. If I'd received this book as a child I'm sure it would have been a total giggle-fest plus a major incentive to become a vegetarian doctor.

Varmints by Helen Ward and Marc Craste (illustrator). I don't have kids or nieces or nephews to buy awesome kids' books for but if I did, every single one of them would own a copy of Varmints (and not just because "varmints" is a wicked cool word, although that, admittedly, counts for a lot). 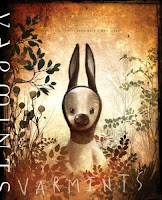 Varmints is a beautifully illustrated and sparcely worded look at how the beautiful sounds of the pastoral world inhabited by buzzy bees and the like are being drowned out and more disturbingly and permanently silenced by increasing urban- and suburbanization of the wild and farmlands.

A call for über-early environmentalism, I fear the message in Varmints will be lost on kids and their SUV-driving parents. I'm just cynical like that.

And at the complete opposite end of the spectrum is Mütter Museum: Historic Medical Photographs, put out by The College of Physicians of Philadelphia. This book should be shown only to children to whom you want to give nightmares or children whom you wish to mold into serial killers who collect body parts in jars.

This book, which was 99% photographic, features a bunch of late 19th- and early 20th-century photographs of the most horrifying medical oddities that you can imagine. I have a pretty strong stomach and so wasn't bothered by hair lips, elephantitis, truncated limbs, limbs in the wrong spots, or even most of the Siamese twins. Except for one picture. Oh. My. God. 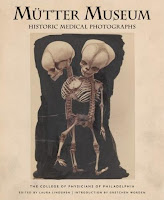 In the series of photos of Siamese twins there was one featuring a set of twins (deceased, of course) who were attached by their faces. Which means they didn't have faces. Where each twin should have had a face, the other twin's head was growing out of that space. So there were two sets of perfectly formed ears...and nothing in between.

All it took for me to turn pale with sudden nausea was this thought: "How would someone react, in the late 1800s, to giving birth to babies like this?" I imagine it would be pretty hard not to go completely insane and end up like Rochester's first wife.

Zero Mostel Reads a Book by Robert Frank. Another book of photographs, although completely sans any explanation (as I recall anyway), is this solid gold book by Robert Frank, famous for his less than enthused look at US society in The Americans.

This volume comprises a series (although unconnected) of photographs of late comic actor Zero Mostel reading books and displaying all the emotions associated with a good read, but turned up to way past 11.

Mostel's looks of fear, anger, disgust, and joy are so ridiculously compelling that I went through the book about 3 times before hubby told me it was time to leave (we were in Pages again - this store has the best weird book finds ever!).

Here's a photo from the book that I found on that series of tubes known as the interwebs; unfortunately, I couldn't find any of the more dramatic ones.

As you can see, I like books in a variety of genres and you can be sure that if I were made of more money I wouldn't hesitate to buy every single thing I like, regardless of it taking me less than 20 minutes to read.

Vaguely related: I just did a quiz on BookBrowse that confirms what kind of reader I am, i.e., an "All-Rounder":

"Your responses showed you fitting equally into all four reading personalities:

Involved Reader: You don't just love to read books, you love to read about books. For you, half the fun of reading is the thrill of the chase - discovering new books and authors, and discussing your finds with others.

Exacting Reader: You love books but you rarely have as much time to read as you'd like - so you're very particular about the books you choose.

Serial Reader: Once you discover a favorite writer you tend to stick with him/her through thick and thin.

Eclectic Reader: You read for entertainment but also to expand your mind. You're open to new ideas and new writers, and are not wedded to a particular genre or limited range of authors."

You can find the quiz here, if you have approximately 5 minutes to spare.

PS-Since it's taken me over 2 hours to complete this post, the writing of which was interspersed with the frequent need to lie down, I'm going to hope that tomorrow will be the magical day of the return to my thesis conclusion.
Posted by Bookphilia at 12:42

Haha...Tony Mendoza, haven't heard that name in while. I last recall him in an old issue of "American Photographer" in the mid 80's when they published a collection of photos of his. The outrage prompted by this one particular photo was memorable.

something to remember when they come after you to pay back the student loans. "Really, I'm an art-photographer now, I CAN'T pay!"

Thanks for the heads up on the Robert Frank book. I'm a big fan of his work who hasn't heard of that one!

According to the test, I'm a "Serial Reader"!

Thanks for the link, Wayne. Here are some of the Ernie photos, from the same site.

I love Ernie--now I'm going to have to hunt down some of these others. Thanks as always for making my book-selection process easier!

Oh, and I couldn't even make it through the quiz. I'm an involved, exacting, serial, and eclectic reader. I don't take these to be mutually-exclusive.

i don't know...i don't think one needs to be exacting to be serial, eclectic, and involved. I know someone who will read anything devotedly - and I mean anything, including old business textbooks from the 80s if that's all there is to read!