Damn, fellow babies, I'm soooo tired. I'm really nearing the end of my thesis and as the light at the end of the tunnel comes to seem rather more real than hallucinatory (or mortal) I'm noticing just how deeply exhausted I am. I've finished reading for my conclusion and will begin the organizing and hopefully writing tomorrow. Also, I hope I can sleep tonight. I was up half the night last night with my mind doing a river dance (I know, embarrassing - why can't my sleepless mind be a fly hip hop dancer?).

So, here I am doing another 2-for-1 post. I really believe these will end soon and here's why: I'm going to be reading Victorian novels like mad when this is all over! Dear Dickens: I'm going to make it up to you for neglecting you so long. Sweet Balzac: I really want to get to know you; I think you have a beautiful mind. Sexy Collins: I know you're shallow and naughty but I love you for it. Lovely Eliot: It'll be so good to see you again! 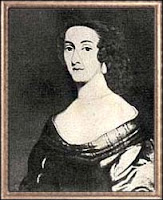 Not that reading times have been bad lately. A few days ago, I finished Dorothy Osborne: Letters to Sir William Temple as edited by Kenneth Parker. Written between 1652 and 1654, these are some of the best letters ever written. Indeed, Osborne (who was not nearly as pretty as Temple - I'm giving you their portraits instead of the book cover), wooed this hotpants young Sir with her letters alone and if you've read them, you know why.

Dorothy Osborne could turn a phrase like the sexiest libertine could turn a well-shaped ankle and tiny foot encased in sexy boots. She could drop wit and knowledge like a pretty but predictably coquettish lady could drop a handkerchief at just the right time. If someone had ever written me letters like this I would have married them too, no question. 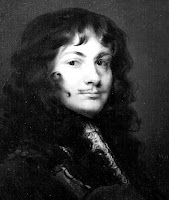 But yes, a turning point has been reached: this is the last book I'll ever read for my thesis. Well, for the writing of it anyway. I don't know what's involved in preparing for the defense but I can't think about that too much right now because then someone will have to unlace me and revive me with their smelling salts.

That said, I want for a moment to get back to what I'm going to read when this is all over. Yes, I'll be reading some insanely long Victorian novels and I can't wait. But I also envision a day when I can go back to reading Renaissance plays and romances just for fun, completely sans the emotional baggage I've collected in my time PhDing. Therapy may be required first, however: Vic Lit therapy, with some passionate and depressed Russians thrown in for good measure.

I also recently stormed my way through Yousef Al-Mohaimeed's Wolves of the Crescent Moon, which I found quite by accident in yet another late night used bookstore crawl. I am only somewhat ashamed to admit that I picked this one up entirely because of its pretty cover.

This book has been banned in Saudi Arabia, where the author is from, and it's been compared to the works of Gabriel Garcia Marquez. No, it doesn't seem as though the former is the result of the latter.

I don't think I know enough (i.e., anything) about Saudi Arabia to be able to speculate on why this book was banned and the back cover copy doesn't say why. Speaking of back cover copy, I don't believe, either, that comparing Al-Mohaimeed's writing to Marquez's is either fair or very accurate.

Al-Mohaimeed's writing seemed pretty unique and all his own to me; I suspect that comparing him to the well-known Marquez was a marketing ploy designed to draw in western readers, which I kind of understand. But I hate the way new or unknown writers end up being portrayed as derivative imitators of those that are well-established and have been deemed great by the arbiters of taste and distributors of large cash prizes for literature.

This sort of comparison may only be a marketing ploy; it may even be a successful one (but not with me - I did my usual page 40 test!). But I also have to wonder if such comparisons are the result of copy-writers simply running out of steam. In which case, I say we ban back cover copy right out, and not just because of the derivative/comparative impulse.

Back cover copy is too often written by the dangerous and irresponsible who, getting caught up in the summarizing skills they honed in grade 11 English class, forget themselves and reveal the entire plot on the back of the book!!!

Hissss! Just last night, I found a copy of George Elliot Clarke's Beatrice Chancy in my office and foolishly read the back cover copy. Before I knew it, 4 short sentences had given me the entire plot including the horrifying climax!! And this looks like a work that would have benefited from the reader being shocked and surprised. Curse you, you dirty bastard copy writer - may your hell include the revelation of all plots of every book you want to read!!

But back to Wolves of the Crescent Moon. I think this book was unique and in many ways compelling but I just feel like it didn't quite get there - "there" being wherever Al-Mohaimeed was trying to take it, and I'm not sure where that might be. However, as a first novel it's really good and I suspect he'll just get better and better. This book brings a whole world of pain though so don't read it if it's the only thing available when you're really trying to find some Wodehouse.
Posted by Bookphilia at 20:18

Congratulations on finishing that last book for the writing of your thesis! That's wonderful. Must feel so liberating (okay, and probably exhausting too).


Just think of all the unrelated reading out there waiting for you - very exciting!

Thanks, verbivore! I'm trying to keep my eye on the long Victorian prizes!