I was flipping channels sometime this afternoon and lamenting the lack of good things on TV (as I am not a fan of either soap operas or daytime talk shows) when I happened upon THE GREATEST CHILDREN'S TELEVISION PROGRAM EVER MADE.

No, it was not a classic like The Flintstones or Sesame Street, although the latter was pretty solid gold a lot of the time, at least when I was a sprog. No, this is a new show and I wish for two things: 1) that this show had been on when I was a kid and 2) that I could be one of its writers now. 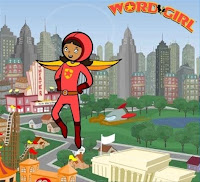 In case you haven't heard, THE GREATEST CHILDREN'S TELEVISION PROGRAM EVER MADE is a PBS effort called WordGirl. It's about a 10 year old girl from the planet Lexicon who is stranded on Earth after her space ship crash lands.

Like all come-from-away super heroes, WordGirl has a human alter ego (in this case Becky) which allows her to fight evil in relative obscurity. WordGirl's main super power is her superior vocabulary.

The show is for 6-8 year olds and is designed to help them develop their vocabularies (because it assumes sprogs aren't dumb and aren't afraid of big new words, like "gloating" and "idolize" and "cumbersome"). And I can only assume that vocabulary development for youngins is desperately needed after they've spent too many years watching Teletubbies. (I think Teletubbies was some kind of conspiracy to send western civilization back to the sub-sub-basement of the Dark Ages by teaching kids that mumbling a lot and saying things like "Teletubbies go bye bye" make for good communication style.)

The episode of WordGirl I so fortuitously stumbled upon today featured the villain Dr. Two-Brains and his vocabulary-challenged stand-in Glen; it also featured WordGirl/Becky trying to get her hands on sufficient amounts of book-binding glue for her science fair project (oh the glorious nerdiness of it all!).

Dr. Two-Brains isn't the only villain WordGirl has to out-word, oh no; there's also Granny May, The Butcher, and Chuck the Evil Sandwich Making Guy. I don't know what agendas these evil-doers have but I suspect I'm going to find out.

If this show had been on when I was a kid, I would have been WordGirl for Halloween every year and maybe I wouldn't have gotten smacked down for reading books so much. Or maybe I would have been smacked down even more, but at least I could have imagined myself as a crime-fighting linguist (as opposed to a cunning linguist) just using my crossed eyes and thick glasses and ugly pants as cover for my true super hero identity. Ah well. At least there's hope for the sprogs of the 21st century...
Posted by Bookphilia at 21:24

I have totally watched this show!
The villan was "the butcher" or something and his power was shooting pepperoni from his hands.. but he went to a vegetarian restaurant and all the mellow-hippies were like "dude ... I love tofu... ohhh those yummy bean curds" in a slow stoner voice... I was a little peeved about the stereotyping.... but it was still cool that word girl knew what vegetarians are and explained it sensibly to the butcher

My daughter loves this show too!

Angela: At least the Butcher is a villain and not a super hero.

Rohan: Excellent! I always worry that I'm one of three people in the world watching PBS programs...