Aha! So, I had occasion yesterday to take the subway during rush hour and was given the opportunity to behave like a creep and gain several book-reading sightings. Curious/Creepy is down but not entirely out, friends, so give it the love it deserves. All these books were being read between 4:30 and 5pm on the northbound Yonge line. (For all you non-Torontonians, this may be translated as "exceedingly f***ing crowded".)

Filthy Lucre by Joseph Heath. I don't know this book at all, but I commend both its title and its cover. Especially the cover, which makes me think of a crazy and amazing novel co-written by George Orwell and P.G. Wodehouse. You know you want to read that book too.

In fact, Filthy Lucre is non-fiction, and is all about helping people gain even an iota of real knowledge about how economic systems work. This is one of those "I feel like I should read this but I can't because it's not a novel, which yes, I know, makes me a lazy git" kind of things. I'm not going to read this. Unless the author, who teaches at the University of Toronto, emails me and tells me why I should, even though I'm allergic to non-fiction. Yes, Dr. Heath, that's a challenge from Dr. Shea, who like you, can't do anything about medical emergencies on aeroplanes but went to school for a horribly long time.

Shopaholic and Baby by Sophie Kinsella. If the person reading this schlock had also been a dirty hippy, I might possibly have become too happy to live. Alas, she was very sleek and expensively dressed and I laughed in my black, black heart at her for lo, she was still riding public transit with the rest of us grubby poor folk.

I know I'm a snob and close-minded - also, I hate shopping, even when I'm flush with cash - but how could shopping as a central trope possibly make for interesting fiction? I just feel as though the popularity of Sophie Kinsella's books must herald the end of days complete with the full locusts, plagues, and horsemen bundle.

American Wife by Curtis Sittenfeld. I'm much more allergic to books that look like this than I am to non-fiction, Dr. Heath, so don't give up before you even try. Even though American Wife looks like a 1950s how-to book for newly married young women with no clear idea what to do after being instructed to shut their eyes and think of England (er, in this case, Abraham Lincoln's eyebrows), it's actually a novel. And according to the Amazon dot see-ay, not a very enjoyable one.

Well, duh. But seriously, I think there was a movie made out of this "Now my husband's the president, look how beautiful and well-coifed my life is!" starring Annette Bening long before Curtis decided she (yes, she) should blow the book world apart with this novel. Having seen the time-travelling film adaption of this one (plus the cover), I think I won't pick this one up for my own TBR pile. Unless TBR stands for To Be Rended.

Eclipse by Stephanie Meyer. This is book number something or other in the immensely popular Twilight series, which I also will not be reading. Why, you ask? I am generally rather surly and resistant when confronted with things that are this popular but that's not actually why. I like me a good vampire story and so wouldn't say no if the Twilight books were good. But I did a few page 40 tests and oy vey! the Meyer makes Jasper Fforde look like a ffacking genius! The writing is too much of the shit.

Indeed, a friend of mine who lurves the vampire books like no one else, told me she read the Twilight series but tried to hide them when she was perusing them in public because they embarrassed her. I think the young lady I saw reading Eclipse yesterday may have felt the same, for it took me a lot of creepy doing to find out what she had in hand. The dust jacket was at home and her hand was placed protectively over the spine; only by staring intently at her did I find out what the book was, when she briefly shifted positions to let someone sit down next to her. (No, not me! I'm not that creepy...yet.)

The Book of Negroes by Lawrence Hill. People come into my bookstore approximately every 3 days asking for this one and I never have it. This book is so popular that the only thing it now requires to be declared a saint by the Vatican is to be chosen for Oprah's book club.

No, I haven't read this one either and am not like to. I am curious and the fact that it's received mixed reviews (the less than positive ones coming from people who aren't afraid of being tarred and feathered) make me more inclined towards it. BUT I won't read it ever, because I can't. I simply can't because I recently learned that Lawrence Hill is the brother of Dan Hill, who used to sing excruciatingly terrible love songs in the 1980s (or was it the early 90s?). When I see The Book of Negroes, I get an awful earworm that begins with the plaintive lyrics

This is how committed I am to my art, my blog art, let's call it my blart - I knew I'd get this wretched ditty in my head if I wrote out the opening lyrics for you but I had to, so you'd know why I can't read Dan's brother's novel. 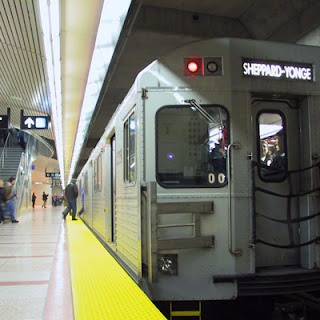 Friends, I don't know when I'll have the opportunity to take transit at a busy and flustered time of day again, so it might well be another 6 months before I skirt the line between merely curious and disturbingly creepy but when I do...prepare for some more abuse being heaped upon books you may well adore. Until then, peace, love, and happiness.
Posted by Bookphilia at 15:34

I love these the most.

But that one moment in time has stereotyped them for ever. What if the reader of the vampire book had actually just finished 'Ulysses' and was merely limbering up before taking on 'War and Peace'?

Yeah, OK, not very likely, but you get my point...

raych: thank you. I don't love them the most but I do enjoy them.

Tony: I posted your comment about that other Curious/Creepy. Are you giving me shit? I don't think I mind if you are, but it's hard to get tone of voice here.

I was blog-hopping today and got here from Books I Done Read. This blog is hilarious. Thanks for sharing!

The page 40 test: instead of reading page 1 of a book to decide whether or not to read it, read page 40. By page 40, authors have either hit their stride or fizzled out. It's only failed me once (Our Father, Andre O'Hagan - shudder).

Definitely not an attack on you at all :) I've just finished my number 50 for the year, which was Nick Hornby's collection of reviews for 'Believer' magazine ('The Complete Polysyllabic Spree'), and both his book and the various blogs and Facebook groups I frequent have me musing about how nice you should be and how bitchy you can be when reviewing books (and when I say 'you', I am, of course, talking about people in general). This is getting pretty long for a blog comment though...

Tony, I don't think bitchiness is ever ok in reviews, specially not when one writer is discussing another writer’s work. i think a personal opinion is all a review should ever purport to be - because that's all it ever can be.( Saying that, Colleen is unfailingly amusing and I love reading her reviews!!)

Colleen, I just did the page 40 test on The Princess Bride, The Gargoyle and The Man In The Iron Mask - thanks for that! I've ended up with some stinkers based on page one!!