If you're in Parry Sound and need good reads...

I have a fair bit of catching up to do so this post is going to be crammed full and displaying all the characteristics of a split personality. Besides telling you about bookstore heaven and hell in Parry Sound, ON, I need to briefly discuss a few books I've recently read...and one which I've abandoned.

Last weekend, I went up north for some sweet cottage r&r. Parry Sound (pop. approx. 6000) has two bookstores (that I saw anyway). One is awesome and one terrifies me. The good news first. 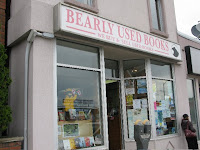 Bearly Used Books is on the main street (of which I can't currently remember the name) and it is just what you'd expect and hope a small town used bookstore to be: low prices and a lot of fiction. For my tastes, it didn't have nearly enough literature but I did pick up a few Ellis Peters books there. Also, the owner was super nice and the place was packed.

My friend Jason, who I was with, bought a Grisham novel and I laughed at him a lot. But he repaid me at the end of the weekend by laughing at me for reading at a normal human pace, when he'd expected me to read 39 books in my brief stay at cottage heaven central. What can I say? Sometimes deck chairs can be too comfortable, and spontaneous napping is both required and irresistible. 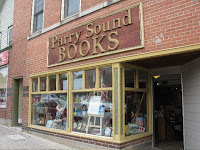 Parry Sound Books is the town's purveyor of new books and I didn't like it. It's not that it didn't have some books that I would read, it's that it felt like the Stepford wife of bookstores. It felt very sterile and controlled, like a hotel gift shop (and I would know, having had the misfortune of working in one.)

While working at said shitty job (it was in Halifax), I read a book on sale there that I can't recall the name of. It was about press gangs in Halifax and in it there was a description of someone being flogged which made me nauseous and pale. The boss thought that would be bad for business and so ordered that employees could no longer read the books on sale there. You will be terribly surprised to hear that I quit that job completely sans notice and guilt.

Anyway, about Parry Sound Books. It had a great location and pretty good decor but the atmosphere was icky because it was so obviously geared towards the cottage/tourist crowd and everywhere there were cheap do-hickies that kids of tourists like. I'm sure if I lived in Parry Sound, I'd just learn to love the place, but as one of the tourists it was ostensibly geared towards, I wanted to run away crying.

Luckily, Parry Sound also has a really nice library, which is surprisingly big given the number of people who actually live there. And the coolest thing about the Parry Sound Public Library is that the kids' section has a gigantic boat right in the middle of it, a boat filled with books. Yaaar, that be my kind of boat! (I was trying to look terrified and on the verge of shipwreck in this photo but by the time Angela snapped the shutter, I just looked really drunk. Le sigh.)

The other place to buy books in the Parry Sound vicinity is to go to the eleventy thousand yard sales that take place every single Saturday. We went to all of them and I got a cartload of goodies for the bookstore and a few for myself. We did so much driving that day between yard sale events that I managed to read the entirety of the incredibly lengthy and dense Esio Trot, by Roald Dahl.

Esio Trot's a particularly strange one, I think. It's got the usual pleasing Dahl whimsy but it's about a guy who tricks his neighbour into marrying him by kidnapping her turtle and replacing it with increasingly larger turtles, all after he gives her a made up magical spell to help him grow. Er, what? This is creepy on several levels. Perhaps it's a big seller at Parry Sound Books, eh?

I also began a silly vampire book on the bus up to the cottage and finished it at the cottage: part two in Barb & J.C. Hendee's Noble Dead saga, Thief of Lives. As you may recall, I read the first book, Dhampir, at a rather low mental point but it was enjoyable so I figured I'd keep going with the series.

Thief of Lives was good but not as compelling as Dhampir. But maybe Dhampir wasn't good and I was just much more desperately in need of escape when I read that one? I don't know. I was irked by certain plot choices in this one. I wondered if I should bother with the third one, but suspect I'll eventually get to it, the next time I need some silly fun.

Also, I took Pride and Prejudice and Zombies back to the library unread because I found the first few pages too gimmicky to bear; so I had to find another library book, stat! and this was it.

I also began a famous classic of SF while kicking back in the clean air of northernish Ontario (and which I finished a few days ago): Walter M. Miller, Jr.'s A Canticle for Leibowitz. This was an extremely enjoyable novel. I think had I read it when I was a teenager it would be in my top 10 of all time. As it is, I respect it highly as a post-apocalyptic nightmare that had a lot of disturbing relevance to its time (published 1959) and was a great story AND was well written.

I think what I loved best about this novel was Miller, Jr.'s examination of how relics become sacred...based as these processes so often are on complete misunderstanding. I thought it was a fascinating look at the ways humans use the past and why it's so important to us, even as we imagine we're evolving and leaving it behind.

And finally...the book that I've closed the cover on. I'm feeling disappointed in myself for this one but it can't be helped. As I mentioned last week, I think, I was going to be reading Charlotte Bronte's Villette in order to participate in Rohan's summer discussion thereof over at The Valve.

That won't be happening and here's why: I read the first 8 chapters as per the schedule and then on Tuesday, I went to The Valve and read the comments already there and tried to say something coherent myself and then went back later...and started to freak out. Because even though it's not school, it felt like school and I couldn't deal. It's too soon. But not only can I not participate in this event, I can't even read the book, dammit, for after freaking out upon reading the comments, I freaked out again when I tried to go back to the book! :( Sad times.

But I'm going to try to do the optimistic thing in response to this backsliding: my plan is to finish my Henry James short stories by my birthday, which was 3 weeks from yesterday!!! It's more than possible as I have only 210 pages left - but then it's been more than possible for months now. So, friends, I'm going to need your help. Send me pep talks to help me put the Henry James to bed! I'll post updates on my progress that will look like this:

School was mostly diagnosing fictional characters with mental illnesses based on almost no evidence? My worst fears are confirmed.

Kidding, sort of. That Villette thread went is an unhealthy direction.

You're reading the LOA Henry James, right? Is "The Madonna of the Future" in those 210 pages? Cuz that's supposed to be a good one.

Well, I was one of the ones making claims about Villette sans evidence, apparently, so I apologize. :)

I don't know what LOA stands for but I'm reading *a lot* of Henry James. I've already read "The Madonna of the Future" (about 700 pages ago) and it's one of my favourites from the collection, so far. "The Aspern Papers" was also extremely compelling. But James's writing is always superb so I never dislike his stuff even when he's just phoning it in.

Second, oh no, you weren't diagnosing Lucy with post-traumatic stress disorder and so on. I reread your comment - I think it's spot on, including the point on which you were supposedly corrected. Someone (not you) misread the tense of a verb somewhere.

But anyway, next time, right? By the way, I loved the post on bus readers.

Ah, Library of America, of course. I am reading the Everyman Library edition of James's Collected Stories. And I'm only trying to complete volume 1! I'm not sure when I'll find the chutzpah to even begin volume 2...

Absolutely, next time. I can't imagine still being post-PhD heartsick a year from now!

Sorry to hear you didn't like Parry Sound Books. It is definitely geared towards the get-in-get-out crowd, but that's life in the Hoot. The name of the street that escaped you was probably Seguin. Anyway, glad you got to see the local colour and even more glad you spent a few bucks to keep the streets swept...
Cheers!
Jacob

Hello! I am an avid attendie of the Barely Used Book Store and work in the McKellar Public Library. I love Barely Used Book's for its enviroment. The Lady who works and runs the store is a dream. Any Questions on any subject and she's right there with answers and help. They have a amazing history section and I'm amazed at their size of forgien books as well. There is an enormous section of German and French books for those searching for something beyond the English Language.
Nice of you to visit the area :)
Kelsey