That Coetzee is a tricky one

It's been a number of years since I've read any of J.M. Coetzee's work, in large part because I found Disgrace to be such a traumatizing read (as I was warned it would be, and which warning I ignored). Disgrace was upsetting purely because of the subject matter, which I'm not interested in talking about even now; what made it more difficult to deal with, perhaps ironically, is just how phenomenal the writing was. Coetzee is truly a master of his craft, I can't deny that, even if I've found all his characters in my past reading of his works to be either loathsome or unspeakably pathetic, and neither in ways I could take any real pleasure in.

But pleasure isn't really what I think Coetzee wants his readers to experience even if in spite of all else, we do and must take pleasure in how simultaneously beautiful and coldly concise his language is. So, when Mr. Kevin demanded that I read Coetzee's latest, Diary of a Bad Year, I was hesitant. But as he has a black belt in Cormac McCarthy, I was afraid to say no.

In fact, I was interested to revisit Coetzee now that I'm older. I don't think he's really an author for the young and before Kevin made the suggestion, I'd started to become vaguely interested in discovering whether or not I could engage more with, or at least better respect, what Coetzee does. It seems I could, for I enjoyed Diary of a Bad Year extremely - but it was more than enjoyment, for that's more often a predominantly emotional experience for me. Reading this book was also a deeply satisfying cerebral experience.

The novel's unique structure - three narratives running almost, but not quite, simultaneously from 2 characters' points of view - was absolutely engaging and probably would not have worked in the hands of a less capable writer. The writing was absolutely stunning and to my surprise, it was the main character's essays on various topics (for inclusion in a book called Strong Opinions) that most appealed to me - mostly because they were so lucid and compelling, unlike most essays I've been accustomed to reading. Finally, the story, which while very simple, was likewise engaging. 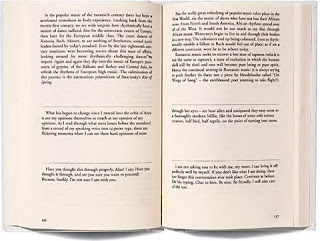 What's fascinating to me about Diary of a Bad Year is that, Coetzee's characters are no less despicable than usual, but somehow I wasn't bothered by this. In fact, I was actually relieved that he didn't sugar-coat anyone's motives for the reader, even as he allowed them to try to sugar-coat things for themselves. Given that all the narratives were first person, that distinction is quite a feat.

What I also found compelling about this novel, but which I've found irritating about Coetzee's work in the past, is how slippery he is; where he stands in relation to his artistic creation is really quite ambiguous. It's a position that's growing on me. Early in Diary of a Bad Year, the main character, J.C., argues, in one of his essays ("On Al Qaida"), that the incompetent and paranoid prosecutors of many post-9-11 suspected terrorists learned the very basis of their convoluted and logically suspect techniques, the so-called skills that got them hired and promoted, in university humanities courses:

Where did the prosecutors learn to think in such a way? The answer: in literature classes in the United States of the 1980s and 1990s, where they were taught that in criticism suspiciousness is the chief virtue, that the critic must accept nothing whatsoever at face value. From their exposure to literary theory these not-very-bright graduates of the academy of the humanities in its postmodernist phase bore away a set of analytical instruments which they obscurely sensed could be useful outside the classroom, and an intuition that the ability to argue that nothing is as it seems to be might get you places. (p. 33)

Oy vey, it wasn't intuition - as humanities departments have become increasingly squeezed by budget cuts and the need to compete with other disciplines boasting more applied (read, applicable to a so-called pragmatic reality) forms of research, they've actively encouraged students to consider the myriad ways a humanities degree is useful beyond the study itself. I've been on both the receiving and professing ends of such talks because gawd knows, an education can no longer be justified for its own sake. Sigh.

It would seem as though J.C. (or Coetzee) is lamenting Western culture's move away from a more appreciative, less deconstructive (or destructive), approach to the study of literature, etc - and yet, the very structure of this novel, the three characters and their complicated uses and desires for each other, make pure appreciation or something constructive much more difficult approaches to take with this novel than with something like, something like a Dickens or Eliot novel.

It would seem that Coetzee sets up a particular problem with reading that has arguably helped to create deeper cultural problems in how humans relate to one another, and then creates a novel that invites specifically that kind of reading, and THEN implicitly challenges us to see if we can resist the siren song and all our reading training, formal and informal, and approach this novel differently! I love it, but I'm not sure I'm capable of meeting this challenge.

I am really pleased that this book was pointed out to me, for I would not have sought it out. Thanks again to Mr. Kevin.

This is also the last book I'll be reading for J. Kaye's Support Your Local Library Challenge. When I joined the challenge, I recall that participants were to choose how many books they wanted to do; I chose 20, which I later regretted a little - you know how allergic I am to either commitment or planning. I've since revisited the site, and the instructions were to do either 12, 25, or 50. I will certainly continue to borrow library books, I can't help it really, but I'm not going to be counting them anymore as this is #12.
Posted by Bookphilia at 12:41

Okay, well, I may have been a little carried away. I didn't find Juan and Anya despicable per se, but I don't think we're meant to trust entirely their representations of themselves either.

And if we can't trust their representations of themselves, one wonders if Alan was represented accurately, or if he was represented in a way that contributed to Anya's and Juan's notions about themselves and each other as a victim and a compassionate uber-woman, respectively.

Also, I found Anya initially annoying and shallow - so much so, that I wasn't comfortably convinced by her increasing care for the old man. I really wonder about her motives for considering going back to take care of him at the end of his life. And I don't think that Alan's ideas about J. being an old perv were entirely wrong either.

I just don't think Coetzee believes in making anything easy for his readers.

And even in ostensibly completely private and therefore "true" forms of writing, like diaries, writers are constantly editing for audience even if they don't know it - and given Alan's plan which Anya at least knew about - it's not as though most people would believe in a form of writing that would be infallibly resistant to invasion.

So, no, despicable wasn't the right word for J. and A. but I don't trust them or like them a lot either.