My lethal weapon's my mind

Last night, hubby and I were book browsing and I found a most horrifying thing: a new paperback edition of Emily Bronte's Wuthering Heights geared directly and solely towards the sort of girl who would obsessively read Stephanie Meyer's Twilight books but would be hard-pressed to try anything else. This edition not only mimics the (much-mimicked) black with lurid red something-or-other Twilight covers, but also states that this novel is "Bella and Edward's favorite book": 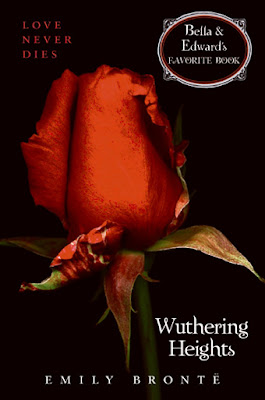 Brook and I mocked and lamented this cover for its lameness. Yes, I know that getting kids who might otherwise entirely skip over the Victorians to read a Victorian novels is something for which one can make a positive argument. But I find I find this approach - presenting a novel published in 1847 as being merely of additional interest to the "core" Twilight texts - to be both offensive from a literary appreciation point of view but also, ultimately, counter-productive to this notion of getting kids beyond their focus on Twilight. I worry this kind of messaging will create an endless loop in which Twilight-invested readers will ask not "What can I read next?" but rather "What, like Twilight, can I read next?"

An editor at the Chicago Tribune online noted this edition of Wuthering Heights back in the Fall and referred to the sort of trend such an edition represents as the "Facebookization" of literature. A scornful and insightful jab at the rather sadly apologetic approach to marketing a classic this edition represents - yet, something new and modern in terms of marketing is required to get kids reading books at a level and intensity that was more natural and common when I was a kid, and much more natural and common when my folks were kids. I'm just not convinced this sort of thing is it.

Something rather more positive, exciting, and intelligent is going on in Australia, as the lovely bloggers over at Book Patrol pointed out yesterday: marie claire magazine, in order to help combat shockingly high illiteracy rates in remote indigenous communities, has recruited some of the country's biggest stars to help with a visual marketing campaign to show how amazingly cool and glam books are and, of course, to raise money for literacy initiatives. Showing Australian stars in imaginative relationship to their favourite books, these photos celebrate rather than apologize for the reading of "hard" classic novels. Below is my favourite shot but you can check them all out here. 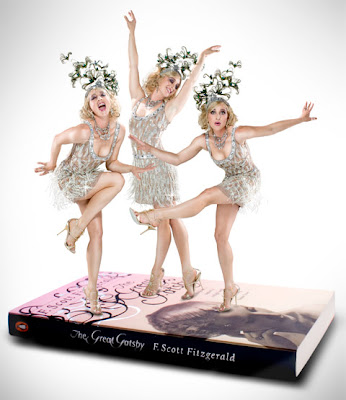 I think these are incredibly well done and everything about the campaign, including the celebratory and inviting title "The Wonder of Words", speaks to me of a gesture towards the sheer pleasure of reading - which I think is key to creating life-long readers. I have two concerns though: first, where are the famous readers of colour - any colour! - to glam it up for the camera with their favourite tomes? It seems to me that if you want to appeal to indigenous readers a little multiculturalism could go a long way.

Second, why are there no male stars included in this campaign? Like the dubious Wuthering Heights marketing discussed above, this campaign seems to address only female readers. I see no reason why the marie claire campaign can't reach out to male readers, even if it is a women's magazine - because surely this campaign won't be confined to the pages of its magazine.

Indeed, I think marie claire's approach is the kind of approach that would be highly successful geared towards young readers of both genders. The Penguin Classics covers that provide comic book snippets of the classic texts, such as this one of Lawrence's Lady Chatterley's Lover, might be an effective appeal to boys and young men: 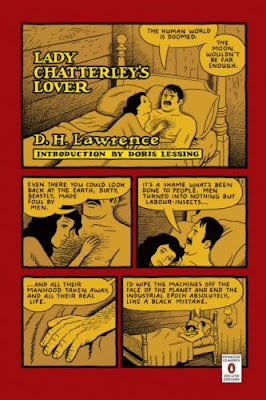 But I think there's a whole untapped resource in male musicians and movie stars, not to mention sports heroes, as an article about NBA players in the Wall Street Journal online implies but doesn't address. Don't be put off by the use of the word "nerd" in the title of the article either; the idea of the nerd is one that's been undergoing some positive evolution over the years and the fact that genetic lottery winner LeBron James dresses like Carlton Banks off-court means that the nerd and the basketball are absolutely not antithetical terms. And indeed, the NBA has its Read to Achieve program, or theoretically it does - the link provided doesn't seem to have been updated recently. 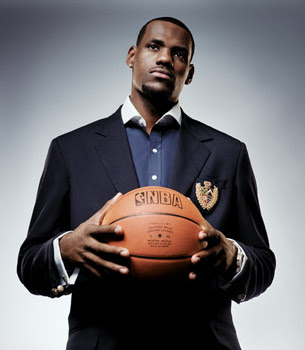 The Toronto Raptors have more recently than this link implies been doing some Read to Achieve activities; but while I like the idea of athletically gifted man-mountains reading kidlets stories, realistically, not many kids are going to get to have that experience. And I wonder, anyway, how much of the joy of that experience is about being in the same room as Chris Bosh or whomever, and not about the book per se. My ideal would be for the NBA to do their own version, with key players, of what marie claire is doing.

And maybe also for Ice-T or someone younger and cooler to do a remake of "My Lethal Weapon" - his lethal weapon being his mind, of course, and the video culminating with him sitting in the library looking tough and reading a book. Ahhh yeah.

PS-I like my idea of the NBA doing a manly glamour shot campaign of its stars with their favourite books so much that I've sent them an email which will likely get lost in the bazillion emails they get each day. But hey, it seems worth trying to get out there.
Posted by Bookphilia at 09:33

My favorite ad was the one for Valley of the Dolls. Very glamorous!

I agree that a reading campaign featuring sports stars would be pretty awesome--but I wonder how many sports stars are big readers? Just based on my personal RL observation, guys who are into sports don't generally go for the reading thing.

The GAA did a small sort of 'favourite books of sports heroes' campaign over here, showing young men that their heroes also read. Not sure how successful it was, mind you.

Re the Wuthering Heights campaign - whatever works works, I think and sneer all you want at the campaign, it's at least an effort. Mind you, my daughter and I went looking for a non school edition of WH recently. (She wanted to buy it for her bf who was emigrating, and wanted something without all the school notes attached)We were drawn to a beautiful re-cover of a black background with a white crocus on it. Daughter was chuffed! Stunning, she said. Then she saw the 'Edward and Bella's favourite book' tag and dropped it with a snort. Wouldn't buy that edition because it was 'insulting'. And she DEVOURED the Twilight books. I wonder if the plan will backfire on them?

Gotta love marketing campaigns. They tried something similar for Harry Potter, not woth book covers but by marketing books as being just like Harry Potter. I don't think it really worked. Like the Marie Claire shots, really well done. I am not surprised they are all women given that Marie Claire's audience is all girls. I hope your NBA email gets discovered. I think it's a great idea!

I love the marie claire ads! And I've always liked that Lawrence cover - so clever!

The Twilightization of classics, on the other hand, is something I'm less than happy with :\ I guess that if it will get some teens reading classics, and that's not a bad thing, but I agree with you that it promotes a more-of-the-same mentality.

cynthia at the daily basics said...

I cannot believe the Wuthering Heights book cover. Okay, they will get the Vic Lit crowd, that's a good thing, but it is almost sacrilegious to misrepresent our beloved books that way (they're my comfort books, the ones you re-read at least once a year?) So, I am torn between 1)get them to read and love it 2) keeping it real

heidenkind: Many international NBA players at least, as discussed in an article I linked to in this post, are huge readers. And the coach of the LA Lakers apparently hands out books to his players...so you never know.

Celine: Any idea why your daughter disliked the WH/Edward Bella cover when she liked Twilight?

Stefanie: I got a form letter back from the NBA. Ah well!

Nymeth: Yes, the Lawrence cover is brilliant. I would like to see more classics done up this way.

cynthia: Yeah, it is complicated. I personally care a lot about how my books look (e.g., I won't be novels I'm interested in if they feature a still shot from a movie version) and I think most people do.

I know exactly why.
She out grew Twilight almost as she was reading it. Though she read the series compulsively, and looks back fondly on the fun she got out of it, she now thinks it's rubbish. She wanted to buy WH because she and her friend love the book ( we study it in school over here - only saying that because I'm not sure if you guys do) When she saw the E and Bella label, she felt annoyed that folks would think she was buying it only for that. She spent ages looking for a different version ( finally found on in the classics section) but was truly miffed that she couldn't get the beautiful crocus cover without seeming to be influenced by the twilight appeal.

(BTW: I'm with you on the movie tie in covers - I'd rather an original cover)

Celine: I don't think WH is studied in school here. When I was in school, we read all of the dystopias (Fahrenheit 451, Animal Farm, 1984, The Crysalids), some Canadian Lit from the 1970s, some Shakespeare, Great Expectations, and A Separate Peace. As far as I can tell, nothing has changed. Sigh.

That's pretty much what we would have studied too, along with WH and some Jane Austin and some French surrealist stuff. I think that's a pretty good range for 11 to 17 yr old kids to be honest :0)