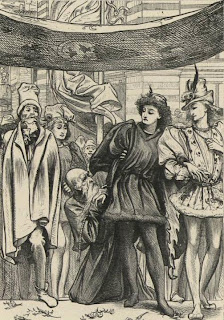 In my post last week on the first volume of George Eliot’s Romola, I noted the shocking use of the image of infanticide to describe Tito’s moral degeneration: “Our deeds are like children that are born to us; they live and act apart from our own will. Nay, children may be strangled, but deeds never: they have an indestructible life both in and out of our consciousness” (p. 219). In the second volume of Romola, this ghastly image as it relates to Tito’s behaviour is often revisited, and with increasingly lurid intensity.

Faced with an opportunity to either repent and atone, or to continue on his increasingly dishonest path through life, Tito chooses the latter – and the rest of the volume chronicles the consequences both for Tito and those around him.

Spoilers, my friends, spoilers
Tito’s second crime, which is to deny his father’s identity when confronted with him in the flesh, after having decided against searching for the old man sold into slavery, is described in terms of a monstrous birth:


He might have declared himself to have had what he believed to be positive evidence of Baldassarre’s death; and the only persons who could ever have had positive knowledge to contradict him, were Fra Luca, who was dead, and the crew of the companion galley, who had brought him the news of the encounter with the pirates. The chances were infinite against Baldassarre’s having met again with any one of that crew, and Tito thought with bitterness that a timely, well-devised falsehood might have saved him from any fatal consequences. But to have told that falsehood would have required perfect self-command in the moment of a convulsive shock: he seemed to have spoken without any preconception: the words had leaped forth like a sudden birth that had been begotten and nourished in the darkness. (pp. 286-7)

Tito’s denial of his father "begets" a man with nothing left to lose and no desire remaining save vengeance. And because the only thing left to Tito’s father is revenge, we are promised, fittingly, the death of no other than his own child, Tito. Baldassarre's feelings, as vicious as they are, make disturbing emotional sense in the familial vacuum Tito has created:


I watched till I believed I saw what I watched for. When he was a child he lifted soft eyes towards me, and held my hand willingly: I thought, this boy will surely love me a little: because I give my life to him and strive that he shall know no sorrow, he will care a little when I am thirsty—the drop he lays on my parched lips will be a joy to him . . . Curses on him! I wish I may see him lie with those red lips white and dry as ashes, and when he looks for pity I wish he may see my face rejoicing in his pain. It is all a lie—this world is a lie—there is no goodness but in hate. Fool! not one drop of love came with all your striving: life has not given you one drop. But there are deep draughts in this world for hatred and revenge. I have memory left for that, and there is strength in my arm—there is strength in my will—and if I can do nothing but kill him – (pp. 338-9)

Baldassarre, being both unsuccessful and dissatisfied with physical murder, however, attempts a more complete and prolonged death for Tito – social humiliation and the destruction of his prospects. In this he fails as well, and Tito is thus presented with another opportunity to strangle whatever moral uprightness and familial care he has left in him – and he takes it:


All glances were turned on Tito, who was now looking straight at Baldassarre. It was a moment of desperation that annihilated all feeling in him, except the determination to risk anything for the chance of escape. And he gathered confidence from the agitation by which Baldassarre was evidently shaken. He had ceased to pinch the neck of the lute, and had thrust his thumbs into his belt, while his lips had begun to assume a slight curl. He had never yet done an act of murderous cruelty even to the smallest animal that could utter a cry, but at that moment he would have been capable of treading the breath from a smiling child for the sake of his own safety. (p. 422)

Eliot’s previous uses of the metaphor of child murder in relation to Tito’s moral failings have focused more on the instinctive desperation borne out of “giving birth” to hideous consequences unforeseen and misunderstood. Here, we see Tito consciously engage in such cruelty; Tito has been aware of his father’s presence in Florence for quite some time before this confrontation occurs and he has correctly guessed that vengeance will be Baldassarre’s only goal, and he's been mentally and physically preparing himself for the strike.

This scene, shocking as it is on its own, also clearly draws upon literature’s most famous and perhaps most gruesome image of deformed and vicious maternity, Shakespeare’s Lady Macbeth. I have in mind specifically that famous scene in which she convinces her husband to murder Duncan, his metaphorical father:


I have given suck, and know
How tender ’tis to love the babe that milks me:
I would, while it was smiling in my face,
Have pluck'd my nipple from his boneless gums,
And dash'd the brains out, had I so sworn as you
Have done to this. (I.vii.55-60)

These images convey the extent and depth of appalling Tito’s familial rejections – for what could be more disturbing than the murder of something so helpless as a newborn babe? But why use images of perverted maternity so pointedly with a male character to begin with? Given that the source of all Tito’s moral failing is his refusal to behave as a proper son to a father, what are the implications of this specifically female image in relation to a crime between men?

I see Eliot here both confirming and denying the centrality of the mother to Victorian notions of the stability of the family. On one hand, the mother remains the source and symbol of ultimate emotional importance and therefore perverted maternity carries the greatest weight for describing the destruction of familial relationships. On the other hand, by leaving Baldassarre to languish in slavery and then by failing his father-in-law, Bardi, in two key ways, Tito destroys the foundation of family life as a whole, handily and with no female help required. The result, I think, is not a rejection of the centrality of motherhood per se, but an insistence upon the equal power - both creative and destructive - of the male in the family unit in the terms normally attributed only to the maternal figure.

Indeed, it is Tito’s rejection of morality and duty which make his promise of an intellectually and emotionally fruitful union with Romola barren. And this barrenness is reflected both in Romola’s increasing distance from her shallow husband as well as in their literal childlessness:


At certain moments—and this was one of them—Romola was carried, by a sudden wave of memory, back again into the time of perfect trust, and felt again the presence of the husband whose love made the world as fresh and wonderful to her as to a little child that sits in stillness among the sunny flowers: heard the gentle tones and saw the soft eyes without any lie in them, and breathed again that large freedom of the soul which comes from the faith that the being who is nearest to us is greater than ourselves. And in those brief moments the tears always rose: the woman's lovingness felt something akin to what the bereaved mother feels when the tiny fingers seem to lie warm on her bosom, and yet are marble to her lips as she bends over the silent bed. (p. 389)

For Romola, the child that Tito figuratively murders is both her own emotional innocence as well as the beautiful potential once promised by their marriage – but he is not the one who must do the majority of the grieving for these losses, for he feels his acts and their consequences much less keenly than the sensitive and alert Romola does.

Further, it is not even that Tito is barren per se; he does, after all, produce a child, with the painfully trusting and mentally deficient Tessa. Like all the ugly actions and difficult consequences Tito has already begotten, she and their offspring are placed safely out of sight, yet sit with cankerous potential just beyond the view of the social circle in which Tito currently finds so much success and meaning for himself.

Conversely, maternity, so venerated by the Victorians, is denied Romola; and indeed, the second volume concludes with her literally abandoning all possibility of ever claiming such an identity for herself by not only fleeing Florence and her husband but also by doing so disguised as a nun. She becomes the visual image of a woman barred from the expectations of a life of literal mothering. And yet, the serendipitous arrival of Savonarola seems mystically to offer another maternal path to be trodden.

And now, onto the denouement, which I am both greatly anticipating and deeply dreading - for no, I do not want this book to end!
Posted by Bookphilia at 13:21

Ah, Tito. So devious, so stupid. The inspiration for a communist leader and a member of the Jackson 5. Enjoy the last part :)

I keep getting hints about the last part maybe being a bit...strange. Looking forward to having the time to sit down and get through the final 50 or so pages!