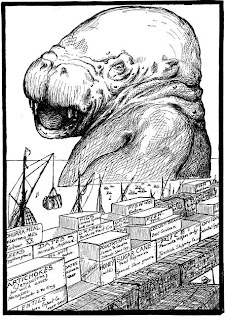 I have recently finished reading Rudyard Kipling's Just So Stories, which has been hanging around my house a long time. We have a cool hardback version from the early 1950s, which I have long admired for its pure bookliness. (Bookliness = the adjective to describe comely books.)

I admire this book as well for Kipling's good stories, super-amazing woodcut drawr-ings, and the hilarious commentary that accompanies them. For example, to your left you will see Kipling's picture of Small Porgies, a creature who makes a cameo appearance in the book's final tale, "The Butterfly That Stamped." The story is pretty great, but check out the commentary on the picture:


THIS is the picture of the Animal that came out of the sea and ate up all the food that Suleiman-bin-Daoud had made ready for all the animals, in all the world. He was really quite a nice Animal, and his Mummy was very fond of him and of his twenty-nine thousand nine hundred and ninety-nine other brothers that lived at the bottom of the sea. You know that he was the smallest of them all, and so his name was Small Porgies. He ate up all those boxes and packets and bales and things that had been got ready for all the animals, without ever once taking off the lids or untying the strings, and it did not hurt him at all. The sticky-up masts behind the boxes of food belong to Suleiman-bin-Daoud's ships. They were busy bringing more food when Small Porgies came ashore. He did not eat the ships. They stopped unloading the foods and instantly sailed away to sea till Small Porgies had quite finished eating. You can see some of the ships beginning to sail away by Small Porgies' shoulder. I have not drawn Suleiman-bin-Daoud, but he is just outside the picture, very much astonished. The bundle hanging from the mast of the ship in the corner is really a package of wet dates for parrots to eat. I don't know the names of the ships. That is all there is in that picture.

Having a dad so silly AND creative AND smart must have been totally awesome. (Well, my dad is creative and silly and smart, but he doesn't write books. When we lived together, we used to have hours-long adjective contests, when we'd just list off the weirdest, most obscure adjectives we could think of, until we could think of no more. Now you're either thinking that I'm the weirdest or the coolest person ever. Hint: it's the former.)

Too bad about the racist part of cool dad Kipling. Yeah. I'd never read any Kipling before Just So Stories, not even his (in)famous poem "White Man's Burden." All the stories in this tome are pretty much not-racist, except for "How the Leopard Got His Spots", which begins in the usual lovely way and then sucker-punches you with the N-bomb and some other nasties. Sigh.

It's not that I hadn't heard Kipling was problematic in terms of his racial views, but that I hoped it somehow hadn't extended to his kiddy lit. And it mostly didn't, but then it did. I kind of feel that if you excised this one story, you'd have one of the best children's collections ever. But then it wouldn't really be Kipling would it? And that opens up a whole can of worms fit for a Philosophy of Art class or something.

On Friday, I will celebrate the end of my third year of Bookphilia. I'll be providing a list of may favourite books of the last year and making absolutely no promises or predictions about the coming year.
Posted by Bookphilia at 13:20

Well, everyone has problems I guess. Haha. It is interesting that Kipling is still pretty famous despite all the racial slurs.

Haha, totally. In a moment of karmic bad luck, I've managed to pick up a book much fuller of racial slurs: The Lair of the White Worm. Sigh.