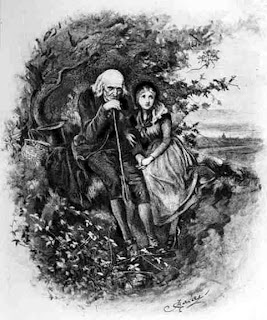 The similarities (at least so far) between Little Dorrit and Little Nell, the young heroine of The Old Curiosity Shop, are hard to miss – a young girl, possessed of almost supernatural familial devotion and a gift for self-effacement, threatened by increasing poverty and others’ desires for her, regardless of any desires she might have for herself (which she doesn’t, really, of course – except as it relates to those she loves). They seem like ciphers, and I'm not convinced Little Dorrit isn't one; only time will tell with Nelly.

But one difference between the two which I’ve been immediately struck with, in only the first 75 or so pages of The Old Curiosity Shop, is how terrifyingly sexual are the clouds gathering around the naïve, 13-year old Nell. Already she is the subject of two plots to either force or trick her into marriage – by her brother, with his friend, the ever charming Dick Sniveller; and by the rapacious and cruel dwarf Daniel Quilp:


The child uttered a suppressed shriek on beholding this agreeable figure; in their first surprise both she and the old man, not knowing what to say, and half doubting its reality, looked shrinkingly at it. Not at all disconcerted by this reception, Daniel Quilp preserved the same attitude, merely nodding twice or thrice with great condescension. At length, the old man pronounced his name, and inquired how he came there.

'Through the door,' said Quilp pointing over his shoulder with his thumb. 'I'm not quite small enough to get through key-holes. I wish I was. I want to have some talk with you, particularly, and in private. With nobody present, neighbour. Good-bye, little Nelly.'

Nell looked at the old man, who nodded to her to retire, and kissed her cheek.

'Ah!' said the dwarf, smacking his lips, 'what a nice kiss that was-- just upon the rosy part. What a capital kiss!'

Nell was none the slower in going away, for this remark. Quilp looked after her with an admiring leer, and when she had closed the door, fell to complimenting the old man upon her charms.

The old man answered by a forced smile, and was plainly struggling with a feeling of the keenest and most exquisite impatience. It was not lost upon Quilp, who delighted in torturing him, or indeed anybody else, when he could.

'She's so,' said Quilp, speaking very slowly, and feigning to be quite absorbed in the subject, 'so small, so compact, so beautifully modelled, so fair, with such blue veins and such a transparent skin, and such little feet, and such winning ways-- but bless me, you're nervous! Why neighbour, what's the matter?' (pp.71-73)

Before reading this and other similar (although somewhat less overtly repellent) scenes in The Old Curiosity Shop, I had been accustomed to a Dickens with, maybe not a gentler touch, but at least a more innocent one. Nelly is as vulnerable as a gothic heroine with white heaving bosoms in a cruel and licentiate lord’s haunted castle, but this isn't one bit hilarious – and her prison is the wide world of London-town and her jailer is her socio-economic vulnerability combined with the defenselessness of being a teenaged girl without family to speak of. There are no supernatural elements to help her out, and the kindly gentleman who began her story, and who expressed interest in contributing to her well-being, has disappeared – having turned his first person narrative over to an impersonal and powerless third person and disappeared from the story!

When I read Our Mutual Friend about two years ago, I was struck by how cynical it was compared to the other Dickens novels I’d read. In retrospect, it was cynical in a literary way, a sort of 17th-century Shakespearean way – it reminded one of the cruel tests to which the Bard put his heroes and heroines in the late, so-called “problem plays”; it was literarily, if not emotionally, challenging. And while I wouldn’t be surprised to learn that The Old Curiosity Shop is also in part literary homage - reading it has been reminding me of Wm. Blake’s most agonizingly bitter images from Songs of Innocence and Experience - the bitterness about Nell’s position seems more sordidly realist than literary homage can possibly allow. She is the subject of sexual predation by men whose souls are viciously mangled whether or not their bodies match; her primary caregiver loves her but is a helpless gambling addict and becoming infirm with age to boot; her friends, those she has, are impossibly weak (Mrs. Quilp) or hopelessly hindered by birth (Poor Kit) or like the novel’s first narrator, given to disappearing without explanation. If help is forthcoming, it won't be coming from quarters with which Nell is already familiar. I will find out later, when there's time to pick up my novel again; until then, I fear for her almost bodily.
Posted by Bookphilia at 22:17

This is very interesting. Have you read Hard Times? Because Louisa Gradgrind, too, is menaced with explicit sexual aggression by Bounderby. Early on he kisses her cheek and she rages after to her brother that she'd like to cut the spot out with her knife. Wow: no smarmy sentimentality there!

I was just about to read Old Curiosity Shop but enough people on Twitter said it was bad that I chose Our Mutual Friend instead (just a few chapters in). Dickens is always so surprising.

You know, I'm pretty sure I have read Hard Times but I so completely don't remember anything about it that I may as well not have done so. Perhaps I'll add it to Vic Lit list.

I've also heard OCS is bad...but so far, I have no idea why people think so.

Gracious! That description! I read a lot of Dickens in my teens, but not these, which is just as well because I probably wouldn't have been able to handle Nell or Little Dorrit.

"Bad" can mean a lot of things. It is easily worth reading once.

The story, for example, is Dickens' most purely improvised story, meaning he apparently had no idea where he was going from episode to episode (thus, the vanishing first narrator). This can hardly result in a good story, but in hands as skillful as Dickens's, some amazing things can happen.

I will say no more, Colleen, except: agree, agree, agree. Agree about Blake; agree about the disturbing threats - I mean, those scenes between Quilp and his wife! Yee-ikes! And you must have passed the point where Quilp sleeps on Nell's bed. Yee-urgh!

Great post Colleen. We tend to think that the 19th century was more coy about sexuality. We think, sometimes, that we invented it, or, at least, that we invented openness. BUT Thomas Hardy also deals with abusive sexuality too - pretty clearly (?) though it's a while since I've read him.

I haven't read these two Dickens ... my next one though is to be Out mutual friend.