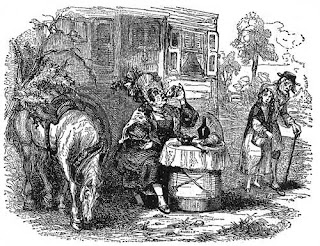 It seems appropriate to be reading Dickens's serialized and disjointed The Old Curiosity Shop in small, disjointed bursts while commuting to and from work. It also seems appropriate to be writing my impressions as I go along...I have no plan for a holistic consideration of the novel's meaning (yet...?), and perhaps as some disappointed Dickens fans have suggested, neither did Dickens when he wrote the damned thing. This novel is certainly somewhat scattered...but I'm not convinced it's without method. We shall see.

What follows might be considered plot spoilers
So, what are Nell and her granddad doing at this point in my reading? Right now, they’re working for Mrs. Jarley’s travelling waxwork show, barely escaping detection by Quilp et al, and increasingly unsuccessfully managing Granddad’s gambling addiction. Meanwhile, in London, the slow but good-hearted and devoted Kit continues to hope for Nell’s return, and in the meantime is enjoying his first taste of gainful employment with the Garlands. Dick Sniveller is “working” for a legal outfit firmly under the gigantic and ruthless thumb of the diminutive Quilp; Quilp continues to lurk, sneer, laugh maliciously, pinch, taunt, and show up quietly in surprising places; Nell’s brother is either holding his cards close, or Dickens has momentarily forgotten about him; Mrs. Quilp, presumably, continues to feel oppressed and frightened by her husband; the Brass siblings, partners in their law practice, continue to do Quilp’s bidding, keep a mysterious lodger who is intensely but perhaps not malevolently interested in finding Nell, and keep a servant. This servant is very small, frail, female, and exceedingly timid. We don’t know her name, or anything about her family or history. But we know this about her position with the Brass family:


The small servant stood with humility in presence of Miss Sally, and hung her head.

'Are you there?' said Miss Sally.

'Go further away from the leg of mutton, or you'll be picking it, I know,' said Miss Sally.

The girl withdrew into a corner, while Miss Brass took a key from her pocket, and opening the safe, brought from it a dreary waste of cold potatoes, looking as eatable as Stonehenge. This she placed before the small servant, ordering her to sit down before it, and then, taking up a great carving-knife, made a mighty show of sharpening it upon the carving-fork.

'Do you see this?' said Miss Brass, slicing off about two square inches of cold mutton, after all this preparation, and holding it out on the point of the fork.

The small servant looked hard enough at it with her hungry eyes to see every shred of it, small as it was, and answered, 'yes.'

'Then don't you ever go and say,' retorted Miss Sally, 'that you hadn't meat here. There, eat it up.'

This was soon done. 'Now, do you want any more?' said Miss Sally.

The hungry creature answered with a faint 'No.' They were evidently going through an established form.

'You've been helped once to meat,' said Miss Brass, summing up the facts; 'you have had as much as you can eat, you're asked if you want any more, and you answer, 'no!' Then don't you ever go and say you were allowanced, mind that.'

With those words, Miss Sally put the meat away and locked the safe, and then drawing near to the small servant, overlooked her while she finished the potatoes.

It was plain that some extraordinary grudge was working in Miss Brass's gentle breast, and that it was that which impelled her, without the smallest present cause, to rap the child with the blade of the knife, now on her hand, now on her head, and now on her back, as if she found it quite impossible to stand so close to her without administering a few slight knocks. But Mr Swiveller was not a little surprised to see his fellow-clerk, after walking slowly backwards towards the door, as if she were trying to withdraw herself from the room but could not accomplish it, dart suddenly forward, and falling on the small servant give her some hard blows with her clenched hand. The victim cried, but in a subdued manner as if she feared to raise her voice, and Miss Sally, comforting herself with a pinch of snuff, ascended the stairs, just as Richard had safely reached the office. (pp. 266-69).

This girl, my god. This is one of the most disturbing passages I’ve ever read. Sally’s brutality is just so…casual. Besides expressing Dickens’s frequent (and proper) outrage at the state of child labour in the London of the 1830s, this scene reminds us all too clearly how precarious Nell’s comfort and success with Mrs. Jarley is. Her grandfather is a broken, selfish old man with extremely poor impulse control; but even having him standing between her and the terrifying void of being without either family or position is better than nothing.

The spectre of the Brass’s servant helps explain why, besides familial devotion and affection, Nell would want to hang on to a grandfather who would go so far as to rob his own apparently beloved grandchild in the middle of the night to get gambling money!!! What’s beyond family is a level of vulnerability surpassing even that discussed in my previous post on Nell as subject of sexual predation. Class, gender, age – the vulnerabilities Nell experiences by being on the wrong side of all these lines would be so much more intensely magnified were she entirely alone; so, Dickens shows us a child, basically imprisoned and half dead, to remind us what is at stake for our young heroine. It’s a crafty move. On the one hand, it softens the blow of revealing that Nell is even more at risk than has already been revealed but not having Nell beaten. On the other, it reminds his gracious readers that Nell’s position (and how much worse that position might soon be!) is not unique.

To further highlight Nell's precarious hold on any comfort or safety whatsoever, Dickens shows us how well Kit and his peer Barbara are doing with the Garlands:


[N]ot only had Mr and Mrs Garland forewarned him that they intended to make no deduction for his outfit from the great amount [of 6 pounds per year], but to pay it him unbroken in all its gigantic grandeur; not only had the unknown gentleman increased the stock by the sum of five shillings, which was a perfect god-send and in itself a fortune; not only had these things come to pass which nobody could have calculated upon, or in their wildest dreams have hoped; but it was Barbara's quarter too--Barbara's quarter, that very day--and Barbara had a half-holiday as well as Kit, and Barbara's mother was going to make one of the party, and to take tea with Kit's mother, and cultivate her acquaintance.

To be sure Kit looked out of his window very early that morning to see which way the clouds were flying, and to be sure Barbara would have been at hers too, if she had not sat up so late over-night, starching and ironing small pieces of muslin, and crimping them into frills, and sewing them on to other pieces to form magnificent wholes for next day's wear. But they were both up very early for all that, and had small appetites for breakfast and less for dinner, and were in a state of great excitement when Barbara's mother came in, with astonishing accounts of the fineness of the weather out of doors (but with a very large umbrella notwithstanding, for people like Barbara's mother seldom make holiday without one), and when the bell rang for them to go up stairs and receive their quarter's money in gold and silver.

Well, wasn't Mr Garland kind when he said 'Christopher, here's your money, and you have earned it well;' and wasn't Mrs Garland kind when she said 'Barbara, here's yours, and I'm much pleased with you;' and didn't Kit sign his name bold to his receipt, and didn't Barbara sign her name all a trembling to hers; and wasn't it beautiful to see how Mrs Garland poured out Barbara's mother a glass of wine; and didn't Barbara's mother speak up when she said 'Here's blessing you, ma'am, as a good lady, and you, sir, as a good gentleman, and Barbara, my love to you, and here's towards you, Mr Christopher;' and wasn't she as long drinking it as if it had been a tumblerful; and didn't she look genteel, standing there with her gloves on; and wasn't there plenty of laughing and talking among them as they reviewed all these things upon the top of the coach, and didn't they pity the people who hadn't got a holiday! (pp. 286-87).

Lovely, yes. A cause for hope? I don’t know, but I’m sceptical. It’s not revealed how Barbara gets her place with this family, but Kit’s hiring is entirely luck-based. It’s random (in the true sense of the word, not the way the kidz these days use it) and can’t be replicated. To be sure, like the equally and improbably fortunate Nicholas Nickleby, Kit earns the blessings bestowed upon him; but it’s still ludicrous and dumb luck that got him those blessings to begin with.

Nell’s ludicrous and dumb luck in finding a place with Mrs. Jarley is somewhat comparable - except that unlike Kit, she is surrounded and pursued by those who have and will do her a variety of irreparable harms to gratify their own greed. Many of Dickens’s female characters are, shall we say, rather flat – but this has never stopped him from acknowledging that being a woman in Victorian England is a very different thing than being a man in Victorian England. Maybe I’m wrong about where I’m imagining this is all heading. But I would be beyond surprised if little Nell survives long enough to either meet a kind man to marry or finds a mysterious fortune to inherit. If she does end up all right, I'll perhaps take direction from the disbelieving Mr. Grimwig in Oliver Twist and eat my own head.
Posted by Bookphilia at 21:23

This excerpt is horrible! Even in the interest of art and social reform, such cruelty. Dickens is a keen observer of the darknesses of human nature.

Yes, it is truly horrible. And yet Dickens (or his narrators) can still be so relentlessly optimistic...