Dombey and Son - a novel without a hero?

As I was nearing the conclusion of Charles Dickens's Dombey and Son, it occurred to me that unlike Vanity Fair (which only claimed to be so), this might really be a novel without a hero. Paul Dombey, Sr. never comes close to occupying the role of hero; he is too selfish, prideful, self-absorbed, cruel. Certainly, he changes quite radically in the end but his moment for heroism has long passed by then. Young Paul might have become one but he is, of course, too good to live into adulthood. Other options? Really, only young Walter Gay has any potential in this regard and he spends a great deal too much time floundering about in the ocean trying not to drown to fulfill this role.

It's not simply absence or youth or personality defect that discounts these three potential heroes from inhabiting such a role; it's that they are either never confronted with the kinds of terrible and impossible choices that true heroes face and manage to respond rightly to, or (in Dombey's case) they respond in ways that can only be described as miserable failures. 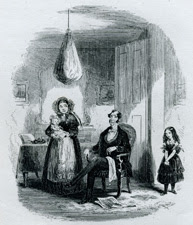 But in the end, someone does show themselves to be capable of foolish bravery and truly selfish action performed on another's behalf: Florence Dombey. Florence Dombey suffers a great deal. During her lonely childhood, her father never once makes an effort to hide his utter disinterest in her; indeed, he sees her as a threat to his relationship with young Paul, then his second wife, and always to his perception of himself.

In the early years, he worries he will come to hate her, and he does—to such a degree that upon Edith's elopement with Carker the Manager, he blindly blames Florence and physically assaults her! (Further, he never inquires into Florence's whereabouts after she flees in fear and pain, assuming she's probably with his odious sister. Bad, bad man!) She runs, finally having seen what has been clear to everyone else her whole life—that her father despises her, utterly, and does not deserve the place in her heart she's held for him. It's taken 17 years for her to see him clearly and the knowledge almost breaks her.

Up to this point, Florence is certainly a portrait of long-suffering devotion, but she is not heroic; her love is timid, mostly passive, and secret. She spends a great deal of time weeping, lamenting, sighing, placing her weary head upon her hand, and feeling like her heart is about to break. When she is forced to escape the Dombey household (which has never been eligible for the moniker "home"), she flees to the home of Sol Gills and his nephew Walter Gay, as they are the only people in her life who've ever truly helped and cared for her. Neither are there; both are lost on the ocean; but she finds Captain Cuttle, Sol's greatest friend, present and willing to hide her and nurse her indefinitely.

It takes her some time to recover but when she does, Walter has miraculously made it back to London and they soon discover that now they are young adults, their childhood friendship has become something rather more complicated. And here's where Florence begins to become something larger and braver and stronger than I would have imagined possible. Having survived one shipwreck, Walter must shortly away to sea again due to deep financial constraints; Florence responds thus:


'Are you soon going away again, Walter?'

She sat looking at him for a moment; then timidly put her trembling hand in his.

'If you will take me for your wife, Walter, I will love you dearly. If you will let me go with you, Walter, I will go to the world's end without fear. I can give up nothing for you—I have nothing to resign, and no one to forsake; but all my love and life shall be devoted to you, and with my last breath I will breathe your name to God if I have sense and memory left.'

He caught her to his heart, and laid her cheek against his own, and now, no more repulsed, no more forlorn, she wept indeed, upon the breast of her dear lover. (p. 752)

It's not simply that Florence proposes to Walter; it's that, having lost everyone she's ever loved, and had her hopes about her father so horrifically stripped away, she's capable of laying her heart completely on the line again. No other character in Dombey and Son has looked such emotional horrors in the face and remained in one piece, AND been able to continue to take important risks.

And Florence transcends even this incredible moment when a year after she and Walter sail away for China, she returns to her father who has lost everything and, locked up in his old and now empty house, is on the verge of committing suicide and can think of himself only as a thing:


Now it was thinking again! What was it thinking?

Whether they would tread in the blood when it crept so far, and carry it about the house among those many prints of feet, or even out into the street.

It sat down, with its eyes upon the empty fireplace, and as it lost itself in thought there shone into the room a gleam of light; a ray of sun. It was quite unmindful, and sat thinking. Suddenly it rose, with a terrible face, and that guilty hand grasping what was in its breast. Then it was arrested by a cry—a wild, loud, piercing, loving, rapturous cry—and he only saw his own reflection in the glass, and at his knees, his daughter!

Yes. His daughter! Look at her! Look here! Down upon the ground, clinging to him, calling to him, folding her hands, praying to him.

'Papa! Dearest Papa! Pardon me, forgive me! I have come back to ask forgiveness on my knees. I never can be happy more, without it!'

Unchanged still. Of all the world, unchanged. Raising the same face to his, as on that miserable night. Asking his forgiveness! (pp. 886-89)

But she has changed, for having a baby has made her truly understand what it means to have and lose a child, and what the bond between infant and parent ought to be. She asks his forgiveness but she shortly after informs him (gently, but without fear) that they will never part again. Not only is she still willing to lay her heart bare to him, after a lifetime of neglect and cruelty, but she is no longer a child who hopes and begs; she is an adult who demands what is right, and right for all.

Now, I personally felt a little put out that she felt the need to ask this sumbitch for forgiveness; my feelings about him have been rather more aligned with Edith's than with Florence's. But this is Florence through and through—she is heroic because her courage in being her best self only increases over time, and never breaks under the pain of ill treatment.

Of course, this is all very fantastical and sentimental. Indeed, my sister-in-law recently suggested that while it seems impossible, Dombey and Son is actually even more sentimental than The Old Curiosity Shop—and I can only agree. Dickens makes people pay for their stupidity and cruelty and selfishness and never get another chance in The Old Curiosity Shop; in Dombey and Son, the morally bankrupt are made to suffer, often a great deal, but only a few are not given another chance to make reparations and live differently.

It was so sentimental, it made me roll my eyes a few times; but I still loved it. Next on my Vic Lit list: a much less well known Thackeray novel.

Just as sentimental as TOC - and just as fantastical, with a villain who is part cat and a little boy who becomes a magical sea spirit when he dies.

Some strange stuff in these novels.