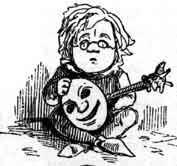 So, I had been planning to write my third and final post on Vanity Fair addressing, both ingeniously and in-depth, the way Thackeray constantly either draws attention to the bookish-ness of this book or addresses the reader directly. It's very distracting, as well as compelling. Here's an example from very early in the novel, in which our narrator breaks off describing Amelia's departure from school and all the dramatic, girly farewells, packing, etc going on, to consider how his reading public is doing—and it's only page 6:

All which details, I have no doubt, JONES, who reads this book at his Club, will pronounce to be excessively foolish, trivial, twaddling, and ultra-sentimental. Yes; I can see Jones at this minute (rather flushed with his joint of mutton and half pint of wine), taking out his pencil and scoring under the words "foolish, twaddling," &c., and adding to them his own remark of "QUITE TRUE." Well, he is a lofty man of genius, and admires the great and heroic in life and novels; and so had better take warning and go elsewhere. (p. 6)

This sort of indirect address is only outnumbered by direct addresses to “the reader”, who includes men, women, the old, the young, the rich, the indigent, and all classes in between; the moral, the immoral, the disinterested, the confident, and the fearful. Thackeray addresses everyone. He seems to have been hell-bent on constantly reminding readers that they are reading, and my favourite example of this—can you credit it?—was excised from the revised second edition (and presumably from all ensuing editions, as it is not included in the online Gutenburg Project file of the novel; it is, however, included in Peter L. Shillingsburg's Norton, bless his soul).

Just so you have a sense of where the following craziness is situated in the narrative: Early in the novel, George and Amelia accompany Becky and Jos (as well as fifth wheel, Dobbin) to Vauxhall for an evening's entertainment. Thackeray begins this chapter with a bland direct address that simply doesn't prepare one for what follows. Please to note that what is in bold is what was excised:

I know that the tune I am piping is a very mild one,—(although there are some terrific chapters coming presently)—and must beg the good-natured reader to remember, that we are only discoursing at present, about a stock-broker's family in Russell Square, who are taking walks or luncheon or dinner, or talking and making love as people do in common life, and without a single passionate and wonderful incident to mark the progress of their loves. The argument stands thus—Osborne in love with Amelia has asked an old friend to dinner and to Vauxhall—Jos Sedley is in love with Rebecca. Will he marry her? That is the great subject now in hand.

We might have treated this subject in the genteel or in the romantic or in the facetious manner. Suppose we had laid the scene in Grosvenor Square with the very same adventures—would not some people have listened? Suppose we had shown how Lord Joseph Sedley fell in love, and the Marquis of Osborne became attached to Lady Amelia with the full consent of the Duke her noble father; or instead of the supremely genteel suppose we had resorted to the entirely low and described what was going on in Mr. Sedley's kitchen—how black Sambo was in love with the Cook, (as indeed he was), and how he fought a battle with the coachman in her behalf; how the knife boy was caught stealing a cold shoulder of mutton, and Miss Sedley's new femme de chambre refused to go to bed without a wax candle; such incidents might be made to provoke much delightful laughter, and be supposed to represent scenes of "life." Or if on the contrary we had taken a fancy for the terrible and made the lover of the new femme de chambre a professional burglar, who bursts into the house with his band, slaughters black Sambo at the feet of his master and carries off Amelia in her night-dress not to be let loose again till the third volume—we should easily have constructed a tale of thrilling interest through the fiery chapters of which the reader should hurry, panting. Fancy this chapter having been headed

The night was dark and wild—the clouds black—black—ink-black. The wild wind tore the chimney-pots from the roofs of the old houses, and sent the tiles whirling and crashing through the desolate streets. No soul braved that tempest—the watchmen shrank into their boxes whither the searching rain followed them—where the crashing thunderbolt fell and destroyed them—one had so been slain opposite the Foundling—a scorched gaberdine a shivered lantern a staff rent in twain by the flash were all that remained of stout Will Steadfast. A hackney coachman had been blown off his coach box in Southampton Row—and whither? But the whirlwind tells no tidings of its victim save his parting scream as he is borne onwards! Horrible night! it was dark pitch dark—no moon, No, no, no moon—Not a star: Not a little feeble twinkling solitary star. There had been one at early evening but he showed his face shuddering for a moment in the black heaven, and then retreated back.

One, two, three! It is the signal that Black Vizard had agreed on.

"Mofy! is that your snum?" said a voice from the area. "I'll gully the dag and bimbole the clicky in a snuffkin."

“Nuffle your clod and beladle your glumbanions," said Vizard with a dreadful oath. "This way, men—if they screak, out with your snickers and slick! Look to the pewter room, Blowser—You, Mark, to the old gaff's mopus box—and I," added he in a lower but more horrible voice, "I will look to Amelia!"

There was a dead silence. "Ha!" said Vizard—"was that the click of a pistol?"

******
Or suppose we adopted the genteel rose-water style—The Marquis of Osborne has just dispatched his petit tigre with a billet doux to the Ladye Amelia.

The dear creature has received it from the hands of her femme de chambre, Mademoiselle Anastasie.

Dear Marquis! What amiable politeness! His lordship's note contains the wished for invitation to D— House!

"Who is that monstrous fine girl," said the Semillant Prince G—rge of C—mbr—dge at a mansion in Piccadilly the same evening (having just arrived from the omnibus at the opera.) "My dear Sedley, in the name of all the Cupids introduce me to her!”

"Vous avez alors un bien beau nom,” said the young Prince turning on his heel rather disappointed and treading on the foot of an old gentleman who stood behind in deep admiration of the beautiful Lady Amelia.

"I beg a thousand pardons of your Grace," said the young étourdi blushing and bending low his fair curls. He had trodden on the toe of the great Captain of the age!

"Oh D—!" cried the young Prince to a tall and good-natured nobleman, whose features proclaimed him of the blood of the Cavendishes. "A word with you!—Have you still a mind to part with your diamond necklace?"

“I have sold it for two hundred and fifty thousand pounds to Prince Eaterhazy here."

******
Thus you see, ladies, how this story might have been written, if the author had but a mind—for to tell the truth he is just as familiar with Newgate as with the palaces of our revered aristocracy and has seen the outside of both. But as I don't understand the language or manners of the Rookery, nor that polyglot conversation which according to the fashionable novelists is spoken by the leaders of ton—we must if you please preserve our middle course modestly amidst those scenes and personages with which we are most us familiar. In a word this chapter about Vauxhall would have been so exceeding short but for the above little disquisition, that it scarcely would have deserved to be called a chapter at all. And yet it is a chapter, and a very important one too. Are not there little chapters in every body's life, that seem to be nothing and yet affect all the rest of the history? (pp. 49-52)

(Thackeray doesn't leave a sentence fragment, of course. This is what replaced everything above that is bolded: “But my readers must hope for no such romance, only a homely story, and must be content with a chapter about Vauxhall, which is so short that it scarce deserves”. Also, to my infinite dismay, there are drawings included in the excised bits that I can't find anywhere online. *Weeps quietly*)

Ignoring all questions of authorial intention versus editorial intrusion when it comes to addressing either the or a “true” version of Vanity Fair; my question is, why did anyone ever think this little tangent didn't belong simply for its own glorious sake? Hilarious, distracted, satirical of contemporary reading tastes, this scene also exemplifies much of what is unique and irresistible about this novel. How many people have spent their reading lives not realizing what they were missing? It's a crime, I tell you, a crime!

Really, literary outrage is all I have to offer here. If you want something more thoughtful, coherent, or awake, I suggest you read Rohan Maitzen's piece on Vanity Fair at Open Letters Monthly, from last summer. You see, while I've had some thoughts on what heroism means in this story, my predominant response to this book has been slavish adoration. While lovingly turning the pages of this, to me, perfect literary creation, I was very often tempted to kiss the pages to show my deepest respect and commitment to them; I dream already of having sufficient time and distance to re-read it as though it were new to me.

Next up: a trip to cooler climes, Dickens's Dombey and Son, and becoming accustomed to being a 36-year-old.
Posted by Bookphilia at 15:26

Only tempted? I was surprised by the destination of the link, I was. I've only skimmed your posts on Vanity Fair because I didn't want to learn too much before I had a chance to read it mysself, having bought it because of your excitement and good word. I've even kissed the cover in anticipation of all the nice things I'll find in the book. K

Okay, I was more than tempted.

I started, a romp through The Fair, and noticed straightaway the indirect address to the reader about a one Jones. Who is this Jones fellow? A former critic of some sort? A generic bloke? Who? I read the forward multiple times from sheer enjoyment. I'm glad the book numbers 700-plus pages. Bless the voluble, for they shall makepeace - dumb, I know, but I couldn't resist!