It's been a few months now since I finished graduate school and having stumbled across Peter Ackroyd's The Lambs of London, I decided to take a tentative step back towards Renaissance England to see how I felt about it.

The Lambs of London is about Charles and Mary Lamb (definitely post-Renaissance) and their discovery of an early copy of Greene's Pandosto (written in the heart of the Renaissance and a fine read); this book leads to the Lambs developing a relationship with a young book-seller named William Ireland.

What hooked me when I saw this in the library was the presence on the front and back covers of secretary hand, a style of writing from Shakespeare's era (and before). Here's a larger picture of some writing in this hand: 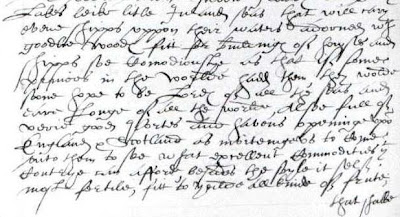 Beautiful, isn't it? It makes our post-modern scrawling look like the work of mentally challenged 10-year olds. Of course, not everyone in the 16th century and beyond knew this hand - it was a mark of a certain level of education, and almost exclusively the mark of a boy's education.

But I digress. The reason it excited me is that I know how to read secretary hand, having worked as a research assistant back in the day for someone working on 16th- and 17th-century letters (the real things, as opposed to the representations in plays of letters I worked on). I figured this book, citing as it does Pandosto as central to its action, would be all about olde Renaissance bookes which I can't resist (e.g., I just stole a book from the store called Four Jacobean Sex Tragedies. Yay!).

SPOILER ALERT!
And The Lambs of London kind of was about olde bookes, but Pandosto was a red herring if ever I saw one. The novel was actually about Ireland's discovery of a bunch of papers, including two plays, written by Shakespeare that no one knew existed.

Apparently Ackroyd didn't know of Chekhov's maxim that if there's a gun it must be fired, for Pandosto was used in the flimsiest of ways and only to get the Lambs to become acquainted with Ireland (all real people, who didn't know each other the way Ackroyd has them know each other in this novel).

Young Ireland, so the story goes, becomes randomly acquainted with a rich widow who through Ireland's careful eye discovers she owns one more house than she thought. To reward him, she lets him have all the papers in the newly found house, which just happen to include a letter, a will, and two plays written by Shakespeare. Everything begins to unravel when Shakespeare's "new" tragedy is laughed off the stage after only 6 days.

Yes, Ireland has been forging like mad, possessing as he does a particular talent for writing in secretary hand and making paper look old. Sounds like a good story to me, but there were several problems with this book which have led to me thinking of it as an effort deserving only of a gentleman's C.

First, artificially bringing the Lambs and Ireland together was just that - too artificial, and it didn't add anything to the story. If anything, it distracted from what should have been an interesting study on the life and mind of a notorious forger by suggesting that Mary's real-life madness was brought on by her love of this dishonest young man. Could you have been less original, Ackroyd? That whole woman goes insane for love thing is really old and not in the good way (which is spelled "olde").

Second, I'm not sure who this book is really written for. I feel as though anyone who knows anything about either the Lambs or Shakespeare won't like it for the ways Ackroyd plays fast and loose with the facts but not in exciting ways (really, what was the point of having Mary die before Charles does in the novel, when it was the opposite in real life?). Indeed, knowing anything about Shakespeare means you likely won't be surprised to discover Ireland is a forger - and yet, that's the only potentially exciting thing about the book as it stands that I can think of.

Third, the writing was just fine, but it was fine in that workmanlike way, not in that interesting way. It didn't offend but it didn't inspire either.

It may seem as though I hated this book, but I didn't. It was, as I've said, a gentleman's C; good enough, but not taking any compelling chances or making large gestures, and too distracted by trying to make characters who didn't need to come together.

Le sigh. I really didn't think I was picking another letdown here. The only thing to do is to read some famous Victorians or Russians next (after Watchmen, which hubby is insisting I read before we see the film).
Posted by Bookphilia at 13:10

Oh do read Watchmen! Please! And then do see the film! Both soooo good.

Re Ackroyds work: I read his biography of Dickens which I found very interesting - but a little frustrating. I hate biographies where the writer neglects to tell you the years in which the events happen. Particularly if you're trying to use it for research time and the bio is hopping backwards and forwards in time. ARGH!

Halfway there - I have finished the book!

That Dickens biography *does* sound frustrating. I may be overly skeptical but unless every single claim is footnoted I doubt the veracity...which may be why I haven't enjoyed reading biography.

I love reading biography because it contextulises a time for me. Gives me the 'what did they have for tea/think of thier neighbours' moments that I crave.

After you've seen the Watchmen movie, come over, check out my review and tell me what you thought yourself ... I feel very alone in the world because I loved it. (utterly delighted that you loved the GN so much! I'm such a jibbering fangurl of it, me!)