Year-end wrap-up, or, the ghost of Bookphilia.com future

I may not be counting my books anymore, but I sure am aware of the time – two years ago today, I started this blog. Happy anniversary to moi! Let's raise a glass of sparkling grape juice to celebrate. 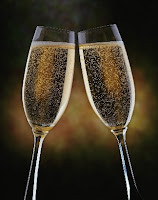 Bookphilia.com has been very enjoyable to create and has only become more so as I’ve figured out more clearly what I want to do with it and how I want to do it.

It turns out that reading entirely randomly isn’t as appealing or stimulating to me as it was when I was doing so only between reading for graduate school, where the reading, while I for the most part chose it myself, was still very narrowly focused in terms of both subject matter and context (i.e., original language, country of origin, time period).

I actually miss the order of reading in a university-like fashion. I miss the pleasure of delving into a single time period or author or even theme (e.g., about a hundred years ago, I took a great graduate course called Early Modern Privacy) – I miss feeling like I’m learning something.

Having finished school, I’ve been wondering how I can replicate some of its strictures for myself, in a way I’ll find engaging. Many ideas have come and been shelved and what’s stuck is an idea based on what I don’t know. Of the literatures of all the world’s so-called great nations, it’s French literature I know the least about (although German lit would be a very close second). I’ve read a few things – Madame Bovary, The Stranger, The Plague, Guy de Maupassant’s stories – but it’s definitely a gaping hole in my world literature knowledge.

So, this is my plan: I’ve created a long-ish list of French literature, beginning in the Middle Ages with The Song of Roland and ending, quite arbitrarily, with J.M.G. LeClezio, who won the Nobel for literature last year. I’m sure there are gaps but I’ll fix things as I go along. More on my self-education in French literature (at best to be only a partial education, no matter how much I read, as I’m reading it all in English translation) soon.

Before I can begin this years-long project, however, I’m going to finally be turning my blog into a 3-column blog; my French book list will take up one whole column either to the left or right of the posts, and the other will likely have much of what I already have – blog links, etc. Since I’m changing up so much, I might change my title photo as well, even though I’m quite fond it. All of this will happen in the next couple of weeks when I have more time to sit down with Blogger.

But I should be saying something about the past year instead of harping so much on the ghost of Bookphilia.com future. Having abandoned the book counting, I have no statistics to offer. I will say that I really like the new feature I introduced last year, The Reading Lamp, and have one or two more on the way. I also introduced but then saw the premature death of Curious/Creepy, having moved to an apartment that’s so conveniently located that I never have the opportunity anymore to take transit and spy on people’s reading. Finally, I will soon be introducing an occasional feature about my life as a bookstore owner.

The Best Books of Blog Year le Deuxieme (in no particular order)
A Tale of Two Cities by Charles Dickens
The Velveteen Rabbit by Margery Williams
The Rachel Papers by Martin Amis
Pamela by Samuel Richardson
number9dream by David Mitchell
Confessions of a Mask by Yukio Mishima
Life in Cold Blood by David Attenborough
Out by Natsuo Kirino
South of the Border, West of the Sun by Haruki Murakami
Snow Crash by Neal Stephenson
The White Darkness by Geraldine MCaughrean
The Black Book by Orhan Pamuk
Skellig by David Almond

The Worst Books of Blog Year le Deuxieme (in no particular order)
Our Fathers by Andrew O’Hagan
Invisible Cities by Italo Calvino
Snakes and Earrings by Hitomi Kanehara
World War Z by Max Brooks
In the Miso Soup by Ryu Murakami
Grotesque by Natsuo Kirino
The Book of Three by Lloyd Alexander
The Light of Day by Graham Swift
Naomi by Junichiro Tanizaki
Mishima: A Biography by John Nathan

The good news here is that my list of least favourite books is complete whereas my list of favourite books had to be trimmed considerably so that I wouldn’t make this insanely long post too much more unbearable. I read many more good than bad books this year! Here’s to another year of reading many more kick-ass than shiteous books!
Posted by Bookphilia at 12:23

Congratulations on your "anniversary." I understand and share your preference for structured reading plans. Perhaps my tendency to prefer a schedule for reading comes from my profession since I am requiring students to read selections that have been arranged according to a semester-length syllabus. Readers who prefer a goal-oriented game-plan for their reading have quite a few gold mines for inspiration in the blogosphere. Your excellent blog, like others, gives readers a forum in which they can exchange ideas about good and bad reading experiences. As an example, your list of "best books" allows me to expand my horizons and consider books I had not previously considered; at the same time, your "worst books" list serves me well as a caveat emptor. Thank you for sharing your experiences.

Congratulations on sticking with your blog for two years!

You're French themed reading sounds interesting, I look forward to your list as it's not a literature I've read widely.

I'm glad to see A tale of two cities,The Rachel Papers and The black book included on your best reads list, as they're all firm favourites of mine.

I'm sorry you didn't like Invisible cities,but would recommend If on a winter's night a traveller before giving up on Calvino completely.

Yes, congratulations. The French specialty is a great idea.

Happy 2nd blogoversary! I have only been reading Bookphilia for a few months but it has been a most wonderful trip...from your dissertation days to the bookstore bits and to witnessing your journey as a reader. Here's to another year of reading and blogging.

I've put the Song of Roland on hold at the library so my French literature will start soon, even though I've come up against an unexpected roadblock in my plans to switch to a three-columned blog.

Sarah: I've tried If on a Winter's Night a Traveller several times and just couldn't get into it. I'm afraid I've already had to give up on Calvino. :(

Love love love your french literature self-study plan! I've got a French Connection list going, but those are books about France, not necessarily by a French author. I look forward to reading about your progress.