I am a brother to dragons, and a companion to owls

This is not the cover of the copy of Watchmen that I finished reading this morning. This cover is the one I'm seeing everywhere now, both in bookshops and clutched in people's parka-clad arms. (Yes, it's still cold enough to require a parka here. Gah!)

The copy I just finished reading is from sometime in the 80s, when the Watchmen comic books were first bound together as the Watchmen graphic novel. I have to say, I think that the earlier cover was way more kick-ass than this one is. The one I read showed the bloody, broken, high rise window of The Comedian's apartment right after he's been tossed from it. A little more evocative, for me.

Watchmen is stunning for its complexity and depth; hubby told me this was the case, but I still wasn't prepared for the extent of its complexity. It was really forward-thinking in its consideration of what constitutes "too far" in striving to serve a greater good, in nations' contributions to environmental devastation, and in how marketing is an effective tool for both taking over and controlling the world, to name just a few of the gigantic - and disturbingly current - issues tackled here.

And on top of this, it was just a damned good story and the art was pretty great, I think. I say "I think" because comic book art is something I can't comment on with any credibility. But I liked it. It was purty, disturbing, visceral, and dreamy in all the right places.

And now I can go see the film, which I've heard really mixed reviews about and which my husband refuses to listen to, plugging his ears and yelling "LA LA LA LA LA!!!" if anyone tries to discuss it in his presence. Looking forward to it but have to bring pee bucket. Film three hours long. Why writing like Rorschach speaks? Hurm. 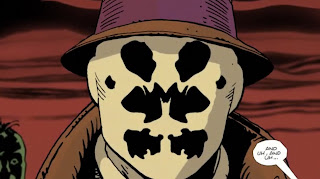 What I liked best about Watchmen, I think, was its incredibly terrifying and non-Hollywood ending (which I won't reveal here). There's no neat tying up of the action and certainly no comfortable moral conclusions espoused to make anyone feel better, not even the perpetrator of the horrors. It's messy and the stuff of life-long nightmares. I hope the director/scriptwriter of the film had the cojones not to soften and dumb it down for movie-goers. I'll post my thoughts on the film once I've seen it.
Posted by Bookphilia at 11:14