Curious/Creepy: is this really the most wonderful time of the year?

It's that time of the year, the time of the year during which you can't go anywhere without hearing that all Mariah Carey wants for Christmas is YOUUUUUUUUUUUUU!!!!!! I know. I just threw up in my mouth a little too. But don't worry, it's almost all over. And you got good books for Festivus, didn't you? I sure did! I got Orhan Pamuk's new novel, The Museum of Innocence from my seeester; Michael Slater's new Dickens bio from my bruther; hubby gave me Qian Zhongshu's Fortress Besieged for our wediversary, which is close enough to Festivus for the purposes of this braggy prelude; and then for Festivus proper hubby got me a lovely book about Japanese art. Woot! All these things made me do the opposite of throw up in my mouth.

But this isn't why I'm here. You see, the other thing about this time of the year is that people have other people over for festive festivities. And for me and hubby, this means taking public transit. Ah, love - nothing says peace on earth and good will towards men like spying on cranky readers, so here are the few books I managed to effectively ferret out yesterday on the west-bound Queen streetcar. (Sadly, I only managed to espy 5 books. The streetcar was a veritable cornucopia of reading crankies but the car was so crowded that I was forced directly to the back and couldn't make out even half of the books I saw. I waved my kerchief tragically at them as I went by, but because this is Toronto, the readers steadfastly avoided mine tear-filled eyen and sincere salutes.) 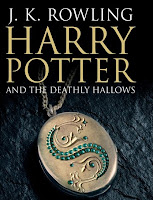 I'm honestly a bit surprised that every Curious/Creepy to date hasn't just been about the Harry Potter books. J.K. Rowling is so rich she's probably going to buy the British government and make herself queen soon.

Prophesying aside, this book was being perused by a very gangly teenage boyo who was wedged in against the window by a mysterious object with much shorter legs and no respect for the damage this kid's knees must have been suffering. This reader's wrists are the kind of wrists that stick out from all jacket and shirt sleeves because the arms are a shade too monkey-like in their excessive length. You know, the kind of teenage boy wrists that look like they'll snap under the weight of their idiot-string secured mittens, never mind the massive tome that is The Deathly Hallows installment of the Harry Potter racket.

God bless him, he was trying to get comfy so he could read like a good boy but there was simply no room. Looking at him, I remembered how I felt squished into a Korean Air flight for 15 hours of turbulence so bad we weren't allowed to get up, next to a snoring ajuma, and with less than the usual amount of leg room because of the wheel casing (or something) being underneath my seat; I ached inside for him but turned away looking indifferent because this is Toronto where being nice will get the cops called on ya.

But really, I had no choice. As mentioned above, I was being forced to the back of the streetcar, wading through a forest of trees made of puffy gortex angels. Ha. Next to be spotted was Lynn Coady's Saints of Big Harbour which I've never heard of but I'm guessing this Coady woman is Canadian because she's spelled "harbour" correctly in her book's title.

I have no idea about the reader of this book. Besides being bundled to the max, he/she/it was hunched over the book as though it were a crystal ball revealing dark things. If this book is from Canadia, as it appears to be, I'm going to guess, based on its title, that it features some hard-drinking men and some long-suffering women; a terrible life eked out on the rocky shores of the east coast where feeling good and making money means you've gotten above yerself; that reading this book will make you cold, so cold, because the damp atmospheric mood will be so intense that you'll have to wear a raincoat even if you're reading it on the beach in Florida, where east coasters go in January to escape the ever-living hell that is their lives, and also because going to Florida in January is super-cheap and there's Tom Collinses to be imbibed by the bucket-full.

Next on the whirlwind tour to the back of the car I noted Frank McCourt's 'Tis, the sequel to Angela's Ashes; if you somehow haven't read Angela's Ashes, it's like my plot summary of Saints of Big Harbour minus the happiness, money, and Florida bits.

I haven't read 'Tis. But really, I don't know why McCourt, gawd rest his soul, wrote this one - what, really, is there to say after you've described sexing up a girl dying of the consumption? That's straight gangsta.

Seriously, I enjoyed Angela's Ashes very much and think it makes perfect sense that everyone who's 1/32 Irish wants to go back to the motherland and get in touch with their roots.

In the back of the streetcar, where I quickly found myself trapped, I spotted 2 books being read. The first was being perused by a lady sitting directly across from me. She was deep into a library book, and it was a well-thumbed hardback copy of Kate Atkinson's Case Histories. For a change, I was actually able to see the person doing the reading and I have to say, I've never seen so many brown items of clothing on one person. Brown hat, coat, pants, boots, bag, glasses, mittens, scarf, EARRINGS!. All brown.

It takes a superfine glam diva who's about eight feet tall, possessing naturally red hair, and an attitude that would make Billy Bob Thornton whimper and lay down on the floor the minute she walked in the room to get away with that much brown and this lady weren't said diva. Not that the rest of us puffy angels in our sleeping bags with sleeves and hoods attached were looking any sexier.

And finally, there was Ken Follett's The Hammer of Eden. This one was in the hands of the most under-dressed person on the streetcar - while the rest of us were cursing the accident that placed us in Toronto and not Fiji (it was -25C with the wind last night! - the interwebs tell me this is about -13F), she was bare-headed, bare-handed, and indifferent and she plowed through her extremely abused paperback. I like me them abused paperbacks. There's something satisfying about being able to bend a book into unnatural shapes while you're reading it; it's just that I can't be the person to abuse it in the first place.

But about Follett: what's the deal with this guy anyway? If you went into a bookstore, would you expect to find his stuff in fiction or lit? Because this cover looks a lot like the kind of book that involves serial killers who cut people up and save their organs in their deepfreezers for special occasions. (Oh, with a little bit of religious horror a la The Seventh Sign or Legion thrown in, for good measure. Nothing says Festivus like body parts in the deep freeze and god breathing angrily down your neck!) But then hasn't he won some schmancy award for The Pillars of the Earth? And hasn't he been Chosen by Oprah who, while I don't like her taste generally, goes more for the lit than the mass markety fiction stuff?

Alright, so I didn't give you my best Curious/Creepy work for the holidays, what can I say? I'm going through sugar withdrawal and feel a leetel bit crazy right now. Also, I'm reading Dostoevsky which makes me want to throw myself on people's necks and be deep and dramatic and repentant, not witty and erudite and cutting. Maybe next time?
Posted by Bookphilia at 21:18

I like this idea for a post. I feel like I should have paid closer attention while in the airport today to see what was being read around me.

I am jealous of that kid reading the Deathly Hallows. I remember being that young and gangly and TOTALLY into books. Like zomg.

I never seem to notice what people are reading on the train... Oh wait, that's because I'm too busy reading myself ;)

Of course, I mean that I'm reading a book. Not myself. I don't have novels tattooed across my arms. That would be weird.

Haha. This made me smile and read a little bit like stream of conciousness poetry, too.

The awesome. I want a Tom COllins.

This post series is so fun: just the right balance of invasion and erudition. You've definitely discovered one of the upsides of mass trasit.

Oh goodness, how you made me laugh! I always try to see what people on public transit are reading but for some reason in Minneapolis people hold their books low making it hard to see the title and it really would be creepy if I bent over their shoulders to get a better look.

I didn't know Pamuk wrote a new book! Woot is right! I want to read some more Dosteyevsky, too. So glad to blog with you, Colleen, and looking forward to much more in 2010!

Christy: I've done the airport thing because there are always a tonne of people reading...but somehow I never feel like writing a C/C about it. Maybe it's because airports are such horrible places. I hates them!

heidenkind: your zomg made me lol.

Tony: That tattooed book thing sounds like a great idea for performance art...but someone else, not me.

Stefanie: You're clearly not committed enough to the Creepy half of the Curious trifecta minus one. Being a stalker, albeit briefly, is half the fun!

dolcebellezza: Yes, a new book. Apparently when Pamuk was at the International Festival of Authors here, he showed up late to his own reading and entered through the front door. He was yelled at for butting in line by people waiting in line...to see him. I bet he's quit Canada for good over that.