I finished this novel this morning and have been feeling rather sad and thoughtful ever since, in part because it's over and I really didn't want it to end. But the book itself feels sad and thoughtful, in spite of its mostly happy ending.

I was about to assert that this novel feels much different from any other Dickens book I've read but I realize that every Dickens book has felt different to me, in spite of all the clearly Dickensian characters and moments and observations they all boast. I think with David Copperfield I'm beginning to see just how varied Dickens could be within the (imagined? by modern readers?) confines of his very recognizable writing style.

This will be news to no one, likely, but my understanding of the Victorians is fuzzy and warm and quite vague. I've always imagined that as in no other era, the authors of the Victorian period were simultaneously for the "feeling" readers and the "thinking" readers; both for the common, minimally educated folk and the privileged owners of libraries, etc. (to break Victorian England, quite erroneously, into only two distinct social classes). Based on this likely ludicrous construction of the period, I thought Dickens was rather more for the touchy-feely types - which with him, I had/have absolutely no problem with, no matter how much I mock such tendencies in contemporary fiction writers.

David Copperfield was written in the first person, as the memoir of an established novelist, and apparently presents a number of parallels to Dickens's own life. If ever an emotional gush-fest were likely to occur, this would be the novel for it; and yet, this book is much, much quieter than the last Dickensian emotional explosion I read (A Tale of Two Cities) and is indeed, very pensive and introspective. 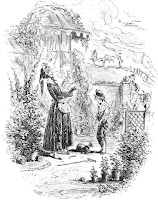 Not that there weren't happenings, and pain, and love, and death, and disaster! everywhere in David Copperfield, because of course there were. But this novel looked not so much at a specific social problem rooted in some form of injustice, but rather at what may be the most pressing social problem going: how to create family, both filial and friendly, out of nothing. The difficulties and pitfalls of the attempt, the ongoing heartaches, the mis-steps, the losses - but also the surprising things that become possible when you start at zero and have nothing left to lose.

Speaking of starting at zero so that the impossible might become less so, here's a drawing (by Phiz, of course) showing young Davey presenting himself to his Aunt Betsey Trotwood for the first time.

For a real review of the book, check out what Tony has to say here.
Posted by Bookphilia at 16:24

I think you've got it exactly right. The Victorians - not just the Victorians, though, but novelists throughout Europe and the U.S. - were learning to use this powerful new tool that was only just beginning to be understood. The period really was different, in just the way you describe. That's what I was trying to get at back here.

Amateur Reader: I recall quite enjoying your posts on sympathy as a literary device; I can't believe I didn't even think to refer back to them. :(

I'm glad I wasn't imagining things, in any case, for my ideas are based almost entirely on reading approximately 20 Victorian novels in total. That doesn't really seem like enough to base any kind of hypothesis on.

Well, there were things like penny dreadful novels and other low-brow literature, wasn't there? I honestly don't know much about Victorian literature, unless said writer hung out with famous artists. =/

Every time I encounter people reading Dickens, I get a little queasy. All I've read is "A Tale of Two Cities" and I don't remember much from it, other than liking it without loving it. This means that people gushing or ranting about Dickens always makes me want to hide under some bed or other... If only I could add to the discussion in any productive way and say something clever and witty!

I haven't read that one in too long. Maybe that's a good holiday project for me--though there's other Dickens I've never read at all, so maybe those should come first...

Have you read Nick Hornby's The Polysyllabic Spree? It was recommended to me some time ago by a student who thought I would appreciate the love affair Hornby has with David Copperfield...and I did.

Dickens is one of those writers I love without having read much of their work. Some short stories and 3-4 readings and re-readings of Great Expectations. My husband just finished this one a couple months ago and loved it. I've got to get with the Dickens reading so when I say I love him, I can support it with more than one book and a few short stories!

I read A Tale of Two Cities two years ago, and Great Expectations last year, so I'll really need to pick this up for this year. I like Dickens, but I don't get around to reading as much of him as I ought.