Final and incomplete thoughts on Little Nell's tale of woe

I finished reading The Old Curiosity Shop ages ago; moreover, I wrote the post below ages ago. What can I say? I sit at a desk all day at work and don't want to do so at night, at home. It was especially impossible to contemplate blogging last night, for example, when my options were: 1) Sit on my expanding office ass some more, or 2) Go look at the cherry blossoms in High Park. Guess which one I picked, and how easy that decision was.

What follows marks the last of my thoughts on The Old Curiosity Shop, as incomplete as they are. I'm 330 pages into Martin Chuzzlewit, have written two thus far unposted pieces on it(!), and have both begun and completed a re-read of Jonathan Safran Foer's Extremely Loud and Incredibly Close. I'm not sure how I'm going to get caught up. I do know that I've challenged myself to finish Martin Chuzzlewit before going to my beloved Kingston on May 20. Can I read 420 pages in 10 days, while working full-time and exercising every day? Let's find out. Feel free to give me good pep talks! 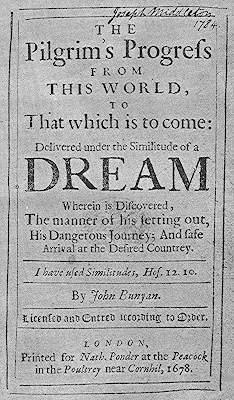 Dickens makes almost countless references in The Old Curiosity Shop, both direct and oblique, to John Bunyan's 1678 novel/religious meditation The Pilgrim’s Progress. That Nell is both engaged in a pursuit for something higher, and infuses the struggles of those around her with spiritual meaning, isn't what's fascinating about this literary homage; Dickens could have done this either with or without reference to Bunyan. It’s the basic structure of the two works that makes Dickens’ use of this popular religious text most interesting to me.

In The Pilgrim's Progress, Everyman engages on a long, wandering journey, during which he meets with all kinds of personified obstacles and aids on his way to ultimate salvation. The Old Curiosity Shop follows an obviously similar structure but the question is – is it Nell or is it her grandfather who stands in for Everyman here? On the one hand, Nell seems entirely too good to be Everyman – she seems rather more like Help extending her hand unfailingly to all, including Everyman.

Grandpa Trent is certainly chock-full of enough base human failing to make a good everyman; he is not, however, capable of learning or changing from his experience the way Everyman is and needs to be. Grandpa, after a life of excessive emotional loss, an apparent tendency towards blind selfishness, and a debilitating brain fever, is no more than a child in need of constant care and will never be more than this again. What then of their respective destinations?

Plot Spoilers
Nell certainly attains salvation. Her last days are spent as the caretaker of a church, where she spends hours in quiet reflection, and in her new community helping others. Further, her goodness is not only celebrated, but is also so profound as to inspire others to be better than they are (her grandfather’s back-sliding into destructive gambling notwithstanding). She dies, of course; she's positively famous for her dying and the wretched pain and unfairness of it. (She's so good, and only 14 or so.) Granddad soon follows her, being absolutely helpless without her - but salvation, glorious salvation? I don’t know. He’s buried in consecrated ground, yes; but the kind of repentance, self-awareness, even full comprehension of his current reality (he awaits Nell’s physical return until he dies) - these he never even approaches, much less achieves. Union with God is never in question for Nell, while her grandfather’s seems incomplete because he's so feeble-minded.

But these two, even though they are the novel's heroes, aren’t the only wanderers. I’m thinking of the so-called "single gentleman," a character left unnamed for the majority of his time with us. We are never told his given name, and we only learn that his surname is Trent because he confesses to being Granddad’s younger brother almost at the novel's conclusion. He is identified but he is not socially claimed by having a name firmly affixed to him until it is too late. He spends most of the novel wandering, mostly in thought but also in body, looking for his lost relatives - and when he does find them, union is completely denied him as Nell is already deceased and his brother refuses (out of incapacity, rather than malice) to acknowledge him. He has nothing left to do but continue wandering, which he ends up doing alone because the kind schoolteacher declines his offer to travel with him.

The Old Curiosity Shop has two kinds of wanderer – one whose salvation is never in doubt, and another whose journey isn’t ultimately either convincingly rewarded or invested with any meaning. Dickens uses his 17th-century Bunyan's tale earnestly and energetically but then rejects his source text’s ending, leaving his primary seekers without closure. And this lack of comfortable closure applies even to Nell who, for all her Christian resignation to her fate, still very much wants to go on living.

Is Dickens suggesting that life is all sound and fury, signifying nothing? No, I don't think so. I think, rather, that while Dickens's narrator refers quite straightforwardly to God, his primary interest in Him is in how He is manifested in daily life – i.e., social interaction, and familial and friendly relationships are absolutely the mark and measure of God in everyday life, and the only thing about God that may actually really matter. This would explain why only Nell has a modicum of peace at the end of her journey; she focused on helping the Everymen around her rather than being one. The single gentleman seems similarly committed to helping others, but after too long a time away, he learns that sometimes you can't go home again - and there's no home to go to anyway, and hasn't been for generations. For Dickens, it seems, references to God aren’t theoretical – they are either practical and immediate or they’re meaningless.

I realize that my blogging in the post-bookshop, post-unemployment world is rather scattered. I seem to be noticeably lacking in conclusions, or even gestures towards conclusions, most of the time. This isn't what I prefer but it's what I seem to be able to do right now.

And yes, I absolutely loved The Old Curiosity Shop. I frankly don't get why some people complain about it. It's a Dickens novel! It's supposed to be absurd, hilarious, and make you cry, sometimes all on the same page!
Posted by Bookphilia at 21:19

It is absurd and it is hilarious. Isn't that how Dickens writes?

I have to say that when I read this several years ago, I may have actually cheered when Nell died. I know that sounds awesome, but she was just too good and too saintly throughout the book. She almost became irksome.

I loved the book too, though, I also love Dickens.

Good luck with your busy schedule! You can do it!

It's true that long-suffering-ness of this calibre is associated in this day and age with passive aggressiveness and a need for therapies of a particular sort. I found myself becoming impatient with her too - but really, she had no other options. It's just hard to imagine a child with so few options I guess, although I'm not sure why.

Thanks for your confidence in my ability to maintain my blog...I hope you're right.