There is a much higher justice than poetical justice 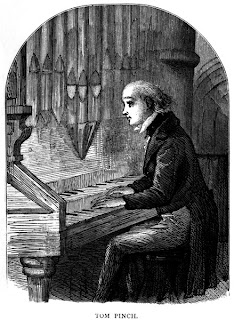 Martin Chuzzlewit is a novel about two characters named Martin Chuzzlewit; it is also a novel with two endings tacked one on top of the other, but I will save my thoughts on these strange dualities for another day.

Right now, I want to discuss Martin Chuzzlewit as a novel about a fellow named Tom Pinch. Tom is five and thirty years of age or so, not very handsome, not moneyed, not showy, and not successful in any conventional sense. He is, however, the novel’s impossible and idealized moral centre. That the novel's moral centre is not only not one of the Martins, but also not one of the many characters related to the two Martins, seems to confirm Dickens's gentle condemnation of the whole degraded lot discussed in my previous post. So, who is Tom Pinch, and what is he doing in the middle of this mess?

Tom is the laughably gullible assistant to the rapacious but gold-plated Mr. Pecksniff (cousin to the elder Mr. Chuzzlewit). Everyone but Tom can see what a scoundrel his employer is. Indeed, Tom not only cannot at first see Pecksniff’s severe moral failings, but he also venerates his boss to such a degree that he believes his otherwise lovely friends (particularly John Westlake) to be smitten with a peculiar moral blindness in relation to the man, when they try to warn Tom that he’s been taken advantage of.

Tom seems earnest, innocent, and trusting, all to an almost fatally extreme degree, but finds out how wrong he’s been about Pecksniff in a singularly painful fashion which I won’t reveal here. What matters is that his disillusionment doesn't change him.It hurts him, yes, and deeply, but he remains impossibly and endearingly good. Impossibly good and endearing characters are hardly rare beasts in Dickens's human menagerie, of course; what strikes me in particular about Tom is how Dickens highlights Tom’s love of books alongside his goodness. It’s not simply that Tom loves to read and is referred to as constantly doing so; it’s that he loves books as passionately as he loves people; bookstores are as holy to him as his beloved church organ and the object of his unrequited human love. Tom's devotion to books is first revealed in a rare trip to the shops in the bustling metropolis of Salisbury:


But what were even gold and silver, precious stones and clockwork, to the bookshops, whence a pleasant smell of paper freshly pressed came issuing forth, awakening instant recollections of some new grammar had at school, long time ago, with 'Master Pinch, Grove House Academy,' inscribed in faultless writing on the fly-leaf! That whiff of russia leather, too, and all those rows on rows of volumes neatly ranged within--what happiness did they suggest! And in the window were the spick-and-span new works from London, with the title-pages, and sometimes even the first page of the first chapter, laid wide open; tempting unwary men to begin to read the book, and then, in the impossibility of turning over, to rush blindly in, and buy it! Here too were the dainty frontispiece and trim vignette, pointing like handposts on the outskirts of great cities, to the rich stock of incident beyond; and store of books, with many a grave portrait and time-honoured name, whose matter he knew well, and would have given mines to have, in any form, upon the narrow shell beside his bed at Mr Pecksniff's. What a heart-breaking shop it was!

There was another; not quite so bad at first, but still a trying shop; where children's books were sold, and where poor Robinson Crusoe stood alone in his might, with dog and hatchet, goat-skin cap and fowling-pieces; calmly surveying Philip Quarn and the host of imitators round him, and calling Mr Pinch to witness that he, of all the crowd, impressed one solitary footprint on the shore of boyish memory, whereof the tread of generations should not stir the lightest grain of sand. And there too were the Persian tales, with flying chests and students of enchanted books shut up for years in caverns; and there too was Abudah, the merchant, with the terrible little old woman hobbling out of the box in his bedroom; and there the mighty talisman, the rare Arabian Nights, with Cassim Baba, divided by four, like the ghost of a dreadful sum, hanging up, all gory, in the robbers' cave. Which matchless wonders, coming fast on Mr Pinch's mind, did so rub up and chafe that wonderful lamp within him, that when he turned his face towards the busy street, a crowd of phantoms waited on his pleasure, and he lived again, with new delight, the happy days before the Pecksniff era. (pp. 68-69)

This is the kind of intense, almost pained love for books that I think only a true bibliophile can comprehend. I get it; I feel it constantly and I know probably most of you do as well. I initially thought this passage was meant simply to establish Tom’s mental and emotional distance from reality, that his inability to see others clearly was simply part of a larger tendency towards dreaminess and disconnection.

But Tom isn’t really disconnected, except in the one instance of Pecksniff; indeed, he’s infinitely more observant of human failing (except in relation to his boss) than others are; the real difference is, he is much more forgiving than anyone has a right to be. Because he doesn’t complain or reproach others, they believe he doesn’t see them for what they are.

Dickens begins revealing this unexpected depth in Tom's character when he begins making his way to London to seek his fortune. The first he does upon arriving in London-town is collect his sister Ruth from her own untenable employment situation. They set up very modest house together but Tom doesn’t know what he’ll do, but knows that if they’re to survive, he must find gainful employment, posthaste.

Dickens is so often unrelenting in his destruction of his kindest and best characters that I was certain Tom’s time in London would be short, brutal, and result in his and/or his sister’s tragic demise. But no! Before he even manages to write an advert for himself, Tom is offered a well-paying job organizing an incredibly large personal library. Tom is not simply not made to suffer very long for his blindness about Pecksniff, he’s actually rewarded for it by being offered a job that simply couldn’t suit him better. He spends his days organizing, cataloging, and repairing the thousands (!!!) of books his mysterious employer has left for him to handle:


Tom attended to his duties daily, and made considerable progress with the books; which were already reduced to some sort of order, and made a great appearance in his fairly-written catalogue. During his business hours, he indulged himself occasionally with snatches of reading; which were often, indeed, a necessary part of his pursuit; and as he usually made bold to carry one of these goblin volumes home at night (always bringing it back again next morning, in case his strange employer should appear and ask what had become of it), he led a happy, quiet, studious kind of life, after his own heart. (p. 567)

It seems that Tom, simply for being incredibly good, gets to make a living doing the very thing he adores most; in recompense for having his greatest illusion stripped ruthlessly away, he gets to be entirely and perfectly himself, all the livelong day. It’s the ultimate fictional fantasy that we all crave, but which most experience only when reading. Tom, it seems, is the ultimate fantasy of good being rewarded for being good - and up to this point, the fantastic is the dominant mode; never has Dickens seemed less allied with the realism of his French counterparts than in his construction of this character's life!

But Tom is not simply a cipher of goodness made to stand in sharp contrast against the Chuzzlewits' degradation of character; neither is he a literary mannequin set up to represent Dickens's romantic love of literature (although it is probably both these things). For Tom, you see, has no illusions about his chances of winning the heart of the woman he loves, and how he acknowledges this hopelessness to his devoted sister is telling:


`You think of me, Ruth,' said Tom, `and it is very natural that you should, as if I were a character in a book; and you make it a sort of poetical justice that I should, by some impossible means or other, come, at last, to marry the person I love. But there is a much higher justice than poetical justice, my dear, and it does not order events upon the same principle. Accordingly, people who read about heroes in books, and choose to make heroes of themselves out of books, consider it a very fine thing to be discontented and gloomy, and misanthropical, and perhaps a little blasphemous, because they cannot have everything ordered for their individual accommodation. Would you like me to become one of that sort of people?' (p. 700)

Tom is dreamy and naive, but among the other character in this novel he also has the most unrelentingly realistic view of himself. While the Chuzzlewits fail to see either themselves or others clearly at all for the majority of the action, Tom knows the difference between books, dreams, and reality most of the time. Tom is, as the novel's moral centre, a mirror held up to the Martins by which they may measure their own worth. And both eventually feel their wont of sense and feeling in the end; but this is intimately related to the issue of the novel's two conclusions, so I'll save my thoughts on this for (hopefully) my next post.
Posted by Bookphilia at 16:55

I've been a good girl, why can't I get a job like Tom's? This sounds like a good book and you have me hankering to read some Dickens. Perhaps when I have finished Sense and Sensibility it will be time to indulge.

You're right that a job like Tom's is the ultimate fictional fantasy. I've been mourning the demise of the managed personal library ever since learned about David Hume's cushy post as a private librarian!

If you wrote a book about Dickens, I would read it. I've been enjoying these posts a lot.

Stefanie: I love that you see reading Dickens as indulging. :)

Trapunto: Thank you SO much! I was worried I was losing everyone with my long, fragmented musings on the fat Vic Lit novels as it's been so quiet around here lately...

I second Stefanie on the hankering to read some Dickens. I got a little into Our Mutual Friend before other reading took over: time to go back to it! Great posts.

Great Post! I'd seen the adaptation with Philip Franks and thought Pinch's closing speech about poetic justice vs. real life made the entire production worth watching (not that there weren't other elements which were also very good). Pinch really is the person whose name should be the book's title. Thank you again for your excellent post, including Pinch's flash of realism in this speech (which is all the more interesting since it is occurring in a person whom many of us had written off early in the story as a person unable to see glaring truth). Blindness in one area certainly does not necessarily mean blindness in general. We forget that. Great post. Thank you!