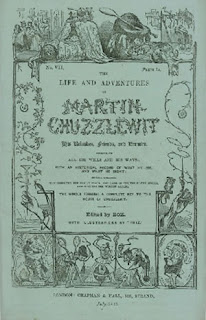 The title of Dickens’s funniest novel (so sayeth the editor of the copy I'm reading), Martin Chuzzlewit, is deceiving. It should, rather, be called Martin Chuzzlewits, for there are two of them - a grandfather and his grandson - and at this point, neither is either more or less protagonist-ish than the other. In terms of personality, they are decipherable really only by their ages. Granddad Martin is ornery, contrary, capricious, selfish, paranoid, and foolish – the grandson is the same, but sports a rather better turned calf and hasn’t yet shed all his social graces.

Young Martin discusses his grandfather with the kind and generous Tom Pinch and reveals himself as he goes:


‘In a word,’ said Martin, ‘I have been bred and reared all my life by this grandfather of whom I have just spoken. Now, he has a great many good points — there is no doubt about that; I’ll not disguise the fact from you — but he has two very great faults, which are the staple of his bad side. In the first place, he has the most confirmed obstinacy of character you ever met with in any human creature. In the second, he is most abominably selfish.’

‘In those two respects,’ returned the other, ‘there never was such a man. I have often heard from those who know, that they have been, time out of mind, the failings of our family; and I believe there’s some truth in it. But I can’t say of my own knowledge. All I have to do, you know, is to be very thankful that they haven’t descended to me, and, to be very careful that I don’t contract ’em.’

‘Well, sir,’ resumed Martin, stirring the fire once more, and drawing his chair still closer to it, ‘his selfishness makes him exacting, you see; and his obstinacy makes him resolute in his exactions. The consequence is that he has always exacted a great deal from me in the way of respect, and submission, and self–denial when his wishes were in question, and so forth. I have borne a great deal from him, because I have been under obligations to him (if one can ever be said to be under obligations to one’s own grandfather), and because I have been really attached to him; but we have had a great many quarrels for all that, for I could not accommodate myself to his ways very often — not out of the least reference to myself, you understand, but because —’ he stammered here, and was rather at a loss.

Mr Pinch being about the worst man in the world to help anybody out of a difficulty of this sort, said nothing.

‘Well! as you understand me,’ resumed Martin, quickly, ‘I needn’t hunt for the precise expression I want. Now I come to the cream of my story, and the occasion of my being here. I am in love, Pinch.’

Mr Pinch looked up into his face with increased interest.

‘I say I am in love. I am in love with one of the most beautiful girls the sun ever shone upon. But she is wholly and entirely dependent upon the pleasure of my grandfather; and if he were to know that she favoured my passion, she would lose her home and everything she possesses in the world. There is nothing very selfish in THAT love, I think?’

‘Selfish!’ cried Tom. ‘You have acted nobly. To love her as I am sure you do, and yet in consideration for her state of dependence, not even to disclose —’

‘What are you talking about, Pinch?’ said Martin pettishly: ‘don’t make yourself ridiculous, my good fellow! What do you mean by not disclosing?’

‘I beg your pardon,’ answered Tom. ‘I thought you meant that, or I wouldn’t have said it.’

‘If I didn’t tell her I loved her, where would be the use of my being in love?’ said Martin: ‘unless to keep myself in a perpetual state of worry and vexation?’

‘That’s true,’ Tom answered. ‘Well! I can guess what SHE said when you told her,’ he added, glancing at Martin’s handsome face.

‘Why, not exactly, Pinch,’ he rejoined, with a slight frown; ‘because she has some girlish notions about duty and gratitude, and all the rest of it, which are rather hard to fathom; but in the main you are right. Her heart was mine, I found.’

‘Just what I supposed,’ said Tom. ‘Quite natural!’ and, in his great satisfaction, he took a long sip out of his wine–glass.

‘Although I had conducted myself from the first with the utmost circumspection,’ pursued Martin, ‘I had not managed matters so well but that my grandfather, who is full of jealousy and distrust, suspected me of loving her. He said nothing to her, but straightway attacked me in private, and charged me with designing to corrupt the fidelity to himself (there you observe his selfishness), of a young creature whom he had trained and educated to be his only disinterested and faithful companion, when he should have disposed of me in marriage to his heart’s content. Upon that, I took fire immediately, and told him that with his good leave I would dispose of myself in marriage, and would rather not be knocked down by him or any other auctioneer to any bidder whomsoever.’

Mr Pinch opened his eyes wider, and looked at the fire harder than he had done yet.

‘You may be sure,’ said Martin, ‘that this nettled him, and that he began to be the very reverse of complimentary to myself. Interview succeeded interview; words engendered words, as they always do; and the upshot of it was, that I was to renounce her, or be renounced by him. Now you must bear in mind, Pinch, that I am not only desperately fond of her (for though she is poor, her beauty and intellect would reflect great credit on anybody, I don’t care of what pretensions who might become her husband), but that a chief ingredient in my composition is a most determined —’

‘Obstinacy,’ suggested Tom in perfect good faith. But the suggestion was not so well received as he had expected; for the young man immediately rejoined, with some irritation,

‘What a fellow you are, Pinch!’

‘I beg your pardon,’ said Tom, ‘I thought you wanted a word.’

‘I didn’t want that word,’ he rejoined. ‘I told you obstinacy was no part of my character, did I not? I was going to say, if you had given me leave, that a chief ingredient in my composition is a most determined firmness.’ (pp. 89-91)

Martin is exactly correct in his estimation of his grandfather's character, so: peas in a pod, yes? They are each so focused on their respective desires, that not only are they unable to try to conciliate one another with regards to anything at all, but they are also both mortally offended by anyone else having any desires that don't align with their own. They are domestic and social tyrants, plain and simple.

It would seem that young Martin is correct to refer as part of the problem to his plucky lineage, for unpleasant personalities boast a long genetic history with the Chuzzlewits. Note the curious manner in which Dickens begins this tale:


As no lady or gentleman, with any claims to polite breeding, can possibly sympathise with the Chuzzlewit Family without being first assured of the extreme antiquity of the race, it is a great satisfaction to know that it undoubtedly descended in a direct line from Adam and Eve; and was, in the very earliest times, closely connected with the agricultural interest. If it should ever be urged by grudging and malicious persons, that a Chuzzlewit, in any period of the family history, displayed an overweening amount of family pride, surely the weakness will be considered not only pardonable but laudable, when the immense superiority of the house to the rest of mankind, in respect of this its ancient origin, is taken into account.

It is remarkable that as there was, in the oldest family of which we have any record, a murderer and a vagabond, so we never fail to meet, in the records of all old families, with innumerable repetitions of the same phase of character. Indeed, it may be laid down as a general principle, that the more extended the ancestry, the greater the amount of violence and vagabondism; for in ancient days those two amusements, combining a wholesome excitement with a promising means of repairing shattered fortunes, were at once the ennobling pursuit and the healthful recreation of the Quality of this land.

Consequently, it is a source of inexpressible comfort and happiness to find, that in various periods of our history, the Chuzzlewits were actively connected with divers slaughterous conspiracies and bloody frays. It is further recorded of them, that being clad from head to heel in steel of proof, they did on many occasions lead their leather-jerkined soldiers to the death with invincible courage, and afterwards return home gracefully to their relations and friends. (p. 1)

Dickens’s pair of Martins are Chuzzlewits through and through, never mind that their frays be of the metaphorically, rather than literally, bloody sort. But as Dickens asserts so strenuously in other novels, family does not tout court determine personality – Amy Dorrit, Nell Trent, Oliver Twist, Davey Copperfield – they all either become or remain steadfastly better than their origins would suggest possible. They may be exceptions, mind, but exceptions that make an easy correlation between nature and nurture impossible. Dickens brings up the Chuzzlewit family history, not to either explain or condone - or even condemn, to be fair - the Martins; it’s more just, I think, to show that family is the biggest cross either has to bear but for all their sense of life as abusive towards them particularly, it's really not a very big cross at all.

Whether or not they can shoulder their relations gracefully seems to be the subject of the novel – the comic subject, it’s important to note. At least, given how hilarious this novel is supposed to be, the family chaos should likewise be hilarious. But while certain members of the extended Chuzzlewit family are buffoons, freaks, or amusing disasters, the two Martins are none of these things. Both have hurt others significantly and at the end of the first 200 pages, are poised to continue to do so: Old Martin, to wound his adopted daughter and grandson whose marriage he opposes, and his grandson to wound his fiancée and his grandfather (even if the old man's reasons for feeling hurt are ridiculous).

Neither seems to care a flying fig enough to notice that they're harming others with their refusals to even attempt to resolve things more diplomatically than issuing stern ultimatums and cutting ties. If they did notice, however, they likely still wouldn’t care, for in their respective lives, there is room for only one person – themselves. Both could easily become tragic figures, and if they don’t do so yet, it may only be because the comic milieu in which Dickens has placed them proves to be even stronger-willed - shall we say obstinate? - than they are.
Posted by Bookphilia at 19:21