I've been thinking about the relationship western society has with books as both physical and metaphysical objects, and what the connections between those two aspects might mean. These thoughts began when the following occurred: 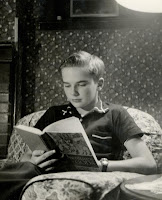 I was sitting here in the shop on Monday when a customer came in looking for books that looked like one he was using as a prop in a TV show. The book was old and so the only place he might find books that looked sufficiently like his was the rare book section. He found some - two lovely old George Eliot novels (The Mill on the Floss and Felix Holt), both published around 1902.

I have to admit that I almost didn't sell the guy these books when he told me what they were for. The original book, having become part of the show's storyline, needs to be preserved for future episodes and the episodes he needed the books he bought for needed to be disposable. Some character would be throwing said understudy books - they had to be destroyable so that the original wouldn't be. It hurt me to think about what would happen to those lovely old books but I sold them anyway for two reasons, one infinitely less respectable than the other: 1) This is a business and we need to make sales; 2) It's not my business what people do with books they own.

The latter gave rise to some musings about what responsibility individuals have to others' books. No one would argue that burning books, as in Nazi Germany, was criminal and nightmarish. The question then becomes wherein lies the crime and the nightmare. Destroying art and information is frightening for it generally accompanies other forms of destruction of human autonomy, and specifically the right to think one's own thoughts and to seek out the thoughts of others according only to one's inclinations.

The problem with destroying books though is more than losses of autonomy or knowledge, for if someone decided to burn their own books, we might be disgusted but it couldn't literally be considered criminal and we'd probably just assume the guy burning his own library was insane and keep our distance.

No, books are something other than physical property. But what are they?

1) Books are clearly (but not solely) intellectual property with many owners. Authors assert the right of ownership over the works they produce by having their names indelibly associated with their texts and by asserting copyright.

Publishers become owners insofar as they determine the appearance, print runs, market campaigns, and of course the published existence of books at all.

Readers have some kind of ownership too, for they determine whether or not a book makes it to the best-seller list or whether or not a publisher decides to drop an author; they decide who else reads what they read by recommending it or not, via reviews, word of mouth, and even just being seen reading in public.

Just as important as readers' public ownership over books is their private ownership - to buy and keep a book involves some kind of investment in the book as object that, except for the case of collectors who collect only for the sake of collecting, is not really financial at all. Some kind of relationship forms that lasts well after the book has been read. If it were just about the reading experience, there would be no reason to keep books after they've been read. And while lots of people get rid of books (otherwise, stores like mine couldn't exist), many many keep more than they can handle or will reasonably expect to read ever again.

Books then, I think, can become attachments that can't be explained according only to either their physical shapes or the mental or emotional pleasure taken in reading them.

2) Yet, the physical object matters for history attests to a rather contradictory relationship between readers and books as physical objects (and here I'm going to make some sweeping generalizations bereft of any real subtlety).

Before Gutenberg created the printing press in Europe (circa 1439), books were rare and extremely expensive. All had to be handmade and so the time and materials could could cause a book made in the Middle Ages to be worth upwards of the modern equivalent of $6,000 (this according to my undergraduate Middle English Literature professor). The contents and the object were, theoretically, of equivalent value - i.e., priceless. Books were not only informational and artistic, they were artifacts - things to be treasured as physical items equally for their beauty, their contents, and for what they testified to about their authors, makers, and readers, as well as the larger culture they inhabited.

The printing press made books much more widely available, both in terms of numbers and in terms of affordability and with that came increased literacy levels; without this change, I don't believe we would be where we are now in the western world in terms of either literacy or access to text: almost everyone can read and almost anyone can buy books, including the classics as publishers like Signet and the Everyman Library make sure that a fat Dickens novel or a play by Shakespeare need cost you not much more than $10 or so a piece.

Further, the lovely Ben Franklin's commitment to the idea and realization of the public library has ensured that those who can't buy a $10 book can still gain access to books.

So, now, the metaphysical worth of the book far outstrips the physical worth in the majority of cases and yet burning books, even a pile of abused Signet Classics, would likely make a lot of people extremely uncomfortable.

The next stage in the digital world is, of course, the digital book. A friend of mine has an iPod that allows him to read entire novels (e.g., Frankenstein) thereon and entirely by-pass the physicality that has previously defined reading. Such practices don't necessarily deny the tactile aspects and associations of reading but they certainly divorce the physical from the metaphysical to some degree. The iPod and other digital readers like Amazon Kindle are objects, of course, but the smells, sounds, and feel of reading is lost/sanitized in such an experience and I wonder what that does to the mental experience.

Based on my own reading of literary blogs, I would guess that it would very often seriously shorten the attention span. The only thing I read on the internet is the news and blogs and I very often don't finish very long pieces, especially of news. It's ironic, but with me, I need the physical experience of reading a traditionally created book to be able to lose myself in the metaphysical narrative. When I read from a computer screen, I'm always aware that that's what I'm doing; when I'm reading a good novel made of paper, I often surface after hours of involvement to become aware again of having a physical existence separate from the text.

Now, this may well be in part a generational thing; it may be that people who grew up reading from and working on computers would have as much of an involved reading experience with an iPod as I do with books. But I have to say, as someone who spies on readers in public, that I've yet to see someone really engrossed in an iBook (and I've been looking). So far, in my experience, looking over an iPod-holder's shoulder yields their music play list and that's all. When I see the digital generation (let's say anyone born around 1988 and beyond) engrossed in a book, it's in a physical book.

My theory, half-formed as it is, is that the book as physical object has its complex metaphysical associations because at heart it connotes membership in a community, and I mean a tangible physical community, unlike internet chat rooms and the like. Access to books, it seems to me, somehow functions to tie the solitary reader to his or her fellow humans. I don't think I can speculate on precisely how I think this might work, and it's certainly counter-intuitive in some ways if you've seen people reading on public transit for the activity there can seem like a shield.

But people don't usually engage with one another in such situations anyway. Perhaps reading alone is a sort of preparation for active engagement with others later? Perhaps it helps develop social vocabularies? And perhaps it can do these things better than a digital reader can because books still invoke the idea of human labour (that of writing and book-making) even though books aren't really made by hand anymore.

Anyway, it's all theory without any evidence; likely this post says only something about me and nothing about others. But I've wondered since finishing my PhD if reviews and other forms of criticism do anything buy reveal something about their authors. But that's a "thot" for another day.
Posted by Bookphilia at 11:27

Since I have started following blogs, I have enjoyed reading yours (the interviews are among my favorites). I wanted to pass on the "Your Blog is Fabulous" award to say thank you for the good reading.

If you would like to participate and pass it on, you can go here...

Like you, I cannot read anything long on the internet (your post almost lost me!). Even long briefs that I write on the computer, I have to print off to edit. I cannot imagine ever reading a whole book on any kind of computer screen.

BookPsmith - thanks for the recognition! I may compile my own awards list too. :)

Rose City Reader - thanks for sticking this post out until the end! I was only able to proof-read it once myself so admire your tenacity. I promise to write things this wordy only once every 6 months or so.