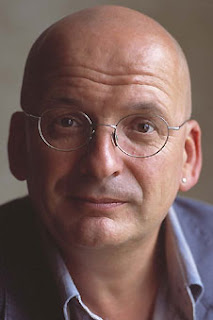 Hubby took me on a date tonight which included attending a reading by and a discussion with Irish author Roddy Doyle at a local arts centre. Doyle has a new book out, The Dead Republic, which I did not buy; it's the third book in The Last Roundup trilogy, the first of which (A Star Called Henry) I just laid my hands on (and got your man to sign tonight).

So, a reading and a signing. I'm generally rather hesitant to attend such events for fear of finding out a favourite author is a wanker, or a believer of his or her own hype, or not a good reader, or just not engaging. Without qualification, I'm happy to report that Roddy Doyle is incredibly entertaining. And he swears a lot, which I find extra endearing. His reading was pretty good; in any case, his slight rushing through it-ness in no way made the section he read seem uninteresting. On the contrary, assuming I like A Star Called Henry, I will certainly read the whole trilogy.

Two important things learned at the event: 1) He's begun a new novel which may just see what the Rabbittes from The Barrytown Trilogy are up to these days ("Squeee!", as the kidz say); and 2) He told this great story which he admitted he's probably told everyone in the world already but which I, obviously, hadn't heard before. He was meeting a friend for drinks on a Friday night in Dublin and was early, and so waiting for him outside the Tara St. (Rd.?) station when a frap of teen-aged boys walked by. One came back, and got all up in his face and asked "Are you Roddy Doyle?". He answered in the affirmative, and then the kid yelled "So what!" and walked away laughing, but then gave him the thumbs up just as he was almost out of sight. I think I should try this the next time I see either Margaret Atwood or Michael Ondaatje about town and see how likely it is that they turn it into a story with which to amuse adoring fans. I'd say less than zero.

As for the signing, it was an assembly line and in no way designed to allow for any chatting with Doyle, which I always find kind of disappointing. I saw how many people were in line, I get it; but it's still a bit of a let down. What I thought was funny about it was that someone from the theatre made her way through the line asking us if we wanted him to personalize it with our names, and if so, she'd write our name in block letters on a little post-it note for him and put it on the page we wanted signed. I told her he'd likely know how to spell my name (contender as I am for having the Most Irishest of Uber-Irish names), but she didn't believe me.

Avoidance
I likely would have blogged at some point about seeing Roddy Doyle tonight, but I'm doing so immediately after returning home because I feel a little blog panicky. I'm having a really hard time writing anything about the second volume of Phineas Finn, which I finished last week. I know basically what I want to say about it but I just can't find the mental energy to sit down and go over my admittedly not very accessible notes (because my notes comprise only page numbers references).

I'm actually having a difficult book time generally. I excitedly joined an online summer reading group for the entire, unabridged Tale of Genji (put on by The Quarterly Conversation and Open Letters Monthly) and I've read the first three chapters. But I'm struggling to focus on it already...so much so, that I might abandon it and flee with my tail between my legs. I've just begun reading Ellis Peters' eighth Brother Cadfael mystery in the hopes that a book with a set of familiar characters will help the cobwebs clear.
Posted by Bookphilia at 22:24

Sounds like a fun date night. and I am sure that if anyone could get Atwood or Ondaatje to turn a confrontation into a story it would be you ;) I very briefly thought of joining on on the Tale of Genji reading but the pace of 90 pages a week was too much for me especially since I am taking a summer quarter class at school.

I agree with Stefanie--that sounds like an awesome date! Your hubby knows how to treat a book lover. :)

I'd love to see Margaret Atwood in person...I'd probably be tempted to hug her. Sadly, I don't know of the author you visited, but it sounds like a wonderful date night all the same. My husband is not a bibliophile, by any stretch of the imagination. While he has a great many other endearing traits, among them faith and character, I often wonder why I didn't include that of 'lit lover' in my list of mental requirements. Note to self. ;)

Ah Mr Doyle! I love him.
(pssst - after while you come to bless those post-it notes; after a while you can't even spell your own damned name. (besides no-one calls their daughter Colleen in Ireland so he may have struggled a bitten with that.)

Stefanie: It was fun. I don't blame you for not trying Genji; I've already given up myself! :(

heidenkind: Yes, yes, he does. He also gets me the best books for birthdays and Xmas.

Belleza: You don't know Roddy Doyle! Celine, Celine!!! Which Roddy Doyle book should Belleza read first?? The Snapper is one of my favourites. Freakin' hilarious.

Celine: Fair enough. Why would any sane person call their kid "Girly" anyway? Damn my parents in their eyes!

Heehee. I actually like the name Colleen, me (there used to be these lovely sweets over here called Colleen Chocolates, or were they toffees? We only ever got them at Christmas.) Deffo Bellezza should start with the snapper - but maybe while also reading A Star Called Henry, which is my favourite of his?