Not end of days...but perhaps middle-to-late afternoon of days? 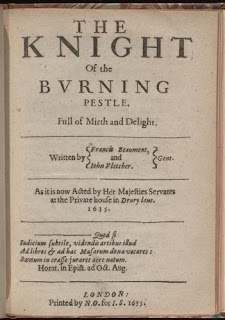 The reader's block persists; it's wearing me down in spite of all my efforts to resist. Having successfully gotten through Gaiman's The Graveyard Book, I was surprised and disheartened yesterday to find myself reacting nothing less than allergically to the other YA novels I'd picked up. I will try them again because I'm not ready to cede the win to the reader's block just yet.

Indeed, I brought out a different sort of big gun in this battle between my desires and my recalcitrant brain: I re-read another of my all-time favourite Renaissance plays, Francis Beaumont's (and perhaps, also, John Fletcher's*) The Knight of the Burning Pestle (a total failure on the stage in 1607; first published 1613).

It really doesn't get much funnier than The Knight of the Burning Pestle. Ostensibly a city comedy, the fourth wall is broken by a Citizen and his Wife within the first ten lines, and they proceed to direct the play's action till the end; their primary artistic contribution is ensuring that their grocer's apprentice, Rafe, be given a central role.

Rafe is addicted to romances and quests and his intrusions fit very awkwardly and hilariously with the fairly straightforward Rom-Com being performed by the "real" actors. I recall sitting in my little grad student office at Queen's laughing my head off while re-reading this for my comps; I also recall walking by the little grad students offices of other young Renaissance scholars laughing their heads off as they re-read this play for their comps. It's the most utterly original, charming, and gutsy thing going in early 17th-century drama.

As it's a parody, though, I think you need to read the mainstream stuff first to really appreciate it. Except for the part when Rafe delivers his death speech "with a forked arrow through his head" because the Wife has demanded that he "come out and die"; you'll love that regardless of what you do or do not know about Beaumont's (and possibly Fletcher's) contemporaries.

Now, the problem is this: I love this play. It's perfect and brilliant and if someone put on a production of it in Toronto, I'd probably have to offer to bear their child. But this reader's block is getting so bad that I had trouble getting through even this. I suppose I could just give up, and stop trying to read for awhile...but what would I do? I don't know what to do without books; that's not hyperbole - I don't know what to do when I'm not reading, not for more than an hour or two at a time anyway.

Is it the tension in the air?
I don't know, could be; I always thought of myself as a "read to escape when necessary" sort of person but perhaps that's changed. Or maybe it's just the all around weirdness of everything right now. The ongoing bookshop building drama goes on. The G20 summit is in Toronto this weekend and our shop/apartment is located directly and exactly between the official protest site and the fenced of hyper-security zone; gangs of bike cops are everywhere, looking at everyone suspiciously; the protests have begun early and I heard a fair bit of yelling this afternoon.

Then, of course, there was an earthquake here today; a minor one, but still - W T flying F? This is middle-coast, not west coast. And now there's a possibility of tornadoes?!? Some have already touched down in more rural areas. I'm about as calm as a Mexican jumping bean double espresso sugar cookie, I swear.

So, we're closing the shop for the weekend and battening down the hatches. Hopefully, I'll be able to read to help pass the time...

*It was believed for a long time, and beginning in the 17th century, that The Knight of the Burning Pestle was co-authored; more recent scholarship tends towards attributing sole authorship to Beaumont.
Posted by Bookphilia at 23:19

Seriously, Colleen. I don't get it. STOP READING. I don't understand why it's so hard if you're not enjoying it.
You're doing neither yourself nor the authors any favours by mercy fucking their books. Stop reading. Stopreadingstopreadingstopreading.
Start baking. Or gardening. Or drawing. Or cycling. Watch the discovery channel. Surf the net. Take up embroidery. Adopt a chimpanzee. Just. Stop. Reading.

I still think you should give manga a try. It will clear out your brain and give you a break from reading regular novels. Or how about a fun, short novel like Prisoner of Zenda?

I have never heard of Knight of the Burning Pestle before but it sounds like a hoot. Sorry your reading funk continues. I had a bit of a funk last summer and the book that lifted me out of it was Elizabeth von Arnim's Enchanted April which I followed up with rebecca by Daphne du Maurier and that cemented the lifting of the funk. I hope all around your shop remains calm during the G20 meetings!

Celine: Well, it's like this. We have no yard, so gardening's out. It's much, much too hot to bake, although if I loved it *very* much I'd do it anyway. There was a part of last night's post I cut but maybe shouldn't have; it went something like this: "I have no hobbies, interests or talents outside of reading. None to speak of anyway." I hate tv, except for things narrated by David Attenborough. BUT I will ride my bike like a fiend this weekend, if the weather cooperates, which it hasn't been lately.

Seriously, Celine, I take your point - especially because of the disturbing metaphor you use; that's why you're a writer and I'm not! - but nothing grabs me, you know? I really am a boring old one trick pony.

heidenkind: Okay, recommend me some manga. I wouldn't have a clue as to where to start.

Stefanie: I have a Daphne du M book here; perhaps I'll try it.

Do you like non fiction btw? I adore it. Its about the only thing I can read when I'm on a project. How about some juicy biographies or histories?

Me too - Revecca is a fantastic book and there is a film as well..

Well, your reader's block hasn't affected your descriptive powers. "The Knight of the Burning Pestle" is exactly that awesome. Neither Shakespeare nor Jonson nor anyone I know of before Tom Stoppard wrote anything quite like it.

I'm with Celine. Yoga? Swimming? Some kind of handcraft? If non-fiction fails, what about poetry?

Ha, I love that you went to a Renaissance play to try and break your Reader's block...who would do that? Oh, wait..

I grab Austen when I can't stand the look of anything else. Tends to work for me.

Hey Celine and Hannah: I tried to get Rebecca out of the library yesterday but their only copy had pages missing! I started Howl's Moving Castle though and that seems to be working for me.

Kevin: You have no idea how much I'd like to go on a bicycle date with David Attenborough. Or, to just have him narrate my life.

Amateur Reader: Have I ever told you that you're my reading hero? You read EVERYTHING. You rock.

Ying: I was thinking of yoga actually because, why not? I will try to explore other things. My interests are ridiculously limited.

verbivore: Haha, just me I suspect. But if there is someone else out there reading Renaissance plays to break their reader's block, I'd really like to meet them...and demand satisfaction from them.