The difference between good men and scoundrels

In The Good Man Jesus and the Scoundrel Christ, Philip Pullman re-imagines the rise of Christianity as resulting from a series of carefully orchestrated events and consciously rewritten histories; history is re-imagined in the service of the "truth", the "truth" being something that transcends the merely actual:

Who speaks this mush, you ask? It may be an angel or it may simply be a very wily bureaucrat (or they're one and the same); all we know for sure is that it's a mysterious stranger who convinces Christ to record his brother Jesus's words and then make them better, for posterity and to help create a church for the ages. That's right, there are two of them. Mary gives birth to twins, one sickly little crinkle-face she calls Christ and one robust little caterwauler she calls Jesus.

The boys grow up together and Christ is a smart 'un, very good at quoting scripture and saving Jesus's butt, and Jesus is a punk-ass little kid that everyone likes and who does dumb stuff and gets into trouble. It seems like Christ should be the saviour but, in fact, people think he's a little weird and also he has no charisma. Later, Jesus has a spiritual awakening and starts preaching. The thing is, he says and does most of the things Jesus is credited with saying and doing, but he's also kind of a jerk and is mean to his family and is a bit racist. Christ loves his brother but can't get Jesus to listen to his notions about institutionalizing his good ideas and so just follows him around, copying down everything he says, and improving it as per the bureau-angel's instructions.

So, why is Jesus a good man and Christ a scoundrel when Christ is small and fearful and Jesus is big and compelling but still kind of a dick? Well, for one thing, Judas wasn't real; it's Christ who betrays his brother, but in a hapless, dumb-ass sort of way. Also, he's sacrificing Jesus's real words and actions to the needs of a religious monolith in the making; he's amplifying, elevating, adding pretty touches, and generally taking the human out of his brother and making him divine, for as he's told, this is the only way anyone will remember Jesus anyway; the angelcrat says to Christ:


"You told him that peopled needed miracles and signs; you told him of the importance of dramatic events in persuading them to believe. He didn't listen, because he thought that the Kingdom was coming so soon that no persuasion would be necessary."
...............
"But the Kingdom," said Christ, "the Kingdom will come!"

"No," said the angel, "there will be no Kingdom in this world. You were right about that as well."
"I never denied the Kingdom!"

"You did. When you described the church, you spoke as if the Kingdom would not come about without it. And you were right."

"No, no! I said that if God wanted to, he could bring the Kingdom about just by lifting a finger."

"But God does not want to. God wants the church to be an image of the Kingdom. Perfection does not belong here; we can only have an image of perfection. Jesus, in his purity, is asking too much of people. We know they're not perfect, as he wishes them to be; we have to adjust ourselves to what they are. You see, the true Kingdom would blind human beings like the sun, but they need an image of it all the same." (pp. 170-71)

God and his minions don't think humans are capable of transcending themselves, in other words, and so playing on their weaknesses rather than playing to their strengths is the way to go. It's cynical and cruel and Christ believes in his brother but he is also horribly compelled to do his literary duty as "the word of God." Christ appears to be rather talented in his literary stylings and here we have Christianity going strong 2,000 years later, all because of him...

Jesus, on the other hand, he likes to keep it real. He says what he thinks. If you're talking mush, he'll call you on it. But the fact is, he's not the son of God. God doesn't listen to him, doesn't talk to him and, he finally realizes, doesn't really give a flying f*** about him or anyone else, for as we already know, God just wants his gilt-plated bauble on earth to be established ASAP to keep people quiet. In the meantime, the only person who loves the world as it is is Jesus:


"...you made this world, and it's lovely, every inch of it. When I think of the things I've loved I find myself choking with happiness, or maybe with sorrow, I don't know; and every one of them has been something in this world that you made. If anyone can smell frying fish on an evening by the lake, or feel a cool breeze on a hot day, or see a little animal trying to run around and tumbling over and getting up again, or kiss a pair of soft and willing lips, if anyone can feel those things and still maintain they're nothing but crude imperfect copies of something much better in another world, they are slandering you, Lord..." (p. 193)

I love that Jesus is a bit of a hippy and not at all asexual. But this speech isn't really in keeping with his preaching and being a jerk to his family. It could be that Pullman's just showing how you can be a messed up human and a spiritual giant at the same time, in spite of what those cynical angels say for their cynical Boss. Or, it could be that Pullman didn't write a very good book.

I wanted to like this book; after His Dark Materials, I want to like everything Pullman writes but so far, I've liked much less than I've disliked and I'm afraid that The Good Man Jesus and the Scoundrel Christ has made the "dislike" pile that much bigger. I fancy the idea of this book, in part because I'm always in favour of retelling old stories in a new way. And Pullman (or his publisher) really wants you to know that this is a story, for on the back cover of the book it tells us that this is precisely what this is. 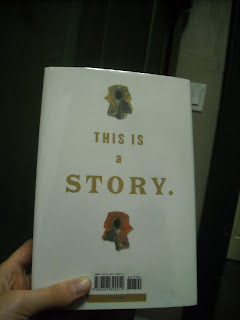 Given the hullabaloo Pullman continues to stir up over what he's apparently saying about God in His Dark Materials, it might be fair to remind people that he's not a biblical scholar, but rather a fiction writer. However, having read the book, I find myself wondering if this back cover reminder was needed because it's not a very good story, in Pullman's hands. The writing is literate and grammatical but in no way magical; further, the characters seem entirely flat, and their motives uninteresting. Maybe the worst thing about this book, though, is that it reads to me, overall, like the stunted love child of Kahlil Gibran's The Prophet and an essay geared towards simultaneously taunting Christians and exonerating Pullman for being unfairly accused of doing so.

There's one passage in particular that gives rise to the latter half of that unflattering simile above. The angelcrat has come to visit Christ later, after he has abandoned his identity and started over somewhere else. Christ complains about the new ritual of the Communion, eating the body and blood of Christ, because it was not something he intended in his writings. The angel blithely tells him it's his own fault for being too subtle, and "People will leap to the most lurid meaning they can find, even if it's one the author never intended" (p. 240). This seems like a rather extreme response to a relatively minor complaint, especially given that the institutionalization of his brother's values is going very smoothly indeed, and precisely because of how Christ inserted all that truth into the history.

What I find fascinating about this statement is that it seems to indicate that the re-writing of history is not the problem at all, but rather readers' inability to process it properly. In which case, the cynical view of the angel was right - things need to be dumbed down for people to get what authors mean. And given that The Good Man Jesus and the Scoundrel Christ is pretty much completely lacking in either the wonder (Jesus) or the subtle intelligence (Christ) of Pullman's best work, neither character or point of view is validated - and nothing else is either, because as a story, this book just isn't good. I may never read Pullman again, not because this book is atrocious, because it's nowhere near that - but because it's mediocre, and mediocre is the only word I have to describe everything Pullman's written since The Amber Spyglass. Sigh.
Posted by Bookphilia at 23:01

*cries a thousand tears* Has he written other good things pre-HDM? Is I Was a Rat any good? Or should I just throw the man over now? The Ruby in the Smoke disappointed me in a big way.

I loved this review from "sickly little crinkle face." I wish I could reach out and gently remove the chip from Phillip Pullman's shoulder when he wasn't looking, so that he didn't know it was gone--just had an unexplained feeling of lightness and an urge to get to his writing desk.

Raych: I don't know about post-HDM, but I really, really like I Was a Rat! and I love Clockwork. But that's it.

Trapunto: Haha, thanks. And I wish you could gently remove Pullman's unfortunate shoulder-pads as well. Sigh.

heidenkind: Well, no. But it's not very enjoyable.