Keeping your friends close and your enemies closer 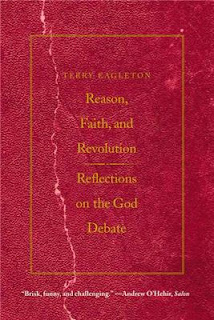 Early on in Reason, Faith, and Revolution: Reflections on the God Debate, author Terry Eagleton writes this pithy and extremely quotable snippet:


There is a document that records God’s endless, dispiriting struggle with organized religion, known as the Bible. God the Creator is not a celestial engineer at work on a superbly rational design that will impress his research grant body no end, but an artist, and an aesthete to boot, who made the world with no functional end in view but simply for the love and delight of it. (p. 8)

Both in and out of context, this passage seems unforgivably unoriginal or embarrassingly Pollyanna; at the very least, it would initially seem to mark Eagleton’s book as a mystical rather than an intellectual document, and therefore geared towards directly contradicting the works of the most famous of those writers known as the New Atheists, Christopher Hitchens (God Is Not Great) and Richard Dawkins (The God Delusion). It would seem that Eagleton has seen these authors’ dichotomization of science and religion and is confirming it, but from the other side of the divide.

In fact, I believe this passage, is actually a rather cagey example of what is known as a straw man. It may be that Eagleton believes that God’s creations are lovingly created works of art, but that’s beside the point. Appearing to set up a clear distinction between reason and faith, it is reason and its formal applications (particularly in academic and/or highly specialized scientific arenas) that are apparently being disparaged. Yet, Eagleton also slyly ridicule formal religion, leaving only a God who strikes one as surprisingly sensitive and decidedly New Age.

What remains, in other words, is a confident pseudo-mystical assertion that follows claims about the inadmissibility of all assertions made with any sort of confidence. Why do this? First and foremost, I suspect, in order to set up the focus of his prolonged critique of the methods of the New Atheists; he is engaging, for a brief and maddening moment, in the sort of self-satisfied but half-formed sort of argumentation for which he takes Hitchens and Dawkins so thoroughly to task in the remainder of the book. He is showing just how sloppy their unfinished and unreflective rejections of religion look like from the other side; based on the quotations from their books he provides here, however, Eagleton does so with a great deal more rhetorical finesse. This is not a book which focuses primarily on addressing yes or no questions in relation to religion versus science; it is a book about raising the stakes and modes of this debate.

(I should note here that not only have I not read either Hitchens’s or Dawkins’s books, but also that I will likely never do so. This is not a topic in which I am, in fact, at all interested. I’ve read Eagleton’s book for two reasons completely removed from either its perspective or the perspectives of Eagleton’s opponents: 1) It was gifted to me from my brother, who is extremely interested in this topic; and 2) In spite of my the reader’s block I was suffering from when the book arrived in the mail, a glance at the first two pages hooked and cured me simultaneously, and solely because Eagleton is so clearly as hilarious as he is erudite and linguistically gifted.)

Straw men comprise a large part of what Eagleton writes against in Reason, Faith, and Revolution. While he does in many instances take on specific aspects of Dawkins’s and Hitchens’s arguments, his concern is primarily with what he perceives as a dangerously pervasive laziness with regards to research, argumentation, and self-reflection underpinning their now famous works:


This straw-targeting of Christianity is now drearily commonplace among academics and intellectuals – that is to say, among those who would not allow a first-year student to get away with the vulgar criticisms in which they themselves indulge with such insouciance. Ditchkins on theology is rather like someone who lays claim to the title of literary criticism by commenting that there are some nice bits in the novel and some scary bits as well, and it’s all very sad at the end. He thinks, for example, that all Christians are fideists, holding that reason is irrelevant to faith, which is rather like believing that all Scots are stingy. (Ludwig Wittgenstein, incidentally, had the rare distinction of being a fideist without being a believer.) Hitchens’s God Is Not Great is littered with elementary theological howlers. We learn that the God of the Old Testament never speaks of solidarity and compassion; that Christ has no human nature; and that the doctrine of the resurrection means that he did not die. In a passage of surreally potted history, Hitchens seems to hold the obscure Jewish sect of the second-century BC known as the Maccabees responsible not only for the emergence of Christianity but also for the advent of Islam. It is surprising that he does not pin Stalinism on them as well. For his part, Dawkins seems to believe that Paul was the author of the epistle to the Hebrews, and that to say that Jesus was the son of God means that he was omniscient. The sagacious advice to know your enemy is cavalierly set aside. (pp. 52-53)

Here is the key both to Eagleton’s approach and to his arguments: “The sagacious advice to know your enemy is cavalierly set aside.” Reason, Faith, and Revolution both displays Eagleton’s clear knowledge of his enemies, Dawkins and Hitchens, who both appear to lack a clear lack of such understanding of their enemies – their enemies including both religion itself, as well as those who come out in favour of it. (And lumping all who come out in favour of it, from murderous fundamentalists to highly educated theologians and everyone in between, appears to be only one aspect of this failure to look closely at what they rail so virulently against.)

Eagleton’s rhetorical advantage is thus threefold. Not only does his book reveal how well he knows his “enemies” by highlighting the outrageous extent to which they do not know theirs, but it does so in part by showing where Dawkins and Hitchens actually get things right – a generosity of fight and rhetoric neither of them appear to offer at all. If Eagleton “wins” (a term I don’t think he would feel comfortable with, even though he does invoke, albeit somewhat ironically, that very primal notion of “enemy”), it’s not simply because he is a better writer and thinker than they are, but also because he enacts some of the generosity he insists lies at the heart of any meaningful manifestation of Christianity, which is really, even if only in its ideal rather than actual state, all about how people interact with one another.*

For the most part**, Eagleton focuses on being, if not polite to his opponents, at least respectful enough of their projects and claims to address rather than simply dismiss them out of hand, with a scornful flick of the rhetorical wrist. Indeed, what is both most laudable about Eagleton’s critique of New Atheism is that unlike Dawkins, he is more than happy to admit that it’s precisely because of his enemies that he has this work to do in the first place: “Without God, Dawkins would be out of a job. It is thus particularly churlish of him to call the existence of his employer into question” (p. 9).

Of course, Eagleton is being somewhat flip here but he also, quite seriously, never lets go his rhetorical advantage. At the very point at which he acknowledges his indebtedness to Dawkins and Hitchens he reminds us, once again, of exactly the sorts of blunders they repeatedly make – that is, to fail to engage fully with those against whom they inveigh:


One of the more agreeable aspects of Christopher Hitchens’s polemic against religion is that he is properly unafraid to declare that he thinks it poisonous and disgusting. Perhaps he finds it mildly embarrassing in his new post-Marxist persona that “Religion is poison” was the slogan under which Mao launched his assault on the people and culture of Tibet. But he is right to stick to his guns even so. Beliefs are not to be rejected just because they are beliefs. Societies in which any kind of abrasive criticism constitutes “abuse” clearly have a problem. “Abuse” is one of the latest American buzzwords, including as it does such unpardonable offenses as conducting a heated argument with someone, or recounting unpalatable political facts which another person would prefer not to hear. (pp. 147-48)

How well this book refutes Dawkins’s and Hitchens’s arguments I can’t truly assess for as I’ve noted, I haven’t read their books; further, if Eagleton’s assessments of their research is correct, I have a better understanding of Christian history than they do (a terrifying notion, for I haven’t read the Bible in its entirety, much less studied the religion in any depth whatsoever)! This, however, doesn’t mean that I know enough to be sure that Eagleton himself isn’t making any theological blunders. I can say, that as a model of argumentative vigor and integrity, as well as surprisingly enjoyable read which manages, quite unusually I think, to convey complex ideas in readily comprehensible language, it is a fine specimen.

*“The non-God or anti-God of Scripture, who hates burnt offerings and acts of smug self-righteousness, is the enemy of idols, fetishes, and graven images of all kinds – gods, churches, ritual sacrifice, the Stars and Stripes, nations, sex, success, ideologies, and the like. You shall know him for who he is when you see the hungry being filled with good things and the rich being sent empty away. Salvation, rather bathetically, turns out to be not a matter of cult, law, and ritual, of special observances and conformity to a moral code, of slaughtering animals for sacrifice or even of being splendidly virtuous. It is a question of feeding the hungry, welcoming the immigrants, visiting the sick, and protecting the poor, orphaned and widowed from the violence of the rich. Astonishingly, we are saved not by a special apparatus known as religion, but by the quality of our everyday relations with one another. It was Christianity, not the French intelligentsia, which invented the concept of everyday life.” (pp. 18-19)

**The only point at which I feel Eagleton fails in this regard is in his constant referral to Dawkins and Hitchens as the hideous, double-headed Hydra he terms the “Ditchkins”. This is amusing, yes, but not only does it not add anything to his argument but to me it also shows that Eagleton is not as immune to the temptation to taunt his subjects as he ought to be, if he wants to ensure that his narrative transcends theirs in terms of both moral tone and maturity.
Posted by Bookphilia at 21:57

CURED!!!! I look forward to congratulating you in person.

Hi C, wonderful. Does Eagleton defend his thesis that "God the Creator is not a celestial engineer but an artist, and an aesthete to boot, who made the world with no functional end in view but simply for the love and delight of it"? I'm dying to know how he's extended our knowledge of the world. Lastly, does he mention by name the all-destroyer Kant and engage his arguments? Many cheers, Kevin

The book sounds intriguing but even better that you are cured of your reading slump! Who would have thought that it would be a book like this one this did it?

Ying: I look forward to being congratulated. And having the heat storm from hell end. Uggg.