Nostalgia reading, part two: danger on every side 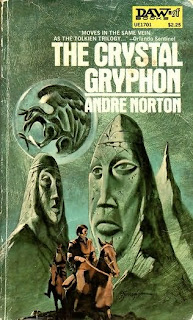 As I noted on Sunday, one of the dangers of reading backwards out of nostalgia is that a book you remember very fondly can turn out to be beyond horrible. Or merely lame. Lame and disappointing would be devastating enough. But here's a risk I hadn't anticipated: I've been thinking for the past few months of re-reading one of my favourite childhood/YA reads: Andre Norton and A.C. Crispin's Gryphon's Eyrie. In fact, I still have my original copy, which is a hardcover but has long being missing its dust jacket; it also displays my name and the date (May 12, 1988) inside the front cover, written in my angst-ridden, adolescent scrawl. As an artifact of my yout', I find it impossible to get rid of this book, so I may as well revisit it.

When I picked it up to consider reading it again (and I read it many, many times in the halcyon days of the late '80s, when my hair was tall and hard, my shoes pointy, and my arms concave) something about it (I can't recall what) suggested to me that I may have somehow failed to realize this was part of a series. I did a little interwebs research and discovered that not only is Gryphon's Eyrie part of a trilogy, it's the second book in the trilogy. Whatever OCD tendencies I may have simply wouldn't allow me to pretend I didn't know this; the only way to eventually re-read Gryphon's Eyrie was to read the first book first - which I have now done.

The Crystal Gryphon was penned in the early 1970s by Andre Norton only and apparently is a classic of high fantasy. It has a classic 1970s cover, in any case. I didn't care so much about that, obviously; what I cared about was finding out about Kerovan and Joisan before they're married and fleeing together through dangerous parts and making magics all over the place (book two). The narrative structure of Gryphon's Eyrie featured these characters telling the story in the first person, in alternating chapters, which I'd always believed was the result of two authors penning one novel together - it makes sense, in terms of divvying up the work. In fact, the first Norton-only installment has the same narrative structure, which surprised me, and which didn't always work (too much repetition of details at times); the similar structure, however, likely increased my reading pleasure in The Crystal Gryphon immeasurably since a significant part of what I liked as a kid about Gryphon's Eyrie was its constantly shifting viewpoint.

I can't comment yet on book two, but like I said, this doesn't always work in book one, and not just because of some repetition. Rather, what struck me most and irritated me to no end was Norton's inconsistencies in describing Kerovan's appearance. In Gryphon's Eyrie, Kerovan has cloven hooves instead of feet and golden, animal-ish eyes and maybe pointy ears. He's an edgy sort of Mr. Tumnus-esque hotpants, in other words, and more crucially, his odd appearance results a great deal in his and Joisan's successes and failures on their journey. So, colour me shocked and irritated when in the first half of the book, Kerovan does have cloven hooves but this is, we are repeatedly told, the only thing that differentiates him externally from other men. This is so adamantly insisted upon that when Kerovan wears his specially made boots, he can "pass" with no difficulty whatsoever. In other words, it's not just that we're given insight into how naive Kerovan is about the lies people tell him - he experiences this difference to be located entirely in his pegs.

But then I was shocked and more irritated in the second half of the book when we're told, from Joisan's point of view (confirmed later from Kerovan's p.o.v.), that in fact Kerovan does have those crazy golden eyes, etc. And this isn't merely a fact of him coming from parts foreign to hers, for the emissaries his father sends to make their marriage contract while they're still children do not have such unusual features. He is the only one like this, a sexy monstrous birth resulting from his corrupt and witchy mother's deal with the dark elements of the Old Ones; of course, her witchery is a partial fail for she does not produce a baby with a correspondingly dark soul. Kerovan's a good guy, which made his deformity all the more attractive to me when I was a bleeding heart 13-year old; it seems to have appealed to Joisan as well.

In case you're wondering about the plot, I'm not saying much about it because it's in no way remarkable. This is a fantasy novel with all the desired elements of fantasy novels, save characterological consistency and if Norton's to blame so is her coked up and sleep-deprived editor for missing something so crucial. What I'm saying is, I kind of enjoyed this book but would have enjoyed it much more for what it was if it'd been better handled before it was out of the printing gate. And given this major lapse, I'm doubly nervous about re-reading Gryphon's Eyrie!

This, however, won't be my third book for Nostalgia Week; in fact, I'm still deciding on what that'll be. I would like to get back to Stephen King's It, actually, but not only do I not have a copy at hand, it's also far too long (1,000+ pages). I am considering my beloved Bambi (Felix Salten) but am not sure I feel like bawling copiously and loudly this week. Then I was thinking A Swiftly Tilting Planet because I'd like to recapture my devotion to Madeleine L'Engle but then re-reading A Wrinkle in Time wasn't a match at all for my memories of it...I continue to fear my endeavour here, but will persevere. Onward!
Posted by Bookphilia at 15:23

--I think you can expect some hits from people doing a google search on these terms!

The hooves alone would really bother me. No one with hooves could pass. If the hooves replaced his whole feet, then his knees would have to bend backward, you know, like ankles--like cats walk on their toes and their "knee" corresponds to a human ankle. If they just replace his toes, but he still has the feet of a human and walks on them like human feet, I say they're not real hooves.

When I was about 8 I used to be obsessed with the TV show Beauty and the Beast, with that woman from Terminator. Anyway, the DVD set came out a few years ago and I really can't believe I enjoyed that show so much.

I guess there's no accounting for taste, even sometimes your own. :)

Trapunto: Heh, you may be right. Well, he could "pass" when he wore these special boots someone made for him. In retrospect, Norton wasn't detailed enough about the hooves, because I don't know if they extended up to his knee or were just hoof-y feet. In the pics in the second novel, they're the former, except that his knees don't bend backwards.

heidenkind: "there's no accounting for taste, even sometimes your own" - perfectly elucidated!

When I reread "A Swiftly Tilting Planet", I had apocalypse time-traveling dreams that were almost like nightmares, except for the fact that they were really, really cool. I wonder if anyone else has ever had that too...

I like this idea of nostalgia reading, except I find myself rereading my childhood favorites all too often. I don't think enough time has passed for there to be that nostalgic charm quite yet. Soon, maybe...