All its places were terrible places 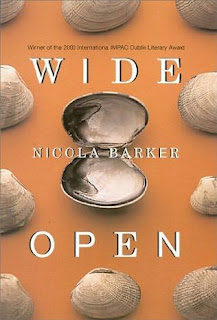 Nicola Barker is a really good stylist; her writing is almost always entirely delicious. I've begun to suspect, however, that this writerly delectation is, not a smokescreen exactly because that would require both a certain level of malice aforethought and Barker having any choice in her talent with words (which I doubt), but that it has, in the past, made up for a lot.

The problem is this: This is the fourth of Barker's books I've read (the previous being Darkmans, Heading Inland, and Five Miles From Outer Hope) and I've noticed something I wish I hadn't noticed - her books are really rather thin on plot. There is plot in all of them, of course, but it is loose, vague, and generally repeated in each (well, the four above) book. It goes something like this: Create several very strange and unique characters, preferably alienated from family/society/friends in some deep way, and then throw them together in unlikely and awkward circumstances and watch what happens.

What happens will be, without fail, hilarious, disturbing, touching, and enjoyable to read about - except that after you've read four, you won't remember any of the characters' names, much of what they did or said, or even in which book they did their doing and saying. If there's an exception, it's Darkmans, but that may primarily be because that was the first Barker novel I read; it would also be, in part, because of the evil, supernatural jester, which is an unusual sort of thing for her.

This is a serious problem, as far as I'm concerned, for a novelist who seems interested in dealing primarily with "human muck"* rather than, say, dazzling philosophical flights of fancy which may or may not be inspired by mind-altering drugs (yes, I am currently reading one of Murakami's "weird" books). If it's the muck you're interested in, Barker, it simply won't do for your pieces of muck to be so interchangeable and ultimately forgettable.

To engage with Wide Open specifically: It was, of course, very well written, but perhaps not quite as well written as the previous three on my Barker list. It was also rather obvious in its thesis statement, if you will. On page 5, we meet the novel's protagonists, Ronny and James, who have come together in the most Barkeresque of ways (James has been spending his time on an overpass waving at passing cars, and Ronny has been driving by him every day for 3 weeks; one day, James is not waving and Ronny pulls over to check if he's alright). Ronny considers James and notices some important details:


Ronny studied him. He seemed very young but his face was not a very young face. It was lined, vertically, and not in the places normal faces creased and wrinkled. It was as though he'd only just woken up from a hard sleep but his face hadn't shaken it, hadn't hurled off its sheets and its blankets yet to get on with the business of living.

He seemed ludicrously pliant and tractable, but singular. He seemed...Ronny shuddered at the thought...he seemed wide, wide open. But you couldn't survive that way. Not in this world. Not for long. Ronny knew it.

In fact he prided himself on being shut right up. Like an oyster. Like a tomb. Like a beach-hut in winter; all bolted, all boarded. Like the bright lips of an old wound. Resolutely sealed.

Aha! What we have as our unifying theme for the misfits we will meet in this novel is the ability, or lack thereof, to clam up and protect oneself and the consequences resulting therefrom. This would be more than fine if Barker, in the midst of all her really good writing, didn't throw in the exact phrase "wide open" every time something crucial occurred. I found this especially irksome because when her writing is obtuse it's not usually obtuse about the emotional repercussions of what's happening (it is, sometimes, obtuse about what is literally happening), so why such clarification would ever be required, I really can't think. Someone didn't trust us to get what she was doing; I hope it wasn't her.

All that said, I mostly really enjoyed Wide Open, but clearly, I need to wait at least a year before I read another of Barker's novels. You probably don't believe me so here's part of a section, seemingly rather innocuous and not related at all to the primary characters introduced above, but which I think may be the best moment in the novel. It's really good; it's excruciating. To me, it epitomizes what Barker can do; I can guarantee that I won't forget this scene, even if I am likely to forget the character who features in it. Why will I forget her? Because how she reacts her isn't a necessary result of everything else we know about her - because we know almost nothing about her.

Said character is Connie, a small sprightly woman who wades into the craziness fray; in this particular passage, she's trying to herd an obviously sick rabbit that's come into the kitchen back out into the yard, rather than either putting it out of its misery or taking it to a vet:


She dropped the fork, hating herself, and grabbed hold of a kitchen broom. She held just the end of it. Slowly, she edged her way around the table. She swept the bristles along, hoping that their approaching swish would comfort the rabbit and not seem too cruelly random when they eventually made contact with it. The rabbit didn't move. It remained close to the Aga, its nose twitching, its eyes bulging. The broom was soon merely a few feet distant, and then simply inches. Connie's hands began shaking. To prod it! And what if it ran towards her instead of away?

But it did not run. It did not jump. The broom touched it. Connie barely felt the weight of the rabbit before it was moving, and not voluntarily, it was swept along, all stiff and still lolling.

She felt ashamed. Past the table she swept it, past the chairs, the wicker basket, the lines of boots, the galoshes, up to the doorway. But she couldn't push it off the step and out into the darkness. No. There was a small metal rim at the lip of the doorway. The broom, the rabbit, came to a halt here.

She gave the broom a harder push. But the rabbit was stiff. It was lost in terror and in blackness. It would not move. All its places were terrible places. (p. 254)

What I've quoted reads as though this torturous refusal to help, in one way or another, a small injured beastie is going to go on forever - and the passage itself goes on for much longer than this quotation shows. Connie eventually lifts the rabbit out the door and closes it. She is small and cruel, yet Barker somehow makes it impossible to despise her because Connie knows she's pathetic, and is appalled by her fear and repugnance (at the rabbit, and then at herself for finding the rabbit repugnant), but still unable to respond differently.

I guess what it comes down to is that Barker is brilliant at creating moments, but not as adept at imaging what comes between those moments, which would allow them to make real and lasting sense. But I will still, eventually, read everything she's written because those moments are worth sifting through the fog for.

*David Mitchell mentioned his increasing interest in "human muck" at that talk I attended a few weeks ago, and cited Marilynne Robinson as one of its greatest devotees and practitioners. He did mention where he borrowed the phrase from but I honestly can't remember.
Posted by Bookphilia at 17:44

Eugh. Less rabbits and more plot for me. :)

Ugh. Such a simple thing, and yet so awful. I would not be able to stand very many such scenes. Too much like the worst parts of real life, I guess. It certainly makes you feel you are having the experience, not just reading about it.

I haven't read Nicola Barker, but I liked this review anyway because you really give a feel for what *kind* of a writer she is. I have some like that I go back to when I can't settle for something lively and weird and unsubtle (YA and fantasy and sci-fi are my reliable reads), but there's nothing truly wonderful on my radar. Most of the time I steer clear of those authors, because human muck has a tendency to generate humorless sentimentality. The one thing sure to spoil a book!

But I love the word aga. I might read Darkmans if I can count on "aga" coming up!

I've got Darkmans on my TBR list. That rabbit scene you quoted was very sad and horrible. Perhpas Barker will eventually figure out how to write between the scenes too.