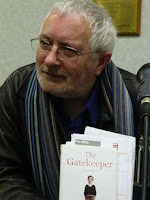 I have a theory which may explain why Philip Pullman’s latest offering, The Good Man Jesus and the Scoundrel Christ, is so disappointing – it was written in defensive response to a short (but incredibly damning) section of Terry Eagleton’s Reason, Faith, and Revolution: Reflections on the God Debate.

The passage in question begins with Eagleton’s thoughts on Thomas Aquinas’s view of God’s relationship with humans, refers briefly to D. H. Lawrence’s The Rainbow, and then drops this bomb:


God “has created us in his own image and likeness, since he himself is pure liberty. It follows that he is also the ground of our ability to reject him – which is to say that in a splendidly big-hearted gesture, he is the source of atheism as well as faith. He is not a censorious power which prevents us from being good middle-class liberals and thinking for ourselves. This is simply the primitive, Philip Pullman-like view of those who cannot wean themselves off the idea of God as Big Daddy. The poet William Blake would have had nothing but scorn for this naïve misconception. What writers like Pullman do not see is that the liberal doctrine of freedom derives among other sources from the Christian notion of free will, rather as the liberal belief in progress has a distant resonance of Christian ideas of Providence.” (p. 17)

I find it frankly shocking that someone as capable of very close reading as Eagleton clearly is would make such a shocking interpretive mis-step about Pullman’s views on religion, which are generally understood to be laid out in His Dark Materials trilogy. In fact, if Pullman attacks anything in these books, it’s most certainly and, I think, obviously organized religion, not God, he’s after. After all, God figures in the third novel only, and only very briefly at that – as a very frail and tired old man kept caged for the horrid purposes of ruthless bureaucrats like Metatron.  The countless threats of death and damnation over the years, not to mention, of course, his excommunication from the Catholic church, don’t arise from Pullman’s take on God so much as on his apparent evisceration of religion.

Eagleton certainly defends religion but he does so in a balanced way, being as willing to acknowledge both its current and historical failings as he is to insist upon how it may be used differently, and to better purpose. Given that His Dark Materials is a reworking of John Milton’s Paradise Lost, a poem to which Eagleton several times makes approving reference in Reason, Faith, and Revolution, this misunderstanding is doubly surprising. I can only conclude that it’s neither Pullman’s notion of God, nor his virulent rejection of a thinly veiled Christianity that really get Eagleton’s goat here. Rather, I would suggest that it’s Pullman’s creation of a world in which neither are necessary which offends him. Hitchens and Dawkins also claim that neither are necessary but as Eagleton has shown, and which I discuss in my previous post, they do so without a clear enough understanding of the things against which they inveigh.

Pullman is a different beast all together. Pullman not only has a very solid grounding in Christian theology but also in its most famous literary critique, Paradise Lost. Pullman doesn’t offer pat liberal-intellectual credos in opposition to being set spiritually adrift; his novels insist throughout, but particularly at the climax, that humans are so inherently spiritual as to require no guidance whatsoever. This is a radical notion that goes well beyond Eagleton’s claim that Jesus loves us just as we are; it insists this isn’t actually required, for we are sufficient, entirely, in both our beauties and our imperfections.

Eagleton appears to want his opponents to be formidable but when one is, he fails to engage in much the same way he takes the “Ditchkins” to task for. Eagleton may find such an accusation intellectually discomfiting, and he should. What I find most shocking is Pullman even bothering to respond to such scathe. Again, I’m just speculating that Pullman has read and responded to Eagleton’s book (2009) with his own (2010); I’m comfortable suggesting, however, that if Pullman has not read Eagleton’s book specifically, he has read something similar and apparently too galling to bear. The question is, why, after all this time, is the pressure finally getting to Pullman? His Dark Materials are some of the finest literary fantasy ever produced; that they rankled so widely and deeply is evidence, to me, of just how radical and I think compelling, his alternative view of our inner lives really is.

Pullman’s work iterates Teilhard de Chardin’s (1881-1955) observation that “We are not human beings having a spiritual experience. We are spiritual beings having a human experience.” Eagleton, in spite of all his apparently comfortable truck with the mystical, clearly believes that humans must be induced in some way to have spiritual experiences; Pullman’s His Dark Materials, on the other hand, sits firmly within the tradition of Blake’s mystical poetry, in which the spiritual is as inescapable as the air itself.

I can only conclude that central to Eagleton’s misconceptions about Pullman’s trilogy is that he hasn’t considered just how much genre matters. His Dark Materials is a capital-F Fantasy trilogy. It prominently features witches on broomsticks, talking bears who fashion their own armour, and a number of other elements which more than clearly enough indicate that whatever ideologies may lie beneath the story, it is still in fact a STORY and is meant to be read first and foremost as such. No wonder Pullman felt the need to paste this message so loudly on the back cover of The Good Man Jesus and the Scoundrel Christ; he doesn’t fear religion backlash per se, he fears militant, readerly incomprehension.

Fiction is not the same as polemic, essay, or dissertation, even if some of its ideas are polemical, etc. Fiction, it seems to me, generally ought to allow its authors some distance from what they write and indeed, it generally does. No one tends to believe that all of an author’s characters are damningly autobiographical – unless, of course, religion plays a central role. Then, somehow, this distance is allowed – or made – to disappear and authors are called to task for beliefs they may not actually hold.

Great post, Colleen! It makes me wonder if Eagleton has even read the Dark Materials Trilogy??? If it's "against" anything, it's very obviously organized religion--and even then I'd say only those who use religion to control people. I don't have a degree in theology or anything, but even I found that to be pretty obvious.

Perhaps Pullman feels the need to respond now that TGC has been turned into a movie and more people are being exposed to his ideas with the pre-formed idea that his books are atheistic?

It sounds like you are ready to have some rousing discussions with your brother.

I especially like the way you lay things out in the paragraph with the Tielhard de Chardin quote.

Really interesting post! I wonder if Pullman did write his latest book in repsonse to misreadings and misunderstandings like Eagelton's as you suggest? It seems that it is becoming increasingly difficult to talk about religion with the continuing polarization between fundamentalists and atheists. People who fall somewhere along the contiuum in the middle end up being pushed toward one end or the other which is very sad.

heidenkind: Yeah, the media has definitely run wild with Pullman's reputed (and reputedly vicious) atheism. Even if he is viciously atheistic, I don't think that should enter into either the analysis or enjoyment of his books.

Trapunto: Thanks! My bro is suntanning in Europe right now, like a bourgeoisie prince, and can't talk about books. It'll have to be me and the blog world. :)

Stefanie: What's interesting is that in his book, Eagleton tries to re-establish the grey areas between fundamentalism and atheism but maybe isn't entirely convincing about it...?