The terrible intimacy of history 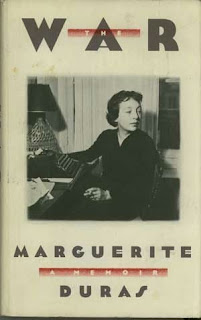 I recently read Marguerite Duras’s The War: A Memoir (translated from the French by Barbara Bray). To say I enjoyed it would be to gloss over just how disturbing this book is. It comprises a diary (written sometime after the actual events it describes) and several short pieces which appear to become increasingly fictional as the book progresses. “Truth” and “fiction” are words which seem almost entirely meaningless in relation to this particular text; even at its most clearly fictional, Duras reminds us that this book was borne entirely out of her experience of waiting in Paris, in the final days of World War II, for her husband to return – or to learn that he wouldn’t be returning.

This is a book, then, about the horrific nature of not knowing but needing to know the unknowable; of being desperate to discover that which can’t be borne. It is also about what it means to be a professional writer in a world in which reading and writing books become hideous reminders of a normalcy long subsumed in the terrible facts of war, both its quotidian deprivations and its varieties of genocide.

Duras begins the book by articulating a struggle with being who she is in a world that’s gone crazy, and as a result producing a book which is horrifying both for what it records and for the absences and losses it articulates:


I found this diary in a couple of exercise books in the blue cupboards at Neauphle-le-Château.
I have no recollection of having written it.
I know I did, I know it was I who wrote it. I recognize my own handwriting and the details of the story. I can see the place, the Gare d’Orsay, and the various comings and goings. But I can’t see myself writing the diary. When would I have done so, in what year, at what times of day, in what house? I can’t remember.
One thing is certain: it is inconceivable to me that I could have written it while I was actually awaiting Robert L.’s return.
How could I have written this thing I still can’t put a name to, and that appalls me when I reread it? And how could I have left if lying for years in a house in the country that’s regularly flooded in winter?
The first time I thought about it was when the magazine Sorcières asked me for a text I’d written when I was young.
The War is one of the most important things in my life. It can’t really be called “writing.” I found myself looking at pages regularly filled with small, calm, extraordinarily even handwriting. I found myself confronted with a tremendous chaos of thought and feeling that I couldn’t bring myself to tamper with, and beside which literature was something of which I felt ashamed. (pp. 3-4)

The deliberation and intellectual engagement involved in novel-writing and publishing are absent from The War; it as though history was writing itself through Duras, and not only did she barely notice it happening, but she also can only partially recognize the work, the words, as her own. It is only the physical evidence that confirms for her that she produced these pages.

In spite of this authorial alienation, The War is painfully intimate. Waiting for her missing husband, Duras invokes his body’s absence so closely as to make it seem more real than it probably could if he were present:


Suddenly it bursts in on me, the obvious: he’s been dead for a fortnight. Fourteen days, fourteen nights, abandoned in a ditch. The soles of his feet exposed. With the rain, the sun, the dust of the victorious armies all falling on him. His hands are open. Each hand dearer than my life. Known to me. Known like that to me alone. (pp. 9-10)

And, indeed, after Robert L., quite improbably and on death’s door, does return to Paris, Duras becomes increasingly distant from him until she finally tells him she’s going to leave him.

I’ve never read a book so profoundly, desperately, and despairingly emotional. I’ve never encountered writing so horrifyingly energetic, writing that made me think that it could either distract one from committing murder or suicide – or inspire them. That Duras can experience such close intimacy only with her husband when is not there is in the end not surprising, for the war has effectively skinned such relationships alive. As someone surviving and waiting and being kept company more by ghosts than by real people, the experience of living in a terrible moment in history becomes the most real relationship possible:


I think of the German mother of the little sixteen-year-old soldier who lay dying on August 17, 1944, alone on a heap of stones of the quai des Arts; she’s still waiting for her son. Now that de Gaulle’s in power, now that he’s become the man who for four years saved our honor, now that he’s to be seen in broad daylight grudging the people their praise, there’s something terrifying about him, awful. “So long as I’m there the firm will carry on,” he says. He’s not waiting now for anything but the peace; we’re the only ones who are still waiting, in a suspense as old as time, that of women always, everywhere, waiting for the men to come home from the war. We belong to the part of the world where the dead pile up hugger-mugger in charnel houses. It’s in Europe that this happens. That they burn Jews by the million. That they mourn them. America watches in amazement as the smoke rises from the crematoriums of Europe. I can’t help thinking of the gray-haired woman who’ll be suffering and waiting for news of the son who died so alone, at sixteen, on the quai des Arts. Perhaps someone will have seen mine, the one I’m waiting for, just as I saw him, in a ditch, when his hands were making their last appeal and his eyes no longer could see. Someone who will never know what that man was to me; someone whose name I’ll never know. We belong to Europe: it’s here, in Europe, that we’re shut up together confronting the rest of the world. Around us are the same oceans, the same invasions, the same wars. We are of the same race as those who were burned in the crematoriums, those who were gassed at Maïdenek; and we’re also of the same race as the Nazis. They’re great levelers, the crematoriums at Buchenwald, hunger, the common graves at Bergen-Belsen. We have a share in those graves; those strangely identical skeletons belong to one European family …. The Americans say: “There isn’t a single American now, not one barber in Chicago or farmer in Kentucky, who doesn’t know what happened in the German concentration camps.” The Americans mean to show us how well the American war machine works, how they’ve set at rest the misgivings of the farmer and the barber, who weren’t sure before why their sons had been taken away from them to fight on the European front. When they’re told about how Mussolini was executed and hung on butcher’s hooks, they’ll stop understanding and be shocked. (pp. 46-47)

Guilt, victimhood, incomprehension, isolation, hopeless waiting – these may be shared only with unknown people somewhere else, and with an historical moment almost tangibly alive with its own lurid and vicious concerns. Personal intimacy has gone the way of national or racial innocence, with the ability to feel safe in the world, with the ability to feel safe with oneself. All that’s left is a history that will eat you alive and writing that is so painful to produce that its author can’t even remember doing so.
Posted by Bookphilia at 13:10

War (good God, y'all... etc); obviously it's good for literature anyway. Jokes aside, it's important to read this stuff to keep alive the memories of how utterly stupid war is.

I, of course, often find myself looking at it (and its consequences) from the other side of the trenches. I'm currently reading another Remarque ('Drei Kameraden') and will be reviewing it soon along with McEwan's 'The Innocent' (set in Cold War Berlin).

Sounds very interesting! Not sure I want to read it, though...

This sounds like an amazing book. I've only read one novel by Duras, more a novella really, and quite liked it. I will add this one to my list!

Tony: I've somehow never heard of McEwan's The Innocent - is it a novel? I've read only Amsterdam, which I thought was atrocious, but think I should give McEwan another chance before giving up on him completely.

heidenkind: It's intense and painful but incredibly beautiful and the writing is, to use a horrible but in this case accurate cliche, more alive than almost anything I've come across. It's really worth reading.

Stefanie: I've previously read two of Duras's novellas and enjoyed them as well, but this really transcends them in terms of writing quality, I think. I'll be interested to know what you think!

Surprisingly, I also read this book a month ago. It was shoking, but probably one of the best books I read this year.

My God, those excerpts. Wrenching. Most particularly the last.

Smithereens: I think very highly of it too, obviously. How did you come across your copy? I hadn't even heard of the book until I saw a rather beaten up copy at a secondhand shop. I love the random browse and the new things it brings!

Celine: I know. The last passage haunts me. I keep thinking about it and then going back to read it.

Yes, one of his earlier novels. I've liked all three of his I've read (this one, 'Atonement' and 'On Chesil Beach'), but I am noticing a pattern: all are set in the past, feature lost loves and finish with a final section set decades in the future, showing consequences of the actions taken. We'll see if number 4 is the same...

Tony: Why do writers write the same book over and over? I personally feel that only Shakespeare and Wodehouse may be forgiven for this.